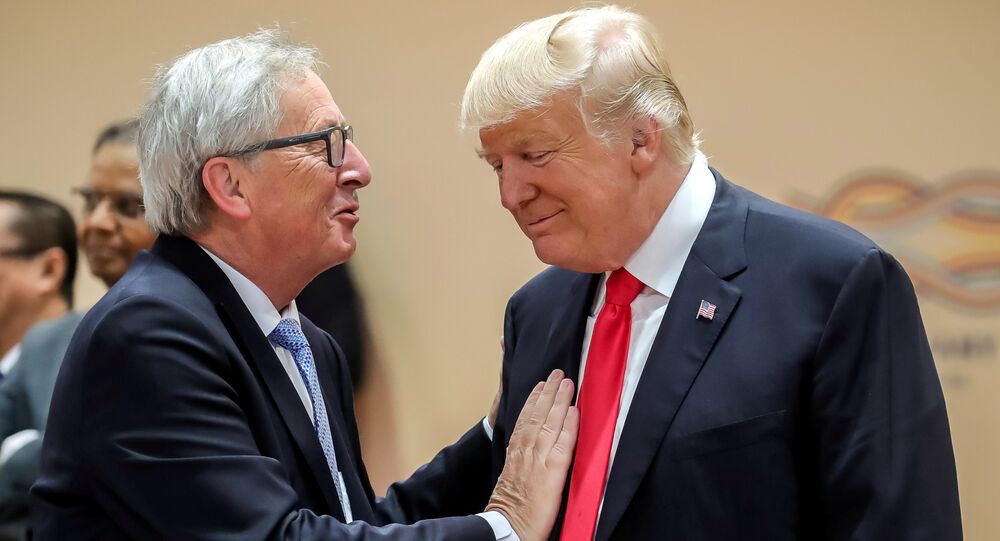 White House officials have been sending mixed signals regarding President Trump's stance on the new Russia sanctions bill. Political scientist Sergei Sudakov says Washington's uncertainty makes sense, since the bill puts the US and Europe on the path to a major trade war.

Amid a series of contradictory statements by White House officials, Moscow is seeking clarification on whether or not President Trump will sign the new anti-Russian sanctions bill approved by Congress last week.

On Tuesday, Secretary of State Rex Tillerson said that neither he nor Donald Trump were happy about US lawmakers' decision to approve a new package of sanctions against Russia, but added that the president would probably end up signing it.

"We were clear that we didn't think it was going to be helpful to our efforts, but that's the decision they made, they made it in a very overwhelming way," Tillerson said. "I think the president accepts that, and all indications are he will sign that bill and then we'll just work with it…We can't let it take us off track of trying to restore the relationship," he added.

The same day, on a stopover in Tbilisi, Georgia during his Eastern European tour, Vice President Mike Pence took a more aggressive tone, saying that Trump would sign the bill "very soon," and that the sanctions were "a very clear message that we mean what we say and say what we mean: that Russia's destabilizing activities in Ukraine, their support of rogue regimes like Iran and Syria and North Korea, that their posture has to change."

© Sputnik / Natalia Seliverstova
Kremlin: White House Makes 'Somewhat Contradictory' Statements on Anti-Russia Sanctions
On Wednesday, Russian presidential spokesman Dmitry Peskov said that the statements coming out of the White House were "somewhat contradictory," and added that Moscow is now waiting for a statement on the subject from President Trump himself.

Directly targeting Russia, Iran and North Korea, the new US sanctions package also has possible knock-on effects on Washington's European allies, whose companies' investments in the Nord Stream 2 energy pipeline project with Russia would make them subject to US penalties. Germany in particular is interested in the success of the Nord Stream 2 project, which would turn the country into a major energy hub for the supply of gas to Western Europe.

Earlier this week, German Foreign Minister Sigmar Gabriel said that there was "still time" for the US to consult with its European partners on whether it is wise to move forward with the sanctions bill.

The foreign minister stressed that the goal of Western sanctions against Russia was supposed to be to end the Ukrainian crisis and exert political pressure on Moscow. He vowed that Germany would rebuff any pursuit of US economic interests under the guise of sanctions, and take retaliatory measures if the EU's interests weren't taken into account.

© AP Photo / Markus Schreiber
German Energy Minister Considers US Sanctions Against Russia 'to Be Violation of Int'l Law'
Last week, European Council President Jean-Claude Juncker demanded an urgent review of Brussels' options for retaliation against Washington in the event that European energy companies and other business were targeted by the new US sanctions, stressing that the EU must "stand ready to act within days." Otherwise, he said, Europe might simply ignore the US restrictions, or even appeal to "WTO-compliant retaliatory measures."

Amid this back and forth bickering between Washington and Brussels, Professor Sergei Sudakov of the Russian Academy of Military Sciences said that the two powers have found themselves on the brink of a major trade war over Russia.

Speaking to Russia's Svobodnaya Pressa newspaper, Sudakov explained the new sanctions bill should be taken very seriously, since unlike earlier sanctions, its signature will prohibit the US president from being able to lift sanctions without congressional approval, thereby theoretically allowing for sanctions to remain in place in perpetuity.

"The fact is that we're talking not about sanctions, but about the concept of a trade war," the analyst said. "This is really a bill designed to protect the US market and manufacturers by all available means. Specifically, it is about forcing the Europeans to buy expensive American LNG gas. This is being done to strengthen Donald Trump's position, that of the companies behind him, and the energy sector in general, where he promised to create 25 million jobs. This is not a fast process, and Trump needs time to implement these plans."

Meanwhile, in Europe, quiet grumbling has turned to indignation. According to Sudakov, "behind it is the quiet resentment of Germany, the EU's largest economy. Germany's economic development has been on the decline recently. This affects the rank-and-file burghers, who have felt how severe the consequences of US policy can be for themselves. After all, Washington was the catalyst for the arrival of migrants to Europe, given that the US was the one to unleash the wars in Iraq, Libya and Syria."

In this situation, sanctions are the second stage, Sudakov said. "They lead to a situation where an already weakened Europe is forced to buy more expensive energy resources," despite the continent already having a supplier of cheap and plentiful oil and gas on its eastern doorstep with Russia.

Accordingly, the observer suggested that "today, we are on the verge of a big trade war, which Washington is ready to unleash with the EU for the sake of US interests. After Trump places his signature on the sanctions bill, it will signal that America has crossed the Rubicon, clearly dividing the whole planet between 'us and them'."

© AP Photo / Susan Walsh, File
US Congress Oblivious to Potential Blowback of Anti-Russia Sanctions
In this world, Sudakov said, the "Western world" will come to mean those countries "which buy into American values, American goods, American gas, and then everything will be fine and dandy."

Ultimately, the observer suggested that if Europe truly wants to withstand this new form of US pressure, its leaders must choose their allies carefully. "I believe that the voice of reason will prevail, and that Europe will gradually begin to break itself out from the US fold. It's worth recalling that Vladimir Putin recently listed Russia's strategic partners. China was in first place, and the EU second. I hope our European partners will hear these words."

As for European officials' hopes that the US would account for their interests after all, Sudakov said that he wouldn't bet on it, since this would mean that Trump would first have to veto the sanctions bill, which would put him in a war with the Congress for which he is not prepared.