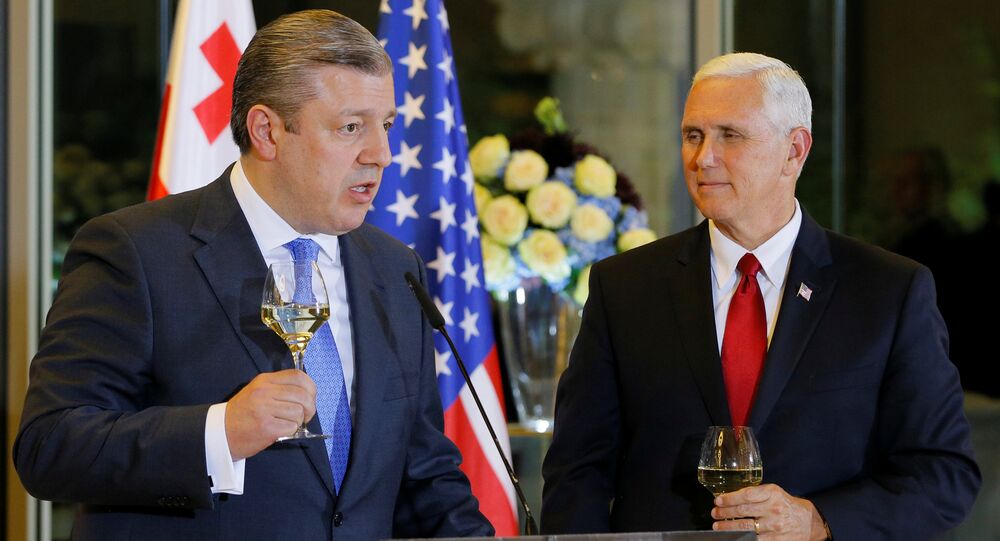 US Vice President Mike Pence said Tuesday during his official visit to Georgia that the United States supports Tbilisi's aspirations to become a part of the NATO alliance, adding that "one day" the small Caucasian nation will achieve this goal.

TBILISI (Sputnik) — The United States supports Georgia's ambition to join NATO and is thankful for its servicemen's participation in the alliance's missions, Pence said at a joint press conference with Georgian Prime Minister Giorgi Kvirikashvili.

"President [Donald] Trump and I stand by the 2008 NATO Bucharest statement, which made it clear that Georgia will one day become a member of NATO," the US vice president said.

Pence stressed that Georgia was "a key strategic partner of the United States of America" and that Washington has supported Georgia for over 25 years. He also added that Washington will help Tbilisi find a peaceful solution to Georgia's terrirtorial issues.

© REUTERS / Ints Kalnins
Moscow at Ease With Pence's Visit to Georgia, Estonia, but Worried About NATO Expansion
Tbilisi considers the regions two Georgian regions, Abkhazia and South Ossetia, as part of its territory though they declared independence in the 1990s and were later recognized by Russia.

Speaking of Russia, the US vice president said that Washington prefers to have a constructive relationship with Moscow, but believes it can only be achieved if the Kremlin reverses the actions that led to sanctions.

"As always, our country prefers a constructive relationship with Russia, based on cooperation and common interests, but the president and our Congress are united in our message to Russia: a better relationship, the lifting of sanctions will require Russia to reverse the actions that caused sanctions to be imposed in the first place. We hope for better days and we hope for better relations with Russia," Pence said.

The US vice president added that Moscow's latest response to Washington's sanctions — the demand for the United States Embassy in Russia to reduce its staff numbers — would not deter the United States' commitment to its own security.

The US vice president arrived in Tbilisi on Monday to meet with Kvirikashvili, Georgian President Giorgi Margvelashvili and other officials, as well as US and Georgian troops participating in the Noble Partner drills.