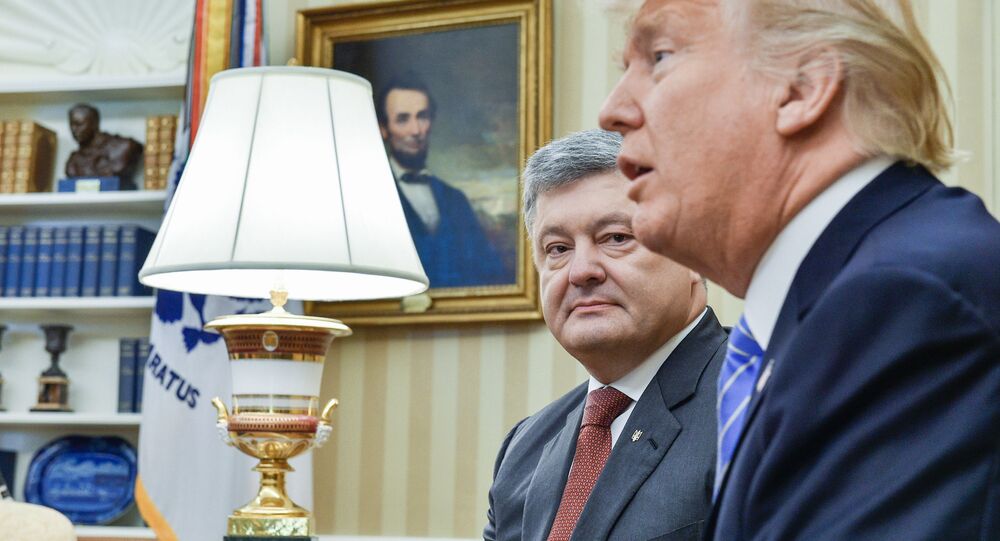 This week, Ukrainian President Petro Poroshenko paid a visit to the United States, meeting with senior US officials including President Donald Trump. According to Russia's Kommersant newspaper, Poroshenko tried to get Trump "materially interested" in the future of the frozen conflict in Ukraine's southeast.

Kommersant's interlocutors in Kiev revealed that preparations for Poroshenko's visit, including the details of his meeting with President Trump, were filled with uncertainty. According to one source, the Ukrainian side wasn't sure until nearly the last moment whether a meeting between Trump and Poroshenko would even take place. "This state of limbo created some nervousness," the source said. "We did not know the time nor the format of the meeting, and were ready for any option."

© Photo : President of the Ukraine Press-Service
Poroshenko Claims Negotiated Defensive Weapons for Ukraine With Trump
Because the meeting between Trump and Poroshenko took place in a 'drop in' format, and lasted mere minutes, the Ukrainian president was forced to present his proposals on enhanced cooperation with the US to Vice President Mike Pence, Secretary of State Rex Tillerson and Secretary of Defense James Mattis, Kommersant noted.

According to one of the paper's sources, the Poroshenko prepared a plan to try to "get the Trump administration materially interested in settling the conflict in southeastern Ukraine."

"Because Trump is a businessman, we are taking a business approach," the source said. "The essence of our proposal is that 90% of all the contracts for the restoration of the destroyed infrastructure in the Donbass will be given to American firms. But for this to occur, of course, it is necessary for the Donbass to return to Kiev's control. And this will not happen without active involvement from Washington, and without additional pressure on Moscow from the Trump administration."

The civil war in eastern Ukraine began in April 2014, when Kiev sent troops to quash protests that sprang up out of dissatisfaction to the new authorities in Kiev following the February 2014 Maidan coup d'etat. The subsequent war in the Donbass has claimed the lives of over ten thousand people, according to the UN, with millions more internally and externally displaced.

In early 2015, the leaders of Ukraine, Russia, Germany and France met in the Belarusian capital of Minsk to hammer out the Minsk agreements. Aimed at establishing a ceasefire, the agreements also laid down a series of steps to gradually reintegrate the separatist regions back into Ukraine, while providing them with special constitutional and other guarantees on local autonomy. The ceasefire has generally held, but Kiev has been accused of refusing to fulfill its obligations under Minsk, while blaming Moscow, which isn't even a party to the agreements, but only a guarantor.

What's Behind Poroshenko's Push for US Coal

Poroshenko Calls US a 'Co-Sponsor' of Ukraine's 'Success' Story