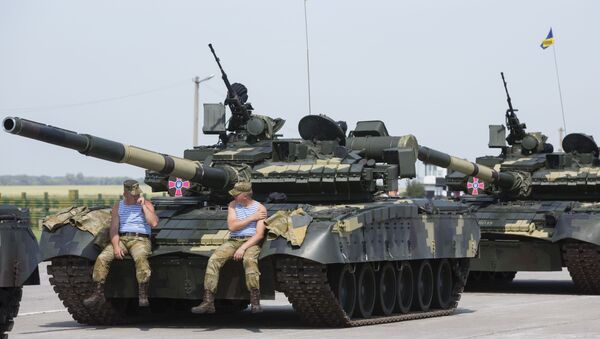 © Photo : President of the Ukraine Press-Service
/
Go to the photo bank
Subscribe

"We had a very effective negotiations for defensive weapons. We talked that we don't need to attack anybody but we want to have an effective mechanism to defend by radioelectronic warfare, by drones, by everything," Poroshenko told FOX news broadcaster in an interview, commenting on his Tuesday meeting with Trump.

Ukraine Parliament's Idea to Deploy US Forces in Country Risky, Russian MP Says
Since 2014, the United States has provided Ukraine with $600 million in military assistance, including training, equipment and reform advisory effort, according to the US Department of Defense.

In September 2016, the US House approved legislation to allow the supply of lethal "defensive" weapons to Ukraine, but the law still needs to be approved by the US Senate and signed by the US president.

Pentagon spokesperson Capt. Jeff Davis said in May that the Trump administration has not outlined any changes to the policy of not providing lethal weapons to Ukraine.

Poroshenko Calls US a 'Co-Sponsor' of Ukraine's 'Success' Story
On Tuesday, US Department of Defense spokesperson Capt. Jeff Davis said that the United States did not rule out the possibility of supplying Ukraine with defensive lethal weapons in the future.

Russian officials have repeatedly warned that Washington providing Ukraine with weapons will only escalate violence and will lead to more bloodshed.

The Ukrainian government has been conducting a military operation in the country's eastern regions since April 2014, after local residents refused to recognize the new government in Kiev. In February 2015, Kiev and the Donbas militias signed a ceasefire deal. Despite the agreement, both sides have been reporting violations of the ceasefire.