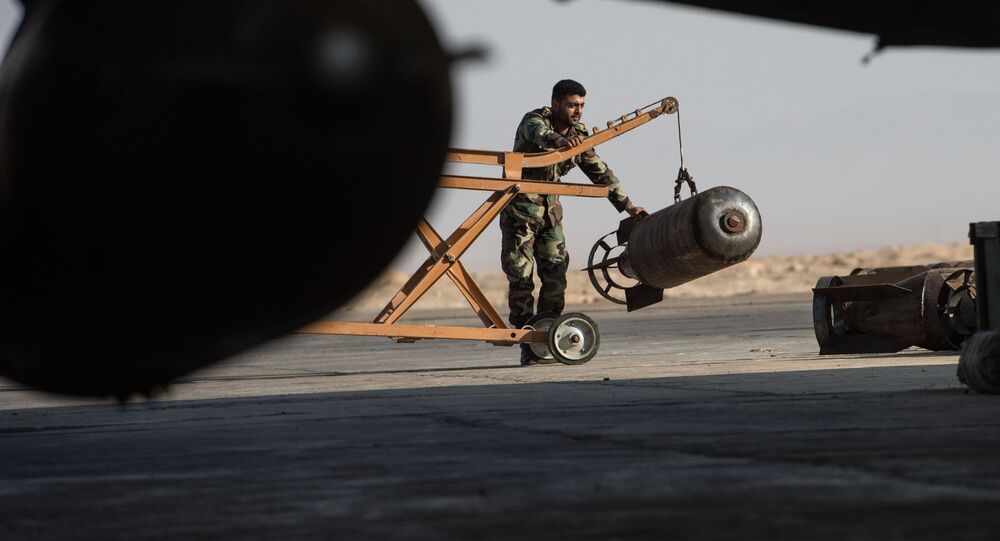 War Averted? 'US Probably Doesn't Want to Get Into a Fight With Russia in Syria'

On Sunday, a US jet shot down a Syrian Su-22 fighter jet. Moscow responded by suspending Russian-US cooperation over Syrian airspace, and promising to intercept any US-led coalition aircraft in Russia's area of operations in the country. Speaking to Sputnik, Israeli Syria expert Eyal Zizzer emphasized that the US does not want conflict with Russia.

The US warplane shot down the Syrian Su-22 near the city of Tabqah, Raqqa province, claiming that the plane had attacked Syrian Democratic Forces (SDF) positions. The Syrian Defense Ministry responded, saying the aircraft was bombing Daesh positions. An informed source at the scene told Sputnik that the Su-22's pilot has been rescued. Moscow responded to the act of aggression by suspending its memorandum on flight safety with the US over Syria, and promising to intercept any aircraft in the Russian Aerospace Defense Forces' area of operations.

© Sputnik / Anton Denisov
Aggression Continues: US F-15 Downs Pro-Syrian Government Drone Near al-Tanf
Moscow said that the commanders of the US-led coalition had not used the de-confliction channel with Russia to try to avoid the incident. Russian Foreign Minister Sergei Lavrov slammed Washington for its disregard for Syria's sovereignty and territorial integrity, and urged the US to avoid such unilateral actions.

Speaking to Sputnik about the likely rise in tensions between Moscow and Washington over Sunday's incident, Dr. Eyal Zisser, a professor of history at Tel Aviv University, said he doesn't think that the Su-22 shootdown really increases the chances of a major conflict between the major powers.

"I don't think it is the aim of the Americans right now to get into conflict with the Russians. There is, I assume, some sort of understanding with the red lines," the academic noted. "It's quite clear where everyone can and should cooperate. If this is not the case, in the coming days, since it's not in the interests of either Washington or Moscow to get into conflict, they probably will be able to contain the consequences," he added.

© AP Photo / IRIB News Agency, Morteza Fakhrinejad
Iran's Strikes on Daesh in Syria a 'Warning to Israel, US and Saudi Arabia'
Zisser admitted that one factor complicating the situation in the country is the fact that the lines of delineation aren't always clear, particularly as concerns the deployment of ground vs. air forces. "This will need to be discussed further, but I think that the general picture is that both Washington and Moscow are basically in agreement as to what should be done with regard to Syria," the observer said.

Asked how Sunday's incident could affect the overall strategic picture, the academic said that hopefully, very little. "As we know, the Raqqa area is planned to be liberated by Kurdish forces. The Kurds have open channels to the Russians and to the Americans, but right now the immediate support they get [comes from] the Americans…So I don't think it will have any effect," at least in so far as the fight against Daesh (ISIL/ISIS) is concerned.

© AP Photo / Hammurabi's Justice News
In Syria, US Wants to Show It Dictates the Law
Ultimately, Zisser stressed that Daesh continues to be a major threat, in Syria but also in neighboring Iraq, especially if the months-long campaign to liberate Mosul is anything to go by. "ISIS is a very dangerous phenomenon, and it is very difficult to crush it. It will take some time, but hopefully, eventually the international community will be able to bring this dangerous organization to its end."

As far as Syria is concerned, the academic noted that this country has long become a battleground for regional and global actors including Turkey, Saudi Arabia, the US and Russia; accordingly, for the anti-terrorism campaign in the country to truly succeed, and for the country's half-decade-long war to come to an end, all of these powers will need to reach some kind of understanding.

US State Senator: Syria's Assad Will Win 90% of Votes if Election Held Now

Syrian Air Incident: How Trump's 'Non-Interference' Talk Turned Out to Be Cheap

Above International Law: US Sends Global Message in Syria