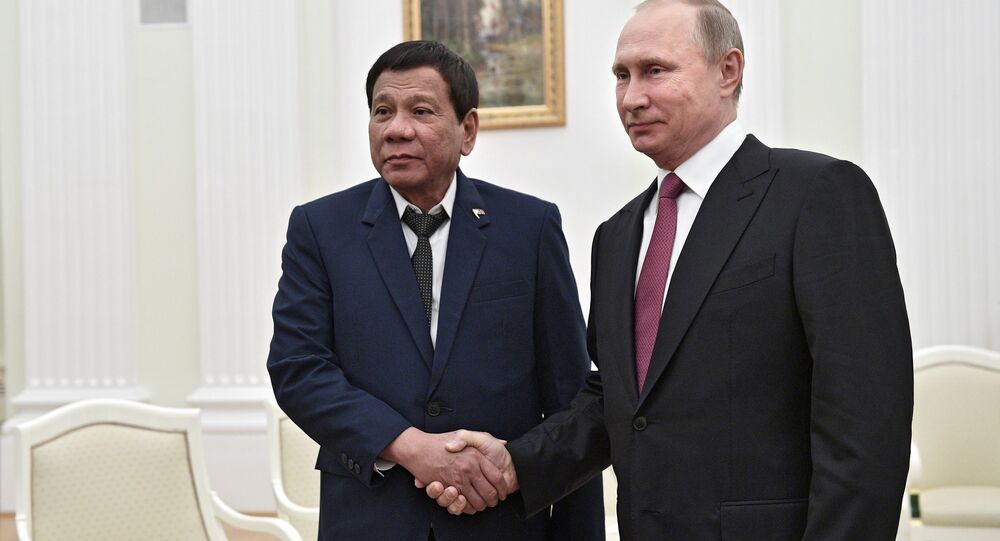 The Philippines President Rodrigo Duterte arrived in Moscow to meet with Vladimir Putin to expand partnership and ask for assistance in arms procurement. Sputnik Radio spoke with expert Dmitry Ofitserov-Belsky in an interview about how Russia should react to such a request.

© REUTERS / Kim Kyung-Hoon
Duterte's Visit to Russia: Philippines Wants to Avoid 'US Dictate'
According to Duterte, the Philippines needs modern weaponry to fight Daesh and expressed hope that Moscow would assist his country in obtaining arms.

“Our country needs modern weapons, we had certain orders in the US, but currently the situation is not very smooth and in order to fight Daesh divisions and its individual factions, we need modern weapons. I have come to gain your support and ask for your help,” Duterte said.

In addition, the leader of the Philippines said that the two countries should develop trade relations. “We need to develop trade exchange,” he said.

The Russian president in turn noted that Russia and the Philippines have many joint projects, including in terms of military-technical cooperation.

During an interview with Sputnik radio, associate professor at the Higher School of Economics Dmitry Ofitserov-Belsky said that there are various economic spheres in which Russia and the Philippines could successfully cooperate with one another.

“Despite the fact that there are a lot of projects, the overall trade between Russia and the Philippines is still small but there are some issues that concern common interests, for example, the cost of nickel in the world market,” Belsky said.

He further said Russia and the Philippines are one  of the largest producers of nickel ore and finished nickel.

“I think that Russia, for example, can help the Philippines in both developing and processing nickel ore on its own territory and that can stabilize prices for this resource in the international market,” Ofitserov-Belsky said.

According to the analyst, the president of the Philippines has every reason to state that the country needs modern weapons to fight against terrorist groups.

“This is a very serious risk. The Philippines is a multi-confessional country, on some islands there is an exclusively Muslim population that is rapidly radicalized. Currently, there is actually a war going on between the government forces and radical Islamists. It may be just the beginning of more serious problems,” Ofitserov-Belsky said.

According to the analyst, considering the situation with terrorism, it may of course be necessary to help the Philippines in this matter, but probably not in terms of the “first aid” as maybe Duterte was hoping.

“It could be by giving recommendations, perhaps, armaments, if, of course, we are satisfied with the conditions,” the analyst concluded.

Earlier, the Philippines' leader said that the country "would be the first to join" if China and Russia "will decide to create a new order." He also said that Manila intends to cooperate with Moscow and Beijing rather than with Washington, amid a rift in relations with the United States.

Such statements by Duterte have provoked suggestions that Manila is preparing a dramatic change in its foreign policy, including turning away from one of its main allies, the US.

Philippines' President Duterte: Conflict With China Would 'Be a Massacre'