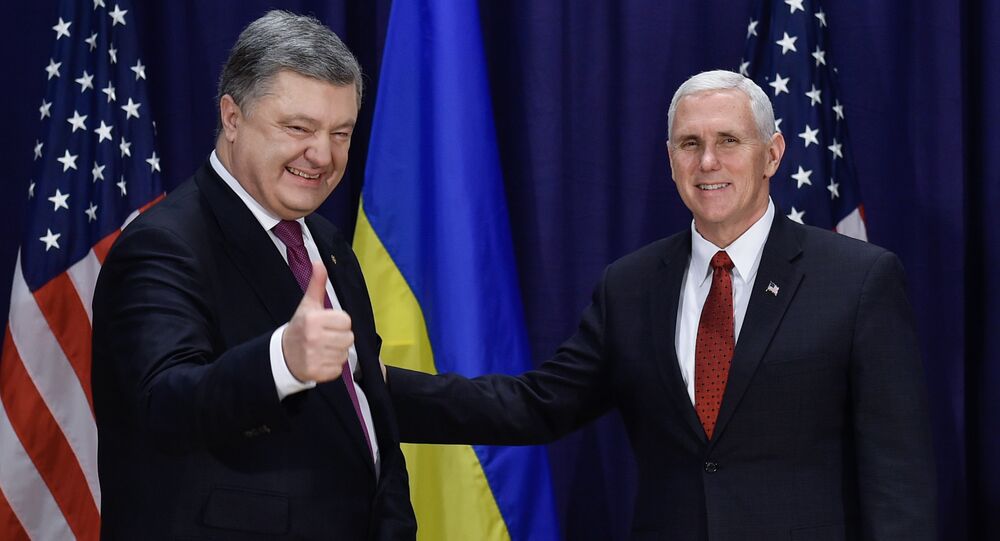 This week, Foreign Policy provided a glimpse of US President Donald Trump's ambitious plans to slash State Department and USAID funding by over $10 billion. Ukraine faces a hefty 68.8% reduction in aid, among the largest. Journalist Viktor Marakhovsky explains why the current political and media establishment in Kiev is terrified by the cuts.

On Monday, Foreign Policy magazine reported on a State Department document detailing US plans to cut its economic assistance to Ukraine by a whopping 68.8% in 2018. The proposed drop in spending would see assistance fall from the currently allotted $570 million to just $177 million.

The reduction is just part of the $10.1 billion in proposed spending cuts that the White House is considering in its effort to reduce unnecessary foreign spending. The US Office of Management and Budget explained that it's looking to "refocus" its activities "on priority strategic objectives." This includes major cuts to USAID. The agency is expected to face dramatic defunding, and effectively merged into the State Department.

In its own words, the Budget Office is looking "to reduce or end direct funding for international organizations whose missions do not substantially advance US foreign policy interests, are duplicative, or are not well-managed."

Ukraine, it seems, may soon fall into the category of nations where US spending does "not substantially advance" Washington's interests, in the Trump administration's estimation.

© REUTERS / Kacper Pempel
Better Off Without You: Is Trump Giving Up on Poland by Slashing Aid by 100%?
In percentage terms at least, Ukraine isn't the hardest hit in the proposed cuts. Poland, which currently gets about $3 million in so-called USAID Economic Support Spending, faces a 100% cut. Armenia, Azerbaijan, Belarus, and Montenegro are also facing a 100% cut in aid, with Albania and Moldova facing cuts of between 47% and 65%. The proposed slash in spending affects USAID to countries all across the world.

For a country like Poland, he noted, "$3 million a year won't have much of an impact on this sufficiently viable state. Those lucky fellows in Belarus who currently get $8 million for the 'development of civil society' have bigger problems. And it will be even sadder for Moldovan civil society activists, government officials, and so on, to lose their $15 million" in aid.

But for Kiev, Marakhovsky stressed that "losing $460 million will be a catastrophe of global dimensions, since Ukraine rakes in the majority of US aid slated for Europe, and in terms of scale is close to countries such as Afghanistan (which gets over $800 million), Tanznia (over $600 million) and Zambia ($436 million)."

"Unlike the above-mentioned countries, whose populations need first and foremost to be fed (and have their natural resources looked after), in Ukraine, USAID had developed a long-term effort to 'reformat' society, the economy and the state apparatus."

The long list of initiatives in these areas includes things like professional education initiatives, meant, in Marakhovsky's view, to train the 'right' kinds of journalists, officials, managers, etc.  It also includes programs to 'strengthen civil society' (including efforts by traditional USAID contractor George Soros and his Open Society Foundations), legal reform, media development, and political studies initiatives. Naturally, it also includes the 'OPORA' civil network (which provided direct funding for the activists-turned-fighters who clashed with police in the run-up to the Maidan coup), etc.

© Sputnik / Andrey Stenin
Maidan 'self-defense' fighters in Kiev's Independence Square
© AP Photo / Mikhail Palinchak/Presidential Press Service
Western Military Aid Pushes Kiev to Continue Donbass War - Russian Gen. Staff
For now, the journalist suggested that it's difficult to get a handle on just how many of Ukraine's major and minor political and civil society actors are being fed by US grants. "We can only guess just how much of the $463 million in possible cuts were planned for use on the creation of 'ideologically correct' content for Ukraine's media space."

A kind of benchmark has already been established by former Assistant Secretary of State for European Affairs Victoria Nuland, who admitted back in 2014 that the US had spent over $5 billion to assist Ukraine in developing its "democratic institutions" and achieving its "European aspirations."

As if to confirm Moscow's consternation about the US aid spending being designed to undermine Russian-Ukrainian ties, William Taylor, the former George W. Bush-era US ambassador to Ukraine, made clear this week that US aid money was explicitly designed to do so.

"One of the major themes, purposes and directions of US policy in Ukraine has been to encourage them to move toward European institutions. It's in our interest that they don't move toward Russian institutions," Taylor said, speaking to Foreign Policy about the 'dangers' posed by the administration's planned cuts to the USAID budget.

© Sputnik / Lugansk People's Republic people's militia
OSCE Mission Car Blast in Donbass: Accidental Explosion or 'False Flag' by Kiev?
Ultimately, Marakhovsky noted that it is important to emphasize that the proposed cuts in US spending were not an indication that Washington is 'dumping' or 'giving up' on its Kiev project. "It's just that the current administration wants to save some money, particularly on spending that is no longer considered a priority."

The journalist stressed that as far as the US is concerned, in Ukraine, "all the necessary operations have already been carried out. The Ukrainian government is more anti-Russian than that of any Western nation. So too is the media space and the political space. All the significant economic enterprises that could be taken under control have been. All those [industrial] branches that were once elements of the Russian defense industry no longer are, and many have already been liquidated. Further, Ukraine is in Europe, and it would be only fair, from the US point of view, if Kiev were to become the EU's headache."

The remaining $177 million, according to Marakhovsky, will be enough to support the institutions that the US considers relevant.

Finally, the journalist noted that "it's worth repeating that this is just the wish list of the Trump administration. In the past several months, we have seen how a unanimous bipartisan lobby among the US elite can pull the plug on Trump's initiatives, despite their powerful running starts."

For now, and until the 2018 budget is actually confirmed, Kiev has been left trying to make the best of a bad situation. On Wednesday, Ukraine's Embassy in the United States said that the reports of a 68.8% cut were erroneous, and that the actual proposed cut was only around 30%. The Embassy also expressed hope that US aid in 2018 would actually be raised by about $90 million.

'Direct Interference': Why US Military Instructors Stay On in Ukraine's Donbass

Kiev Concerned by Reports US Might Slash Financial Aid