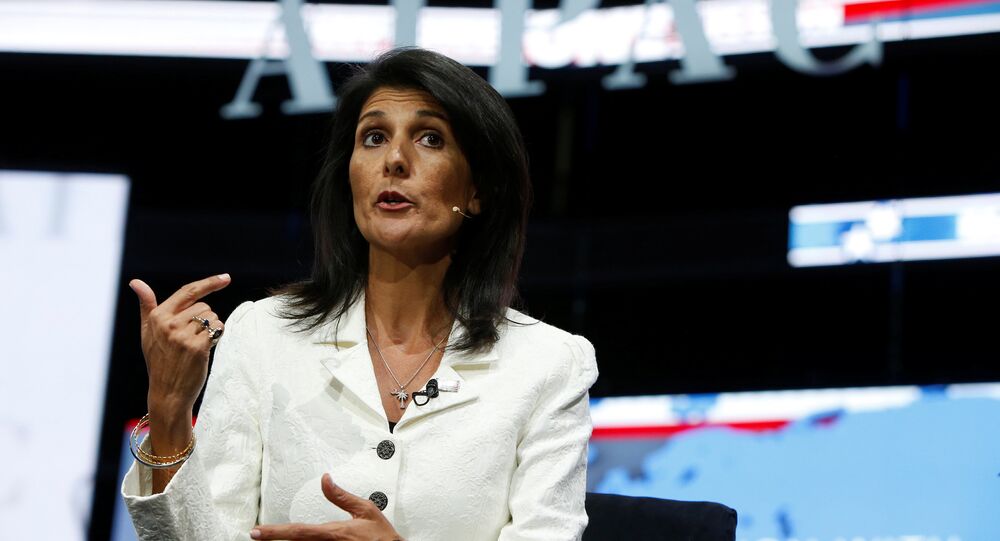 Last week, US UN Ambassador Nikki Haley made the preposterous claim that United States served as the "moral conscience" of the world, adding that she would strive to make the body an "effective tool" for promoting American values. RIA Novosti contributor Maxim Sokolov suggested that the envoy needs an urgent lesson in elementary diplomacy.

Last Wednesday, US permanent representative to the UN Haley suggested that the US was the "moral conscience of the world," and that Washington wasn't going to "walk away from this role."

"But we will insist that our participation in the UN honor and reflect this role," she added. The envoy stressed that she would work to make the organization an effective tool for promoting American values.

As expected, the statement was met with a barrage of criticism, both from alternative news media and commentators and from some foreign officials. The Russian response came from Foreign Ministry spokeswoman Maria Zakharova, who sardonically wrote on her Facebook page that "now it's clear what's happening on the planet: after every demonstration of American conscience, Russia has had to strain its brains to bring the world from the [brink]. Taking a look back at the results of US foreign policy of the last decade, one can assume that Washington is more suited to the role of another 'global' organ…"

© AFP 2020 / HO/SANA
Bashar's Brilliant 'Response' to US Ambassador Haley's 'Assad Must Go' Rant
"And another thing," Zakharova wrote. "The UN is not an instrument promoting America's or anyone else's values. The UN is a chance given to humanity to prevent new world wars, which come about as a result of an overabundance of feeling about one's own exclusivity."

Indeed, journalist and RIA Novosti contributor Maxim Sokolov suggested that "it's sufficient to recall the US's 'conscience' at work in Iraq, Syria, Libya, and many other countries, as a result of which these (admittedly imperfect) countries were turned into thresholds to hell, to confirm that Mrs. Haley's words were a bit much."

In fact, the journalist added, "thinking about what one says, and anticipating the possible reaction [from the other side] is the first duty of a diplomat, who, under the term's classical definition, is called upon to apply his or her mind and tact to international relations." Haley's statement lacked both, he stressed.

"Of course, in principle, Haley did not say anything new," Sokolov reflected. Back in August 2016, presidential candidate Hillary Clinton, in the course of her (seemingly) triumphalist campaign on the way to the White House, told voters that the United States was the "indispensable" and "exceptional nation," and the "last best hope of Earth," to quote  Abraham Lincoln. US alliances too were exceptional, Clinton insisted. "Russia and China have nothing close." "My friends, we are so lucky to be Americans. It is an extraordinary blessing. It's why so many people, from so many places, want to be Americans too," she said.

But there is a key distinction to be made, according to Sokolov, between speeches given to domestic audiences and rhetoric meant for foreign consumption. "Clinton spoke forcefully, but before her own, American audience, and this is not for us to judge. If the audience liked this, what else could we have expected from a candidate than pleasing speeches?"

© AP Photo / Files
Why Are Beijing, Washington Keeping So Quiet About Xi, Trump’s Upcoming Summit?
Haley on the other hand, was speaking to a different group, and subsequently has different responsibilities. "Her speeches – her position, are such that they should cause at least understanding from the peoples and governments of other nations," the journalist wrote, not antipathy and anger.

"The A-Zs of diplomacy state that the specificity of foreign policy lies precisely in the fact that it is foreign – i.e. it depends not only on one's own will, but also on the will of others." Other powers, Sokolov stressed, are unlikely to simply accept the dictates of American 'consciousness'.

Accordingly, for Mrs. Haley to truly succeed in her role, she will have to gain some elementary understanding of what her position is for (i.e. diplomacy, negotiation, consensus) and what it's not for (arrogance, spreading of dogmas, and attempting to strong-arm others).