Why Are Beijing, Washington Keeping Quiet on Eve of Xi, Trump’s Summit? 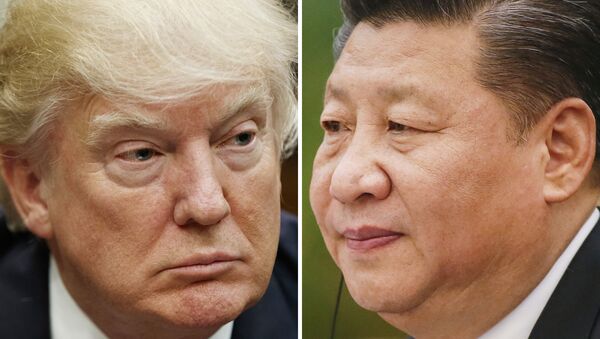 With Trump’s harsh rhetoric on the campaign trail, including his threats to impose a 45-percent protectionist tax on Chinese imports, it was expected that problems with US-China diplomacy might emerge following his election. And so they have, even before the Trump-Xi summit next week.

Trump Hopes China Will Help US Eliminate North Korea Nuclear Threat
US President Donald Trump is set to meet China's Xi Jinping, who will come to Trump's private Mar-a-Lago residence in Palm Beach, Florida on April 6 and 7. Considering Trump's repeated slams on China during his presidential campaign — accusing China of "raping" the US economy and unfairly imposing import taxes on American goods — there is no surprise that the summit is the focus of media attention.

But just days before the summit begins, unsettled problems remain. Despite the fact that the whole world knows about the visit, it has still not been announced officially, neither by the White House, nor in Beijing. Traditionally, official visits of between heads of states are announced weeks, if not months ahead.

"It is quite extraordinary that no confirmation has been made about the summit even after Tillerson's trip to China, which was aimed at paving the way for the Xi-Trump meeting," said Pang Zhongying, a professor of international relations at Renmin University in Beijing, according to a report by the South China Morning Post.

Observers note that this is a likely sign that the diplomatic bodies of the two countries are still trying to negotiate last-minute details, SCMP reported. And that likely means that there is a certain level of tension behind the scenes, kept away from the public eye. The two countries may be watching each other very closely, ready to cancel the summit should they feel threatened in some way.

The number of ways in which the meeting could go south is virtually uncountable. Between Trump's boisterousness and bravado and the Chinese strict adherence to ceremony and protocol, the White House protocol service is likely on pins and needles already.

China Hopes For Positive Outcome of Trump-Xi Meeting – Vice FM
For example, Beijing has already declared that Xi won't stay overnight at Mar-a-Lago. Instead, the Chinese leader will stay at Eau Palm Beach Resort and Spa, and will come to Mar-a-Lago for negotiations.

"China might want to avoid having its top leader staying at a place with strong elements of Trump's personal style," says Liu Weidong, a research fellow at the Chinese Academy of Social Sciences.

Liu also noted that China may also be trying to avoid being caught up in US criticisms of Trump's spending on expenses.

In Washington, facing fierce criticism at home, Trump may be looking to use the summit to give himself more presidential weight.

Many have noted the outcome of the summit should not be taken as a prophecy of the future for US-China relations, however. According to a review by SCMP's Liu Zhen, US President Barack Obama had an outstandingly warm meeting with Xi, having spent a total of eight hours with him over two days. It was hailed by Chinese officials as an "unprecedented breakthrough."

Despite that, we all know how it all went down last year in the South China Sea.