Turkish President Recep Tayyip Erdogan has railed against what he called European hypocrisy, insisting that he will continue to taunt European leaders with "Nazi" jibes, if they continue calling him a "dictator." His remarks come just weeks ahead of a major Turkish referendum.

© AP Photo / Axel Schmidt
Germany Considers Erdogan's Comparisons With Nazis 'Unacceptable' - Merkel's Spokeswoman
In the run up to a key Turkish referendum on 19 April, in which the Turkish President is pressing for more far reaching powers, Mr. Erdogan has maintained a defiant tone.

Key among Turkey's adversaries now, he tells his supporters at buoyed up rallies across the country, is European hypocrisy and Islamophobia.

In an interview with CNN-Turk on Thursday, 23 March Erdogan said:

"They accuse me then they speak of Erdogan as a 'dictator'…So I'll continue to address them in these terms."

His unapologetic stance comes despite a raft of European leaders condemning the Turkish President of referring to Dutch and German officials as "Nazis".

Earlier in the week, German media reported rebuttals from both Chancellor Angela Merkel, who branded Erdogan's insults as "unacceptable" and from new German President Frank-Walter Steinmeier, who urged:

"Stop these appalling comparisons with Nazism, do not cut the ties with those who want a partnership with Turkey."

On Wednesday he warned that Europeans risk being unsafe on the world's streets, as the crisis between Ankara and the EU showed no signs of abating. 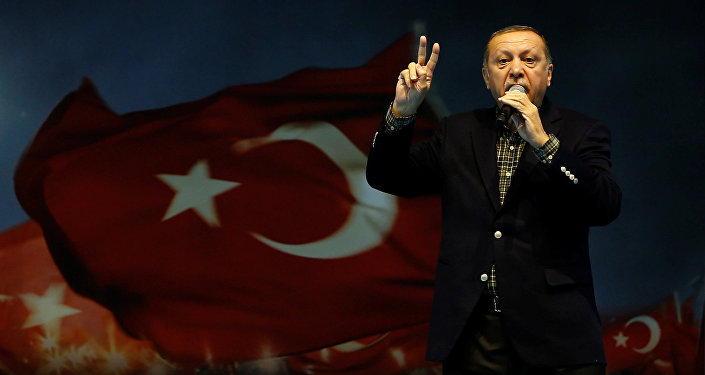 Critics of Erdogan have alleged that he is riling up anti-European collective anger as a means of unifying Turks against a common enemy, in a bid to get more votes in the referendum.

Earlier in March, at a referendum campaign rally, the president reeled off a list of European nations against which he was willing to stand.

"Let them try and hinder them. Whether Germans, Dutch, Austrians, Swiss, Belgians, Danes or whoever it is, know that your president has stood firm and will keep on standing firm," he said.

Erdogan claims that creating an executive presidency with the abolition of the prime minister's post would help Turkey deal with security challenges. 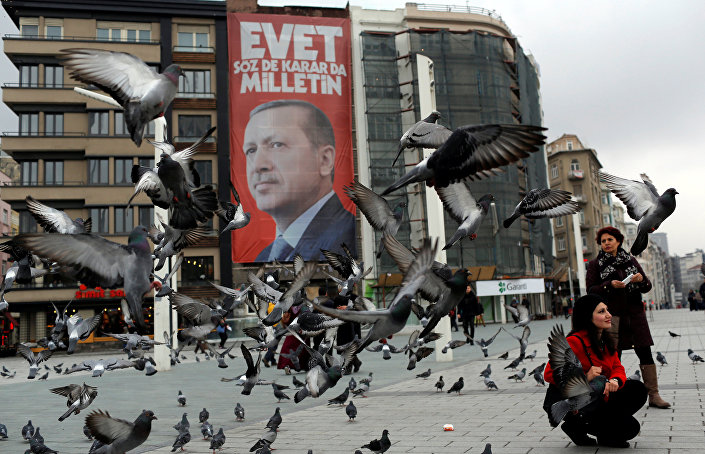 © REUTERS / Murad Sezer
A campaign banner for the upcoming referendum with the picture of Turkish President Tayyip Erdogan is seen on Taksim square in central Istanbul, Turkey March 15, 2017.

Meanwhile, Turkey's main opposition leader, Kemal Kilicdaroglu, has urged Turks to vote no in the referendum, warning that a yes vote could undermine Turkish democratic oversight.

Turkey is officially an EU-candidate nation but it' accession is looking increasingly like a distant dream.

What is real, however, is that the tit-for-tat diplomatic spat swirling around Turkey and the EU is unlikely to end any time soon.

War of Words Between Berlin and Ankara Worsens, Gets Personal