"This is the real essence of the current Ukrainian authorities: they cannot do anything well, they only spoil everything for everyone, even for themselves," Zakharova said.

Kremlin spokesman Dmitry Peskov commented on the issue: "This is truly tragic news. You know that yesterday, Russian President Vladimir Putin expressed his condolences to Churkin's family and the staff of Russia's Foreign Ministry. This is a huge loss. Against the backdrop of this loss, the behavior of our Ukrainian colleagues… is not at all as important compared to the loss that Russian diplomacy has suffered." 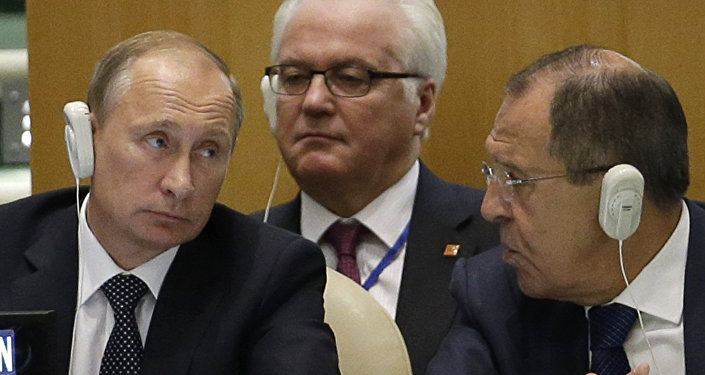 © AP Photo / Seth Wenig
Putin: Churkin's Achievements Can't Be Overestimated, He Was a True Patriot of Russia
Russian ambassador to the UN Vitaly Churkin passed away on Monday, February 20, in New York. Churkin had served as Russia's permanent representative to the UN and the Russian representative in the UN Security Council from April 2006. The diplomat would have turned 65 on Tuesday, February 21.

Along with diplomats from all over the world who expressed their condolences to Churkin's family, Russian President Vladimir Putin said that it is difficult to overestimate the achievements of late Russian Ambassador: "For more than 10 years, sometimes in extremely stressful circumstances, he firmly and consistently defended Russia's position on major international issues, which required tremendous effort and dedication."

Shaking Hands With Churkin Worth 'More Than Any Document' - Italian Ambassador