Putin: Churkin's Achievements Can't Be Overestimated, He Was True Patriot 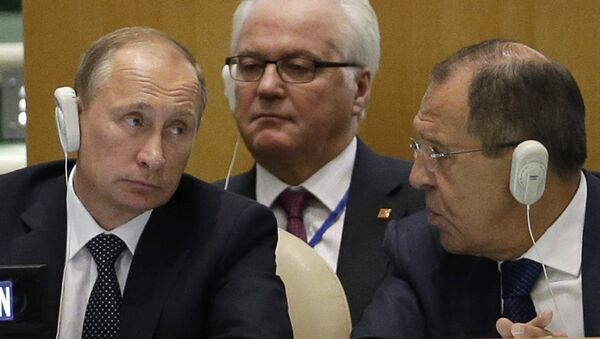 It is difficult to overestimate the achievements of late Russian Ambassador to the United Nations Vitaly Churkin, Russian President Vladimir Putin said in a message expressing condolences to Churkin's family published on the Kremlin website Tuesday.

MOSCOW (Sputnik) — Churkin passed away at his workplace in New York on Monday. He served as Russia's permanent representative to the UN and the Russian representative in the UN Security Council from April 2006. The diplomat would have turned 65 on Tuesday, February 21.

"The achievements of Vitaly Ivanovich cannot be overestimated… For more than 10 years, sometimes in extremely stressful circumstances, he firmly and consistently defended Russia's position on major international issues, which required tremendous effort and dedication. But no matter how difficult it was, he fulfilled the tasks at hand brilliantly and was never defeated," Putin said.

He highlighted Churkin's professionalism and noted that the envoy's sudden passing made "the pain of loss particularly acute." The president called Churkin a true patriot.

"Without exaggeration, [Churkin was] one of the most prominent diplomats. A professional of the highest level, a man of profound intellect and extraordinary energy, charisma and a rare sense of humor, he enjoyed the sincere respect of colleagues and a great reputation among foreign partners," Putin said.

Vitaly Ivanovich Churkin was born in Moscow in 1952. He graduated from the Moscow State Institute of International Relations in 1974, beginning his decades-long career at the Ministry of Foreign Affairs shortly.