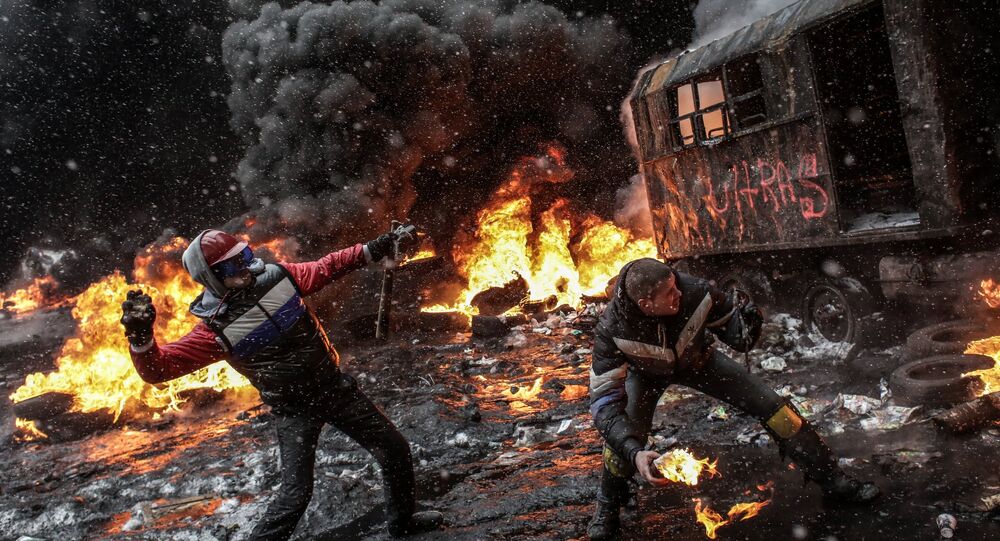 Academy Award-winning film director Oliver Stone says that US President Donald Trump should make public any secret documents he has in his possession on the origins of the conflict in Ukraine.

In an interview with Russia's Channel One which aired Sunday on the news and analysis program Sunday Vremya, Stone said that unfortunately, most Americans do not know the origins to the crisis in Ukraine.

"If I were President Trump, I would declassify all this information on Ukraine, as well as Syria, but above all Ukraine, because it's the focal point of where this [new] Cold War has come about," Stone said.

© REUTERS / Gleb Garanich
Kiev Forces Shell Donetsk as More Troops Head to Eastern Ukraine
The director noted that the US establishment has stuck to the same false narrative about Russia 'seizing' Crimea, about Russian involvement in the Ukrainian civil war, its posing a 'threat' to Ukraine, etc. There are important facts left unsaid about the origins of the Ukrainian crisis, Stone said, including the 'color revolutionary' techniques employed in the lead-up to the Maidan coup, who provided the funding, and who the mysterious snipers were that fired on police and protesters alike at the height of the crisis.

Stone characterized the current government in Kiev as unelected, extremely-right wing, heavily corrupted and controlled from abroad. Its very survival, he noted, depends on financial support from abroad. "I don't see any real democracy in Ukraine," he added, pointing to restrictions against the work of journalists, and the threats and attacks against anyone who speaks out against the government.

Asked about the CIA's involvement in the Ukraine crisis, the director explained that "Ukraine was one of the main objectives of the CIA" since the start of the Cold War, with the US providing covert aid to militia and dissident groups since the late 1940s.

Stone called the current resurgence of hostilities in eastern Ukraine "disgusting," saying that Kiev was obviously trying to get Trump to provide financial and other assistance. The mainstream US media, he noted, has been nearly unanimous in blaming Russia for the fighting.

© Sputnik / Dan Levy
Trump Vows Cooperation With Moscow, Kiev to Restore Peace on Ukrainian Border
A three time Academy Award winning director and screenwriter, Stone is well-known for making films about politically sensitive topics, and for his biographical portraits of Edward Snowden, President Richard Nixon, and President George W. Bush. In 1991, he directed JFK, an alternative account to the murder of the President challenging the official version.

In 2016, Stone co-produced the documentary 'Ukraine on Fire', a film which discussed the historical origins of the crisis in Ukraine, the lead-up to the Maidan coup, US and European involvement, and the danger the ongoing crisis poses to Europe and to the world. The film, a response to the 2015 pro-Maidan film 'Winter on Fire', featured an interview with former Ukrainian President Viktor Yanukovych, who was ousted by the coup, as well as Russian President Vladimir Putin.

This year, Stone plans to release a new documentary about Vladimir Putin. The director told Sunday Vremya that the film was just as important as his film about Ukraine.

The "military-industrial security state needs enemies," Stone said, "because that's where the money is," and Russia and its President have long been presented as one of America's main adversaries. Stone's film will attempt to set the record straight.