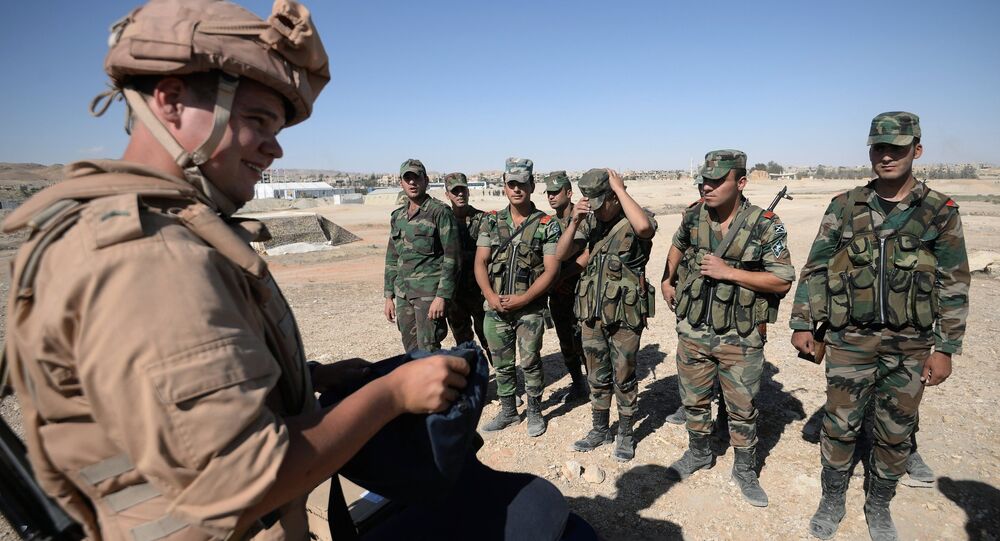 The only way for US President Donald Trump to liberate Raqqa, the de facto capital of Daesh (ISIS/ISIL), from terrorists, is to join forces with Russia and Damascus on the ground, Russian military expert Ivan Konovalov told Radio Sputnik.

In order to retake the Syrian city of Raqqa from Daesh (ISIS/ISIL), US President Donald Trump first needs to team up with Syria's government and Russia, Ivan Konovalov, a Russian military expert and Director of the Center for Strategic Trends Studies, believes.

"The Syrian army's main offensive is the only way [to accomplish this task]: the capture of Palmyra, the liberation of Deir ez-Zor and then the advance on Raqqa. And [for Trump] that means working with [Syrian President Bashar] al-Assad and with Russia," Konovalov told Radio Sputnik.

"They provided the information, but we found huge gaps in it. It was poor staff work," a senior White House official who reviewed the document told the media outlet.

The official specified that the Obama plan which envisaged arming and training Syrian Kurdish fighters lacked details about where exactly the training would take place and how many US soldiers would be required.

© AFP 2021 / DELIL SOULEIMAN
Members of the Kurdish People's Protection Units (YPG) monitor the positions of Islamic State (IS) group in the Syrian town of Ras al-Ain, close to the Turkish border on March 13, 2015

To complicate matters further, the proposed plan didn't include any provision for coordinating operations with Russia or a clear political strategy for easing tensions with Ankara over US-Kurdish cooperation, the official highlighted.

The Turkish government regards the Kurdish People's Protection Units (YPG) as an affiliate of the Kurdistan Workers' Party (PKK), which is designated as a terrorist organization in Turkey. Ankara has repeatedly criticized the Obama administration's policy of arming and training Syrian Kurdish militants.

While Trump's Syrian strategy has yet to be articulated, US observers have referred to the fact that the US President views the eradication of Daesh as a number one priority. Citing the President's election rhetoric, they assume that Trump may join the Russo-Syrian coalition to defeat the terrorist group.

"Previous US administrations would have been extremely concerned about Turkish tactical cooperation with Russia, but not, apparently, President Trump, who has mentioned joining up with Russia and the Assad regime to dispatch ISIS (hoping at the same time, somehow, to split Iran away from that tandem)," Aaron Stein of the American Interest noted Thursday.

Meanwhile, President Trump instructed Defense Secretary James Mattis and top Pentagon officials to work out yet another plan to take Raqqa within 30 days.

"President Donald Trump is a businessman and a man who is accustomed to thinking straight. He has obviously realized that Obama had no plan at all. That's ridiculous to rely [solely] upon the Kurds, however, they [the Obama administration] had done this in the last six months. At the same time, the US has serious contradictions with the Turks, their NATO allies [in the region]," Konovalov said, adding that this controversy has obviously undermined the efficiency of US military operations on the ground.

According to Konovalov, it is possible that Trump will decide to coordinate anti-Daesh efforts more closely with Russia and Syrian President Bashar al-Assad.

Perhaps, Trump understands that he can only succeed in taking Raqqa by teaming up with the Syrian Arab Army, which is backed by Russia, he assumed.

Konovalov also referred to Trump's plan of creating "safe zones" in Syria. If this plan is really designed to accelerate the resolution of the Syrian crisis, it may work, he noted.

Indeed, Russian Foreign Minister Sergei Lavrov has signaled recently that Russia does not consider Trump's proposal to build safe zones in Syria an attempt to repeat the "Libyan scenario."

"We understand that Donald Trump's administration has yet to specify its approach. The idea of safe zones was discussed in the beginning of the Syrian crisis. Then, they wanted to repeat 'the Libyan scenario,' announcing the creation of a safe zone, where the anti-government forces were located. I do not see that Washington attempts to follow the same path now," Lavrov said Wednesday at a press conference in Abu Dhabi.

For his part, Mohammed Kheir Jasim Nadir, a member of the Syrian parliament, emphasized that the plan should be coordinated with the Syrian government.

"Any proposal should be approved by and coordinated with the Syrian government as it is the first and final decision maker," Nadir told Sputnik.

"According to UNSC resolution 2254, the Syrian authorities are responsible for protecting their people. If Trump wants to succeed in any proposal, he must first knock on the right door, coordinating it directly with Damascus or via Moscow, which coordinates fully with Damascus. The Syrian government is the exclusive administrator for its people and its geography," he elaborated.

Konovalov noted that Turkey has tried to create a sort of safe zone in northern Syria. However, there is mutual distrust between Damascus and Ankara over the Turkish operation in northern Syria. Nevertheless, right now Syria, Turkey, Iran Russia are taking efforts to defeat Islamists and ensure the Syrian ceasefire.

Trump sees that Washington needs to change its Syrian strategy; it would be a step in the right direction if he decides to join forces with Moscow and Damascus on the ground.