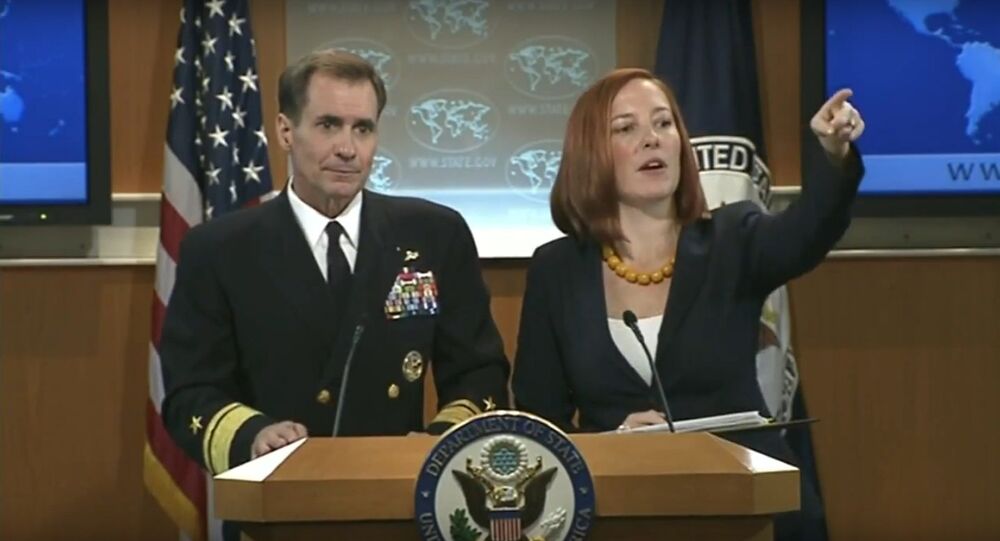 A few weeks from now, John Kirby will retire from his role as US State Department spokesman, joining the rest of the Obama administration as they make room for Trump and his team. Like his predecessor, Jen Psaki, Kirby has become famous for a series of gaffes and grillings by journalists during his press briefings. Here are a few of the best ones.

Kirby took the job of State Department spokesman in mid-2015, replacing Jen Psaki, who became an internet sensation at the height of the crisis in Ukraine for her tangled comments and lack of knowledge about world events or basic geography, like that landlocked Belarus does not have a coastline for the US 6th Fleet to deploy to, or that the EU sells natural gas to Russia, rather than the other way around.

Russian observers have found Kirby's tenure to have a darker tone. Holding a bachelor's degree in history and two masters degrees (in international security, and national security & strategic studies), Kirby has shown less of a tendency for cringe-worthy quotes. But that has not made some of his comments any less ridiculous.

In Russia, Kirby's most famous performance wasn't so much a gaffe as it was an unprovoked threat. In late September, telling the Syrian army to stop its offensive to liberate Aleppo, Kirby warned Russia that a continuation of the offensive would mean "attacks against Russian interests, perhaps even Russian cities." He added that if the war doesn't stop, Russia would "continue to send troops home in body bags," and "perhaps even [lose] aircraft."

© AP Photo / J. Scott Applewhite
State Department: Kerry 'Frustrated' With Outcome of US Policy in Syria
The comment sparked serious fears in Russia, and has since gone on to feed internet conspiracy theories about the US being secretly responsible for a number of tragedies that have befallen Russia since then, from the murder of the Russian ambassador to Turkey, to the recent loss of a Russian Tu-154 aircraft en route to Syria. Certainly if Kirby had phrased his response more carefully, such conspiracies would have been less likely to take root.

Kirby made his next 'memorable' comment in November, when he went ballistic on an RT reporter who asked him to provide basic details about allegations that Russian forces in Syria were deliberately engaged in bombing hospitals. Asked to provide specific evidence regarding such grave accusations, Kirby barked that he wasn’t "going to put Russia Today on the same level with the rest of you who are representing independent media outlets," and incoherently suggested that the RT journalist direct her questions to the Russian Defense Ministry.

"You work for Russia Today, right? Isn't that your agency? So why shouldn't you ask your government the same kinds of questions that you're standing here asking me? Ask them to tell you what they're [doing] or to deny what they're doing," the spokesman grumbled.

© Sputnik / Natalia Seliverstova
How Russian Diplomats Were Expelled From Countries in 2007-2016
Kirby's angry rant earned him a reprimand from his superiors. The State Department did eventually provide RT with a list of addresses of the allegedly bombed hospitals. However, none of them was actually in eastern Aleppo, and no sources on the ground in Syria put the blame for the alleged attacks on Russia.

In October, AP journalist Matt Lee put Kirby on the spot (something he has a habit of doing) following the spokesman's convoluted effort to explain the difference between the Syrian campaign in Aleppo and Saudi Arabia's brutal aggression in Yemen. Kirby's ridiculous answer? That Saudi Arabia has a right to defend themselves, and that Russia and Damascus were "deliberately" killing civilians, while Riyadh had the courtesy to launch internal investigations.

Lee similarly flustered Kirby last March over new details about the investigation into Flight MH17, which was downed in eastern Ukraine in 2014. Kirby offered an answer that Lee called out as completely meaningless.

Kirby pulled a similar stunt a couple months later over the US's support for Nusra Front ally Ahrar al-Sham. Admitting that the US had found some troubling evidence of the groups "comingling," Kirby simply suggested that that "our expectation is that they won't do that." Pressed on whether that would mean that the group would be listed as a terrorist organization by the US, the spokesman said that he didn't want to get into the specifics.

Finally, in perhaps one of his final knock-out blows for the Obama presidency, Lee flustered Kirby into a non-response about why the US is continuing to deploy missile defense in Europe even after the signing of the Iran nuclear deal. "If the missile defense system that you are putting in Europe is aimed at only Iran, why would you not want to make it not necessary?" Lee asked. Responding, Kirby said that he wasn't going to "relitigate the deal," adding that "we continue to believe in the power of missile defense on the continent, because Iran continues to pursue ballistic missile capabilities."

Ultimately, commenting on the twilight of the Obama-Kirby-Psaki era, Radio Sputnik contributor Vladimir Bychkov quipped that Kirby was "unlucky – unlucky because he took up the post of State Department spokesman after Psaki." Jen, he said, had a modest charm about her, and never built herself up as a know-it-all, unlike her successor.

What are your favorite Kirby and Psaki quotes?

How Russian Diplomats Were Expelled From Countries in 2007-2016

State Department: Kerry 'Frustrated' With Outcome of US Policy in Syria