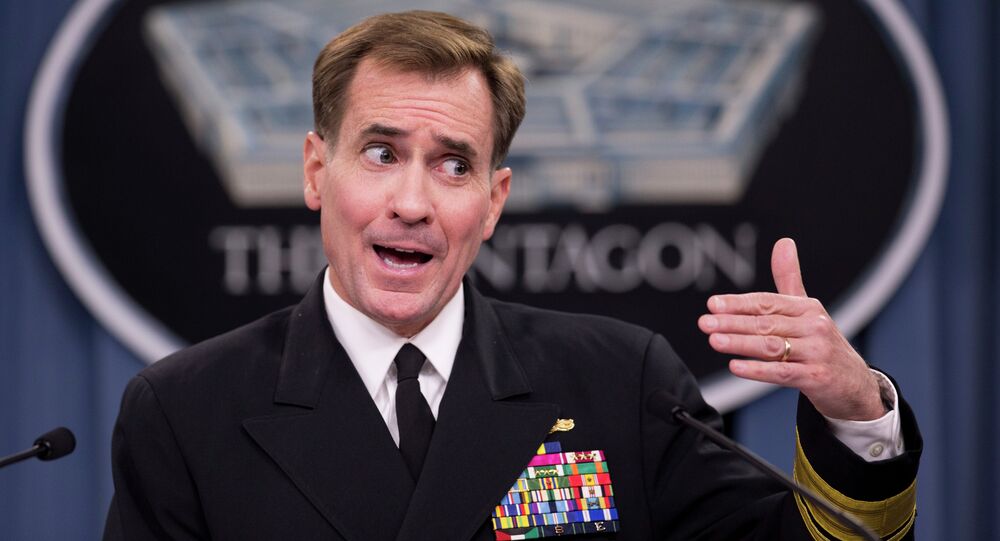 Washington looks to have shifted its approach to Russia to language of intimidation and threats. On Wednesday, US State Department Spokesman John Kirby said that if the Syrian army's offensive does not stop, Russian cities may be faced with the threat of terror attacks. Russian terrorism experts respond, commenting on the implicit threat.

© AP Photo / Chitose Suzuki
US 'Serious' About Suspending Bilateral Relations With Russia - State Dep't
The Syrian Army's successful offensive against the eastern, militant-controlled portion of the city of Aleppo is the reason for this new aggressive tone, according to Russian observers. On Wednesday, Russian Foreign Minister Sergei Lavrov revealed that his counterpart, John Kerry, had threatened to halt cooperation with Russia unless the Syrian military's offensive, backed by Russian air power, was stopped.

Svobodnaya Pressa columnist Andrei Polunin suggested that Washington's concerns are entirely understandable, even if their rhetoric is unacceptable. "If Bashar Assad's army manages to capture Aleppo, Syria's second city, it will mean a turning point in the war, resulting in Damascus regaining control over the country's strategic centers. This, in turn, will be a huge blow to the opposition forces supported by Washington."

Naturally, this scenario does not suit the White House, Polunin added. In addition to Secretary of State Kerry's warning, White House Spokesman Josh Earnest threatened "additional sanctions" against Russia in the event that hostilities are not stopped.

On Thursday, Reuters reported, citing anonymous officials, that the US response might include allowing Gulf States to supply the rebels with more sophisticated weapons, or even a deliberate US Air Force attack on a Syrian air base.

In this situation, Polunin suggested that Kirby's threats "appear to be a kind of final warning. The question then arises: What is behind his words? Let's begin with the fact that a limited Russian continent has been fighting in Syria for over year, and terrorist attacks inside Russia have yet to occur. Why would they start now? Is Washington threatening to give the go-ahead for the groups it controls in Syria to hit Russian territory?"

© REUTERS / Ammar Abdullah
US 'Invested Too Much Into Syrian Opposition to be Able to Backtrack'
Russian Foreign Ministry Spokeswoman Maria Zakharova couldn't help but get the sense that this may very well be the case. In a Facebook post on Wednesday, she noted that all this "ventriloquism about 'body bags', 'terrorist attacks in Russian cities' and 'loss of aircraft' sounds more like a 'get 'em' command, rather than a diplomatic comment."

Speaking to Svobodnaya Pressa, Alexei Filatov, a retired FSB Lieut. Col. and vice president of the International Association of Veterans of the Alpha Anti-Terror Unit, suggested that first and foremost, it's necessary to understand that "terrorism has long been a business." Accordingly, "terror attacks and the threat of terror attacks have been used to deal with many serious economic and political issues."

This reality of global geopolitics began to emerge with the Mujahedeen in Afghanistan, which eventually mutated into the Taliban, "not without the participation of foreign 'investors', including the United States," and also includes terror groups al-Qaeda and Daesh, the analyst explained. "I believe that even Daesh was a direct consequence of policy pursued by NATO countries, led by Washington."

In the current situation, Filatov suggested that any Russian action in Syria will necessarily result in a reaction. "Only a blind man cannot not see the connection between the beginning of our campaign in Syria and the destruction of the Russian Airbus A321 over the Sinai Peninsula. I think, unfortunately, that these are related events. The explosion onboard the aircraft was [Daesh's] response to our active participation in the Syrian conflict. Moreover, I think that the more serious our participation, the higher the probability that various attacks against Russian citizens will be planned."

With regard to Kirby's remarks, the FSB officer suggested that "they sound like a direct threat. I have good reason to suppose that some terrorist acts planned by Daesh or the remnants of the Caucasus Emirate can take place with a certain level of participation by US agencies responsible for fighting terrorism."

"In the best case, these US structures will not react to signals about imminent terror attacks on Russia; at worst they may even fund such activities. Again, I cannot exclude the possibility our foreign colleagues becoming involved in the preparation of terrorist attacks on Russian territory."

© Sputnik / Dmitriy Vinogradov
Russian Military Intervention Saved Syria From Becoming a 'Daesh Caliphate'
Ultimately, Filatov emphasized that Russia's security forces have had over 20 years of experience fighting terror. "Our experience in this area is huge. Russia today practically does not face the threat of complex, large-scale terrorist attacks. This speaks to the fact that our security services have learned how to deal with terrorism effectively. On the other hand, unfortunately, no security service can guarantee 100% protection against terror, especially in a situation where the risk of terror attacks is increased for political reasons."

For his part, Stanislav Tarasov, director of the Middle East – Caucasus Research Center, suggested that Kirby's words were extremely undiplomatic, to say the least, especially considering that Moscow still maintains a level of anti-terror cooperation with the United States.

"It's worth recalling that Americans have been victims of acts of terror for which radical Islamists were responsible. But instead of cooperating with Moscow, including on the Syrian track, Washington arranges such provocations," the analyst complained.

Ultimately, Tarasov suggested that Kirby's statement seemed a kind of "a sign of the death throes of American policy in the region, and of US foreign policy in general."

In any case, the analyst suggested that if Washington's plans involve shifting militants from Syria to Russia, the recently reestablished cooperation between Ankara and Moscow, including anti-terrorist cooperation, should undermine such plans. "It's necessary to understand that today, Moscow and Ankara are not interested in each other's destabilization. Besides, relations between Turkey and the US today are not so trouble-free as they were before," Tarasov noted.

US 'Serious' About Suspending Bilateral Relations With Russia - State Dep't

US Comments on Daesh Threat in Russia 'Emotional Breakdown'