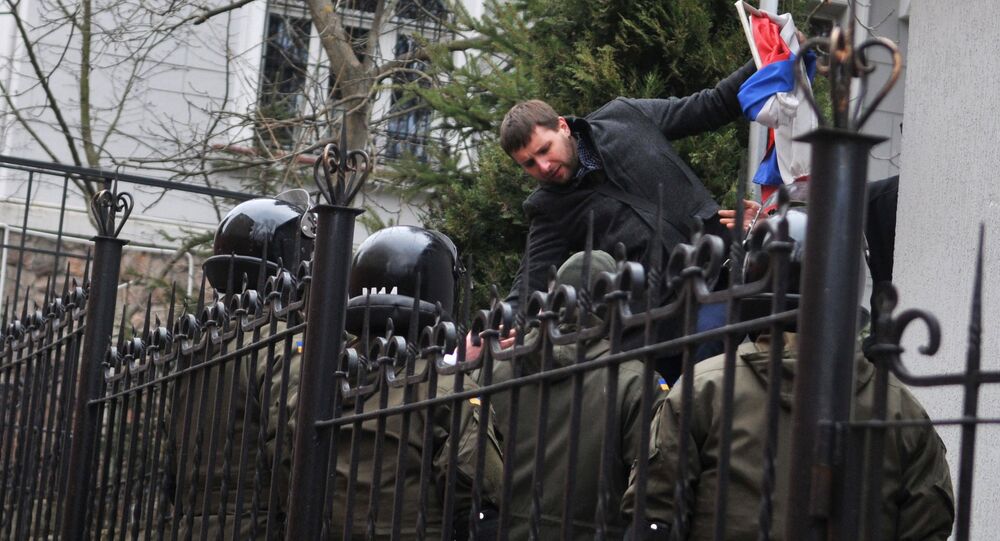 How Low Can You Go? Ukrainian MP Calls Russian Ambassador's Murderer a 'Hero'

On Monday, Russian Ambassador to Turkey Andrey Karlov was killed by a terrorist gunman in Ankara. The ambassador's murder has met with condemnation from politicians worldwide. But in Kiev, some lawmakers are actually celebrating the killing. Among them is Volodymyr Parasiuk, who called the ambassador's murderer a 'hero'.

On December 19, the Russian ambassador was murdered by a terrorist gunman at the opening of an art gallery exhibition in Ankara; he was reportedly shot in the back nine times. Three others were injured in the attack, and the gunman, 22-year-old Mevlut Mert Altintas, was killed by Turkish security forces shortly thereafter.

© Sputnik / Natalia Seliverstova
Moscow 'Highly Appreciates' Solidarity in Wake of Ambassador Karlov's Assassination
Karlov's murder was met with shock and condemnation from around the world, with leaders and diplomats worldwide offering words of support to Moscow.  Even countries with which Russia has had difficult relations in the past have condemned the killing.

However, in every orchard there are a few bad apples, and for some, even Karlov's reprehensible murder seemed to be no exception.

Volodymyr Parasyuk, a Ukrainian nationalist lawmaker, who was suspected of committing war crimes in Kiev's war in the Donbass before being elected to the country's parliament in 2014, decided to try and make a name for himself by praising the murder and calling Karlov's killer a 'hero'.

In a post on his Facebook page, Parasyuk posted a photo of Altintas from immediately after Karlov's murder, along with the phrase "when a man is ready, at the cost of his own life, to take extreme measures for the sake of an idea, for the sake of truth, then it can be said with confidence that he is a hero."

© Sputnik / Maksim Blinov
Turkish Foreign Minister Postpones Ukraine Visit After Russian Ambassador Murder
Getting into a heated argument with some of his readers, Parasyuk kept insisting that Karlov's killer was "a hero to his people." Users countered, pointing out that Turkish social media is now filled with anything but flattering words toward Altintas.

Users also slammed Parasyuk for his stupidity, pointing out that every other European government has condemned the terrorist act. Some called the Ukrainian lawmaker's remarks a manifestation of extremism in its own right.

Amazingly, even users who sympathize with Parasyuk and his radical ideas told him that "killing an unarmed ambassador is not an act of heroism, but a terrorist attack." Others also pointed to the killer's alleged sympathies for the jihadists in Syria, and asked whether Parasyuk thought that maybe "the guys who crashed into the World Trade Center on September 11, 2001 were also heroes" in the lawmaker's eyes.

© AP Photo / Burhan Ozbilici
Saudi Arabia Denounces Murder of Russian Ambassador Karlov in Turkey
Others simply pointed out that as a politician serving in the country's parliament, Parasyuk should engage in trying to solve Ukraine's many social, political, and economic problems, instead of trying to whip up scandal.

Some Ukrainian media sources, which had at first eagerly jumped to report on Parasyuk's remarks, soon began deleting their articles, apparently understanding that the matter was embarrassing to the country's image, and deciding it was unworthy of coverage.