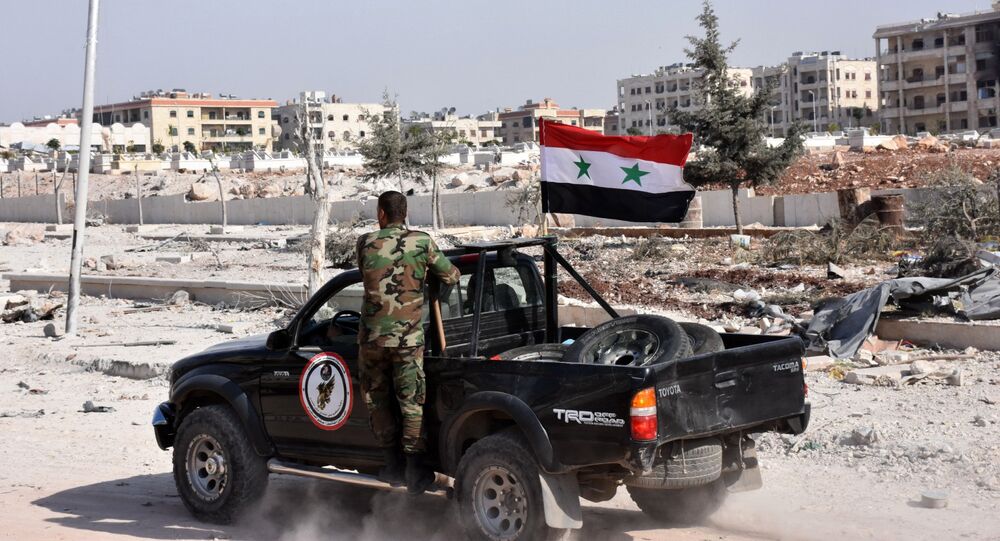 US Secretary of State John Kerry is putting efforts to strike a deal with Russia on resolving the situation in Syria's Aleppo before President-elect Donald Trump is inaugurated in January, media reported, citing officials.

Russian aide to the President Yury Ushakov described Kerry's efforts as "very active" and even "inconceivable" since "there have never been so many telephone contacts where only one topic was discussed – Syria."

America's top diplomat is apparently trying to bring more stakeholders to the table, including Saudi Arabia, Qatar, Turkey and Iran, while focusing solely on Aleppo, a city which was Syria's commercial capital prior to the war, the Washington Post asserted.

In exchange, the US apparently wants Syria and its allies to lift the siege of eastern Aleppo, the rebel-held area of the city, and allow humanitarian aid in. Washington appears to remain oblivious to the fact that Damascus and Moscow have repeatedly opened humanitarian corridors into eastern Aleppo. These initiatives have been complicated by radical groups active in the area.

The newspaper described Kerry's efforts as a "quiet mission."

© AFP 2021 / GEORGE OURFALIAN
Syrian pro-government fighters fire a Russian 122mm howitzer gun as they advance in the recently recaptured village of Joubah during an offensive towards the area of Al-Bab in Aleppo province, on November 25, 2016
© Sputnik / Mikhail Voskresenskiy
Rebels Clashing in Aleppo as Radicals Prevent Other Militants From Fleeing - Russian MoD
Colonel-General Leonid Ivashov, the President of the Academy of Geopolitical Studies, said Kerry was the reason why Aleppo has not been liberated yet.

"I think that the interference of US Secretary of State John Kerry has halted the liberation of the Syrian city," he said. "When the plan of the multidimensional operation was laid out, he called with a request to postpone it."

Earlier in November, Lavrov mentioned that both countries are still trying to reach an agreement on Syria. He added that experts from the Middle Eastern countries which are involved in the Syrian conflict are also taking part in these efforts.

Russia's top diplomat also pointed to the largest stumbling block on the path to a new deal.

"These contacts have produced certain results, but they are also hindered by the same problem which prevented the Americans from keeping their promise to separate the so-called moderate opposition from [al-Nusra Front]. There is growing evidence and firm impression that they want to preserve al-Nusra as the most effective force in opposition to President Bashar al-Assad," he said.

Lavrov and Kerry discussed "ways of resolving the conflict in Syria," including Aleppo, during a telephone conversation on November 22.

Orient News
Syrian Jihadists Flaunt Portable Anti-Aircraft Missiles, Claiming They’ve Got Lots More (VIDEO)
The Obama administration has placed principal blame for what is happening in Syria on Assad, claiming that his removal is the necessary step to resolve the five-and-a-half-year-long war. Critics have pointed out that overthrowing Assad will only empower foreign-sponsored terrorist groups which have largely absorbed less radical fighters.

It is unlikely that Moscow and Washington will reach an agreement while the Obama administration remains in office. For his part, US President-elect Donald Trump has indicated that he is willing to cooperate with Moscow. At the same time, he also voiced his concerns over Washington's strategy of supporting rebel groups in Syria.

"Moscow is indeed hopeful that the new administration in the White House will prioritize the fight against terrorism and extremism and that joint dealings on Syria may culminate in a real cooperation. The spectrum of possible US-Russia interactions discussed in the Russian expert community varies from intelligence sharing between the respective agencies to coordinated joint military airstrikes to even a joint offensive on Raqqa sometime next year," Maxim A. Suchkov, an expert of the Russian International Affairs Council, wrote for al-Monitor.