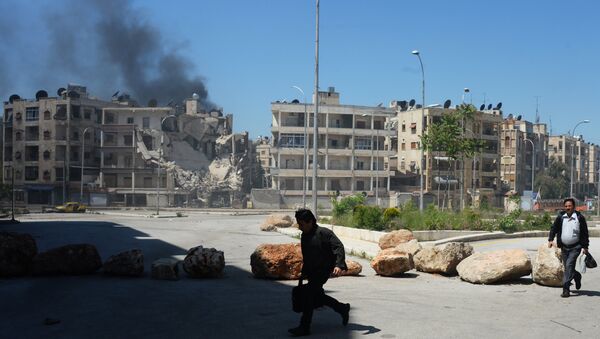 Fighting between rebel groups in the Syrian city of Aleppo has escalated because radicals are trying to prevent other militants from leaving the embattled city, the Russian Defense Ministry's center for Syrian reconciliation said Sunday.

"Clashes between militant groups have intensified because some militants, who are controlling Eastern Aleppo, wanted to leave the city but were encountered by the most hardline groups," the center's statement said.

"Eastern Aleppo sees a growing number of locals who are disaffected with militants' actions. Grassroots revolts against terrorists' atrocities are taking place with increasing frequency," it read adding that the residents of three districts including Haidaria and Hanano, controlled by militants for at least four years, have squeezed them out.

Aleppo's regions liberated from terrorists are returning to peaceful life, with the formation of local authorities underway, the center for Syrian reconciliation said.

"The Russian center for reconciliation of warring parties has arranged the delivery of humanitarian aid to Aleppo's regions liberated from terrorists. The neighborhoods are returning to peaceful life, local authorities are being formed, security and order are ensured," the statement said.

It added that the Syrian government forces have significantly advanced toward eastern parts of the Aleppo city over the past two days. Five neighborhoods and over 2,000 buildings have been freed from al-Nusra Front (banned in Russia) terrorists and affiliated rebel groups.

"Only in last 24 hours 903 civilians, including 119 children have left the militant-held area Jabal-Bidaru. Eight militants have ended resistance and left the eastern part of the city using the corridors provided by the Russian center for reconciliation and by the Syrian authorities," the statement also said.

Why Syrian Aleppo Will Not be Liberated Within Next Three Months
Over the recent months, Aleppo has been a major battleground in Syria, engaging government forces, jihadists, and numerous opposition groups. Eastern Aleppo is held by militants, encircled by government forces, and the fighting has affected thousands of civilians still trapped in the city.