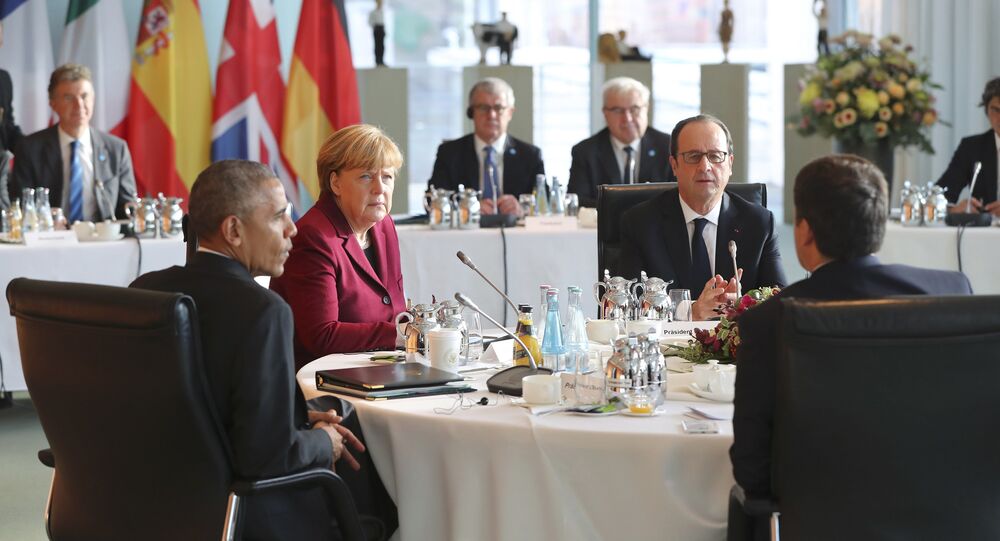 On Friday, US President Barack Obama finished his farewell visit to Berlin as head of state. Despite the fact that the topic "Obama in Berlin" has been the main issue discussed by the German press, the parties didn't make any substantial statement during their meeting, RIA Novosti observer Tatyana Firsova wrote.

© AFP 2019 / Brendan SMIALOWSKI
Obama, Merkel Discuss Ukraine Conflict, Europe’s Migration Crisis
On the day of Obama's arrival in Germany, German WirtschaftsWoche newspaper published parts of the text from an exclusive joint article written by German Chancellor Angela Merkel and US President Barack Obama. In the publication, both leaders stressed the need to "expand and deepen bilateral cooperation" between the two countries.

US President Barack Obama arrived in Berlin on Wednesday to meet German Chancellor Angela Merkel. On Thursday, the two held a meeting, where they discussed the crisis in Ukraine, climate change and the proposed US-EU Transatlantic Trade and Investment Partnership (TTIP) which Trump had vowed to scrap.

"Journalists noted from the outset that Obama's farewell visit to Berlin after Donald Trump's victory in the presidential election was supposed to mainly have a psychotherapeutic component. The current president was expected to calm down his European colleagues, who do not know what to expect from the new US administration," Firsova wrote.

© AFP 2019 / Ronny Hartmann
Obama, Merkel Urge Both Sides of Ukraine Conflict to Abide by Ceasefire
In particular, the two discussed their joint fight against terrorism, pledged to further respect human rights and help refugees. They also once again confirmed their commitment to the Paris climate agreement which has become a subject to heated debate.

On November 8, Republican candidate Donald Trump won the US presidential election with 290 electoral votes, while his opponent Hillary Clinton received 228. Many Western politicians repeatedly expressed their concerns over Trump's victory, fearing what they call his "unpredictability".

The Syrian conflict and Russia's position on Syria were also among the main topics discussed during the meeting. In particular, Obama stressed that the West is interested in cooperation with Russia, and therefore should maintain dialogue with Moscow.

"My principal approach to Russia has been constant since I first came into office. Russia is an important country. It is a military superpower. It has influence in the region and it has influence around the world. And in order for us to solve many big problems around the world, it is in our interest to work with Russia and obtain their cooperation," Obama said.

Relations between the US and Russia have recently deteriorated amid the situation in Aleppo. The US has repeatedly attempted to downplay the significance of Russia-backed Syrian Army's operation in Aleppo while at the same time glorifying the US coalition's operation in Mosul, Iraq.