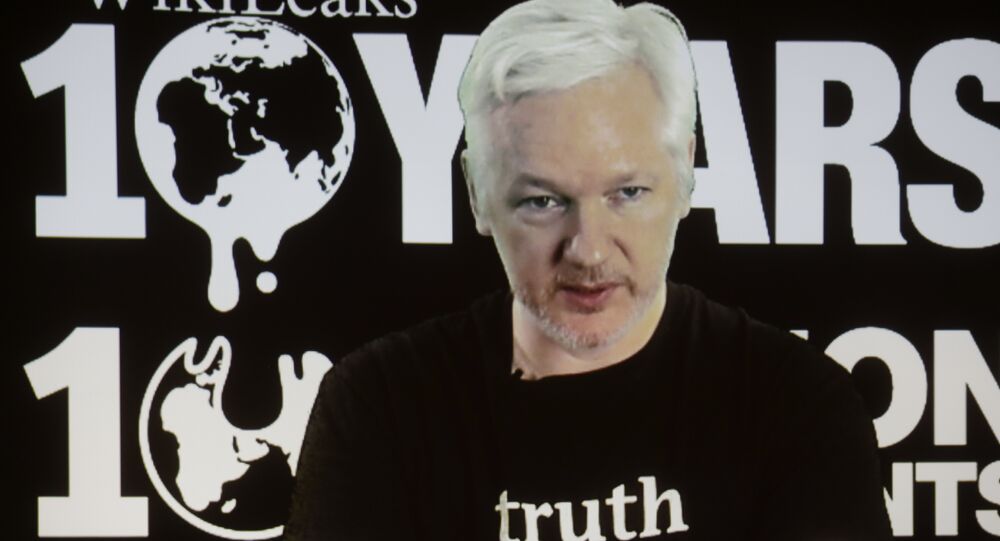 In a special interview with John Pilger aired by RT, WikiLeaks founder Julian Assange dismissed the allegations of Hillary Clinton’s camp that Russia was responsible for the revelations made by the whistleblowing website, which recently published a bunch of emails discrediting Clinton’s campaign.

MOSCOW (Sputnik) – The WikiLeaks website has recently published over 43,000 emails from the hacked account of US Democratic presidential nominee Hillary Clinton’s campaign chairman, John Podesta. The website promised to publish a total of 50,000 before the US elections take place.

"The Clinton camp has been able to project that kind of neo-McCarthyist hysteria that Russia is responsible for everything. Hillary Clinton stated multiple times, falsely, that 17 US intelligence agencies had assessed that Russia was the source of publications. That’s false. We can say that the Russian government is not the source," Assange said.

© REUTERS / Brian Snyder
EXCLUSIVE: Source of DNC, Podesta Leaks 'Comes From Within Washington'
In March, WikiLeaks created a searchable archive for emails sent to and from Clinton’s private email server, while she served as US secretary of state from 2009 to 2013. Clinton has come under significant criticism for using a private server and email address for official business during her tenure as the head of US diplomacy.

My former editor and I won the office Halloween contest by dressing as Hillary's worst nightmare: Assange and @wikileaks' #podestaemails pic.twitter.com/IvwXRwZaoF

Speaking during the final presidential debate in October, Clinton accused the Russian government of allegedly carrying out cyberattacks to influence the US elections. Moscow called such accusations absurd and ungrounded.

Russia takes human rights too seriously to be an eligible donor to the Clinton Foundation.

Assange Feels Sorry for Clinton Being 'Eaten Alive' by Ambitions

Julian Assange feels sorry for Hillary Clinton, as she had fainted and got sick due to her ambitions, Assange said.

"I actually feel quite sorry for Hillary Clinton as a person, because I see someone who is eaten alive by their ambitions, tormented literally to the point where they become sick – for example faint – as a result of going on, and going with their ambitions. But she represents a whole network of people, and a whole network of relationships with particular states," Assange said.

In September, Clinton suffered what appeared to be a fainting fit and had to be carried by Secret Service officers while attending a memorial gathering for the 15th anniversary of the September 11, 2001 terrorist attacks on the United States. Other symptoms that caused concern over Clinton’s health among her supporters during the presidential election campaign included severe coughing attacks and blood clots.

© Sputnik
EXCLUSIVE: 'WikiLeaks Did Not Publish Any Emails From Russia'
Clinton’s physician, Dr. Lisa Bardack, has repeatedly said that the presidential candidate is in good health.

The US presidential elections are scheduled for November 8, with Republican candidate Donald Trump being Clinton’s main opponent in the presidential race.

Pilger’s interview with Julian Assange was possible due to the courtesy of Dartmouth Films.