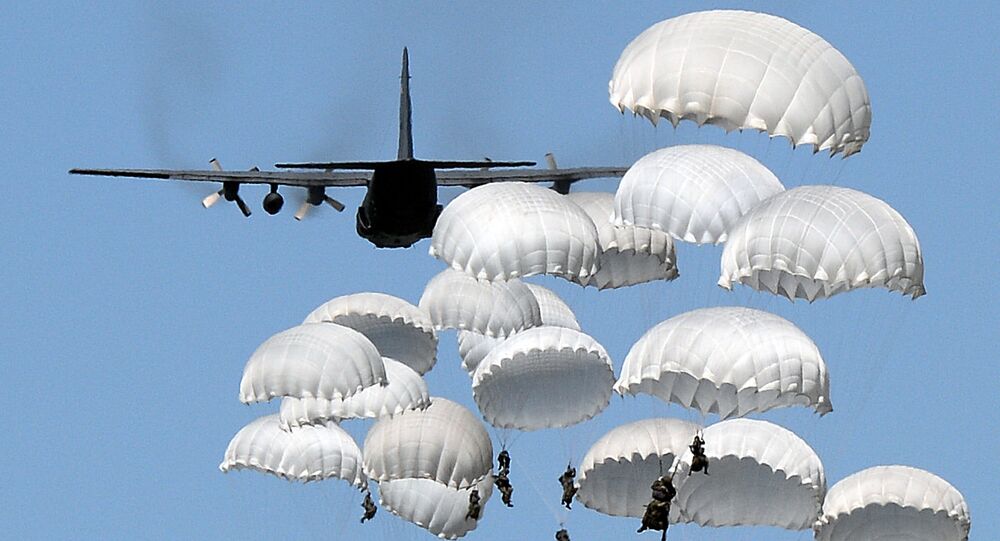 NATO has been increasingly assertive in Eastern Europe, the Baltics and the Black Sea region, although Russia has done nothing to warrant these activities. This should not come as a surprise since "saber-rattling when there is no need" has always been one of the bloc's "key characteristics", Canadian journalist John Bosnitch told Radio Sputnik.

Bosnitch, a former war reporter in Bosnia, Krajina, Kosovo and Serbia, was commenting on NATO's decision to send four battle groups close to Russia's borders and the alliance's belligerent rhetoric with regard to Moscow.

"There has been no provocation on the part of Russia whatsoever. And I don't know whether this is because NATO is trying to help Hillary Clinton win the election in the United States or whether they are trying to get more money from the US Congress, the Canadian Parliament or from other governments, but this action makes no sense," he said.

© AP Photo / Alik Keplicz
NATO 'Posing a Threat to the Whole World Like Hitler's Germany'
Critics have noted that the warmongering rhetoric coming from NATO command over so-called Russian threat coincides with lobbying for more military spending in member countries. This strategy is apparently working. Earlier this year, the Pentagon requested a massive increase in military spending for its operations in Europe – from $789 in 2016 to $3.4 billion for the next year. In addition, US defense officials have made a major push to convince their European partners to reach the goal of allocating 2 percent of GDP on defense.

Bosnitch reiterated that Russia does not pose a threat to the West.

"The troops that [NATO officials] are talking about sending are actually just a show of force," he said. "The known Russian military defenses are there, but there is no Russian buildup that is being countered. There is no Russian threat that is being countered. In fact the only threat that has recently appeared on this borderline is the new Western missile defense system, which is not a missile defense system, but a first strike system.

The Canadian journalist was referring to the Aegis Ashore base in Deveselu, Romania. This is a land-based component of the US-built and NATO-operated missile defense shield in Europe. The US and NATO have said that this system is meant to ostensibly protect European nations from a missile threat from Iran, but Russian officials and experts have questioned the true aim of these facilities.

Russia and President Vladimir Putin have become a major topic in the presidential election campaign in the US.

© AFP 2021 / JANEK SKARZYNSKI
NATO Buildup in Eastern Europe: 'We've Only Seen the Tip of the Iceberg'
"Hillary Clinton's campaign is a fear mongering campaign based on attempting to make US real estate billionaire Donald Trump into an agent of President Putin or Russia. Nothing more ridiculous has been attempted in the US elections in decades. And the fact is that to make people believe that there is such a threat, which there is not, [NATO] is being sent floating around the world, with fleets and airplanes repositioned, as well as tens of thousands of troops put on high alert, just to make it look like there is a threat," he explained.

Bosnitch added that the US government is apparently biased with regard to the upcoming presidential election. Washington is "extremely worried" that Hillary Clinton, whom the journalist referred to as "the military-industrial complex's candidate," might lose.

"If that were to happen, the entire military-industrial complex in the US could be set in reverse. In other words, tearing down the war-machine and so on. We are not talking about billions of dollars here, we are talking about trillions of dollars. And that means that they will use every tactic necessary to promote their candidate and this is just one of those tactics. The media blockade against Mr. Trump is the other," he said.

NATO Has Devolved Into 'Attack Alliance', Contradicting the UN Charter