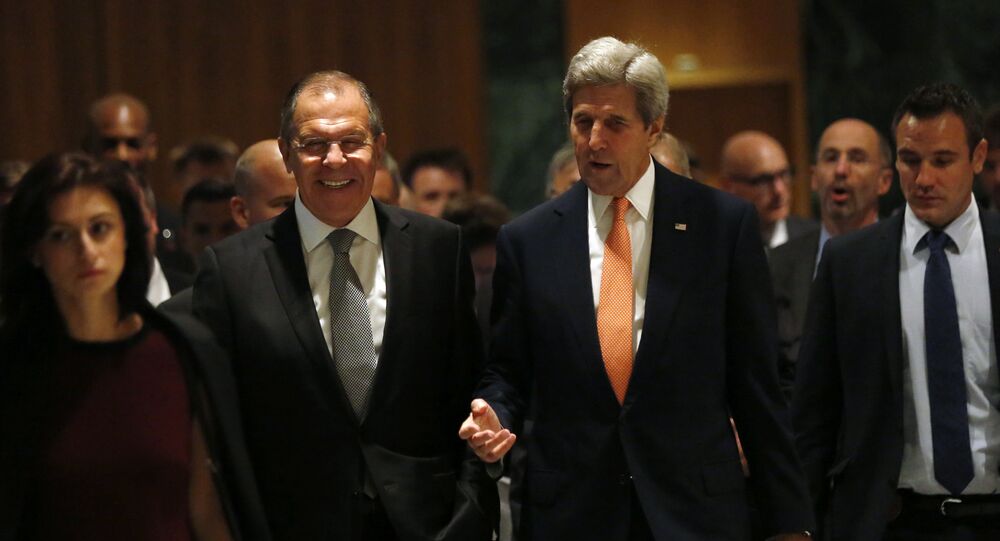 This is Who Benefits From Russia-US Agreement on Syria

Russian and American diplomats would not have reached the deal on reducing the violence in Syria if Washington was able to achieve its goals in the country, primarily change the regime in Damascus, and if the Syrian Arab Army was not embattled by more than five years of fighting, political analyst Dmitry Kosyrev wrote for RIA Novosti.

Kosyrev said that if the Syrian Arab Army was "in a good shape," there would have been no ground for talks."It is also clear that the United States would not have agreed to this painful deal if there was a chance for Washington to 'win,' in other words to change the regime in Damascus or remain an influential power in the region. The agreement makes the latter possible," he said.

© AFP 2020 / DELIL SOULEIMAN
Breakthrough Deal: This is What Russia and US Agreed to Do in Syria
Kosyrev warned that those in the US unhappy with the deal will most likely try to undermine it. The analyst also said that Washington will try to spin the agreement as a major success during the presidential election campaign.

Russian Foreign Minister Sergei Lavrov and US Secretary of State John Kerry announced the breakthrough agreement during a press briefing on September 9. This is not "a comprehensive deal that would put an end to the war in Syria, but a ceasefire agreement" and it will be hard "to implement what has been agreed upon," the analyst explained.

"It's hard not to notice that the agreement primarily focuses on preventing Syria and its partners, including Russia, Iran, etc., from launching strikes against pro-American armed opposition groups. Theoretically, these militias must now stop fighting and focus on negotiating with Damascus," he said. "Bad people from Daesh will remain where they are to be destroyed perhaps in a joint operation involving the US, Russia and the Syrian authorities."

© REUTERS / Abdalrhman Ismail
India may bring out an initiative of establishing a fund to restore the post-war Syria at the upcoming BRICS summit, a government source said Friday.
© AFP 2020 / KREMLIN POOL / PRESIDENTIAL PRESS SERVICE
'Failed Foreign Policy Leader': Moscow Helps Obama Save Face, Again
It was not long ago that this scenario seemed impossible to have been achieved since separating moderate rebels from radicals is a challenge. The physical separation of these groups still remains a major challenge despite the fact that all major stakeholders have promised to adhere to the deal.

Lavrov called this task "a key priority". Both diplomats warned that the agreement is fragile due to the number of players involved in the devastating Syrian conflict which has claimed more than 280,000 lives and displaced millions of people.

Kosyrev noted that should radical groups try to capitalize on the upcoming secession of hostilities, the deal will crumble. In fact, he maintained that this is what will most likely happen.

"This will happen because someone on the ground will refuse to adhere to the agreement. There are so many militias embroiled in the Syrian conflict who answer to different commanders that this is a likely scenario," he noted.

© REUTERS / Kevin Lamarque
U.S. Secretary of State John Kerry and Russian Foreign Minister Sergei Lavrov shake hands at the conclusion of their press conference following their meeting in Geneva, Switzerland where they discussed the crisis in Syria September 9, 2016

© AP Photo / Hassan Ammar
Damascus Approves Russia-US Agreement on Syria
The first step involves securing a nationwide ceasefire that no one, including Damascus-led forces and armed opposition groups, is allowed to violate. If all stakeholders adhere to the ceasefire for at least seven days, Russia and the United States will move to the second stage.

The second step involves both sides establishing a Joint Implementation Center and, according to Kerry, "working together to develop military strikes" against al-Nusra Front, al-Qaeda's offshoot in Syria that has recently claimed to have severed ties with the terrorist organization, and Daesh, the brutal group that still controls large areas in Iraq and Syria.

Kosyrev maintained that the United States was more interested in the talks on the deal. "If the US wasn't interested, it would not have been ready to reach a compromise," he said, adding that Washington will try to "walk back on the agreement" since this is what "it has always done."