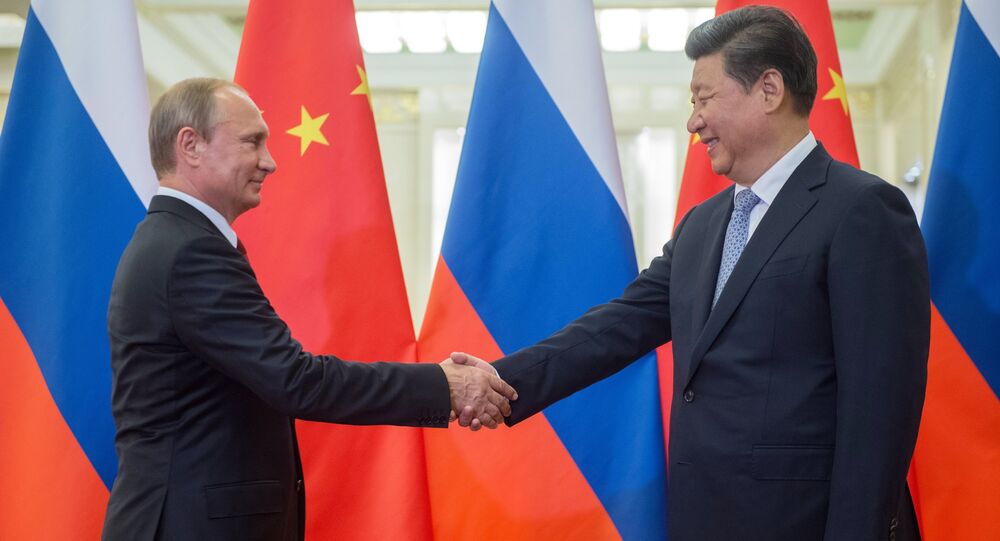 Chinese President Xi Jinping has urged Russia to strengthen bilateral comprehensive cooperation and mutual political support during a meeting with President Vladimir Putin at the G20 Summit in Hangzhou, prompting political analyst Rostislav Ishchenko to assert that both countries are moving towards a political and military alliance.

"De facto a political and military alliance between Russia and China has existed for a long time and it is not a secret to anyone," Ishchenko, head of the Center for Systems Analysis and Forecasting, wrote for RIA Novosti. "Rumors have repeatedly surfaced that it could be formalized. But at the recent G20 summit the Chinese leader has for the first time mentioned the need to 'formalize relations' as openly as Chinese political and diplomatic traditions permit."

© REUTERS / Rolex dela Pena/Pool
G20 Summit’s Biggest Outcome: 'Triumphant Return of Presidents Putin, Erdogan'
On Sunday, Xi Jinping said that both countries should support each other in their efforts to protect national sovereignty and security. The Chinese president added that both nations should step up cooperation in such areas as infrastructure development, energy, aviation, aerospace and cutting-edge technology. In addition, Russia and China should foster bilateral military exchanges and security cooperation.

Ishchenko suggested that Xi's comments point to Beijing's wish to "formalize the already existing relations and mutual obligations." The analyst further said that both countries could even sign an agreement "simply because both sides are interested in one."

The analyst maintained that China's overtures of friendship should be viewed in a larger geostrategic context. On the one hand, the United States is losing its international clout. These changes, he said, are already taking place. Moreover, "they must be evident to Southeast Asian nations, since they do not care about Washington's failures in Syria as long as the US is capable to do anything it wishes in the Asia Pacific," he explained.
Washington's tensions with Beijing over the South China Sea are also a factor.

© East News / Xinhua/Imago Sport and News
Russian Experts Explain Why Chinese Air Power Will Soon Match Russian, US Capabilities
The increasingly warm relations between Russia and Japan have also contributed to Beijing's recent stance. Moscow and Tokyo have been locked in a decades-long territorial dispute, but both nations appear to be genuinely willing to search for a common ground and ink a peace deal that would also find a mutually-acceptable formula to resolve the issue over the islands known as the Kurils in Russia and Northern Territories in Japan.

Russian President Vladimir Putin met with Japanese Prime Minister Shinzo Abe last week in Vladivostok. Although no breakthrough was reached, both sides were optimistic that a compromise could be reached.

"A rapprochement between Russia and Japan is a challenge not only for the US, but also China. Beijing and Tokyo have traditionally competed for the leading role in Southeast Asia," the analyst observed.

China has nothing to worry about as long as relations between Russia and Japan remain strained. This appears to be no longer the case.

"This is why Beijing wants to transform an informal bilateral political and military alliance that is meant to protect both countries from America's hegemonism to formal obligations that would guarantee mutual assistance not only against the US, but also its allies," the analyst suggested, adding that for China this is primarily Japan.

These geostrategic trends have prompted Ishchenko to say that the process of formalizing relations between Russia and China will be "complicated, but a treaty will eventually be signed."