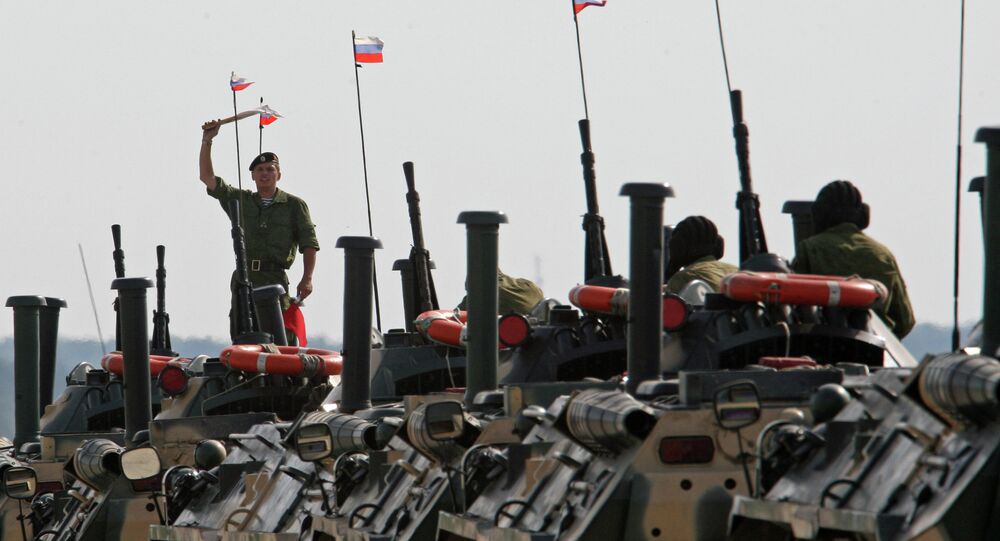 European NATO countries are talking about a 'Defense Schengen', which would allow them to quickly transfer troops and equipment from one country to another in the event of a military emergency. Commenting on the proposal, Russia's Vzglyad newspaper says that the idea could cure the Baltic countries of their paranoia about a 'Russian invasion'.

NATO countries' 'Defense Schengen' concept, meant to further integrate new members into the alliance and to improve logistics to ensure the seamless passage of the bloc's troops throughout Europe, was conceived as a response to members' envy of the Russian military's ability to quickly transfer troops and equipment around Russia's western borders.

On Wednesday, at a meeting in Warsaw, the Estonian and Polish defense ministers confirmed that the two countries are actively working to ensure that the troop and equipment transfers of their NATO allies could be simplified. "We are working to ensure that each individual soldier will not require a decision at the political level to cross the border," Estonian Defense Minister Hannes Hansen said.

© AP Photo / Alik Keplicz
Poland, Baltic States Silent on Russian Offer to Discuss Security - Moscow
In 2014, in response to the emerging crisis in relations between Russia and NATO over Ukraine, the alliance agreed on a buildup of military personnel and equipment in Eastern Europe. This included the creation of a so-called rapid reaction force at the NATO Summit in Newport, where it was agreed that around 4,000 troops could be transferred to quickly respond to any attack on a NATO member. According to the alliance, these troops can be transferred and deployed in Poland or the Baltic countries in under 48 hours.

However, NATO's commanders have complained that these forces can be activated only in the event of an actual attack. Accordingly, officials have said that the bloc needs a 'Defense Schengen' to be able to quickly organize exercises.

In May, Lt. Gen. Ben Hodges, commanding general of United States Army Europe, complained that coordination for troop transfers between countries is a bureaucratic process that takes weeks. Accordingly, he grumbled, NATO's is not in a position to stage drills involving troops' sudden transfrer from one country to another without prior political approval by each individual member state.

At the same time, Hodges warned, Russia does not have that problem. "The Russians are able to move huge formations and lots of equipment a long distance very fast," he told the BBC in June. NATO, he added, should have such capabilities. "Three days' notification, we ought to be able to do that."

Of course, the commander didn't mention that the reason Russia does not face bureaucratic hassles in moving its troops is because it's moving them within its own borders, while NATO has become a bureaucratic monstrosity, which Russian Foreign Minister Sergei Lavrov recently suggested is matched only by the European Union.

© Sputnik / Igor Zarembo
Over 4,000 Russian Coastal Troops Involved in Snap Inspection
In any case, the Baltic countries appear to be moving ahead with the 'Defense Schengen' concept. In June, Lithuanian President Dalia Grybauskaite suggested that the initiative would help to ensure European security (i.e. Lithuania's security), adding that Vilnius would support it.

Commenting on these sentiments, the Russian newspaper Vzglyad recalled that "it is well-known that fear of the 'threat from the East' has taken on a character of mass psychosis among the Baltic countries, especially Lithuania and Latvia." Grybauskaite herself, the paper added, "regularly frightens Lithuanians with suggestions that the Baltics face an imminent threat and must prepare to repel a Russian attack 'for at least three days' until assistance from NATO allies arrives."

"I think all sober-minded people who really are involved in politics understand that the idea of a Russian threat to, for example, the Baltics is complete madness. Are we really about to fight NATO? How many people are there in the NATO countries? About 600 million, correct? There are 146 million people in Russia. Yes, we're the biggest nuclear power. But do you really think that we're about to conquer the Baltics using nuclear weapons? What is this madness?" Putin said, speaking to Bloomberg.

© Flickr / Rock Cohen
Lavrov: European Union More Bureaucratic Than NATO
And Baltic countries' officials' fears do not end with the idea of a direct attack, Vzglyad noted. Estonian experts specifically "cannot exclude that defense ministers fear a 'hybrid attack' from the East, and for this reason are hurrying their Western colleagues along as much as possible to create the 'Defense Schengen'."

Speaking to the newspaper, Evgeny Krishtafovich, director of the Estonian Center for European Initiatives, suggested that "in a circumstance when there is no war officially, but an escalation of tensions in certain regions is taking place, it's necessary to respond to this not only using our national armed forces, but the forces of the alliance as well. The legal basis for this may need to be improved. Is Article 5 [on collective defense] enough? How can it be interpreted? Will it be necessary to use additional agreements?" These are the questions that need to be answered, the expert said.

In any case, 'Defense Schengen' would require a decision by the NATO Council, Krishtafovich added. This could be approved quickly enough, "since NATO is not the EU, and decisions are taken much more quickly; therefore, I do not see any political obstacles to its adoption within a reasonable timeframe."

Marko Mihkelson, the head of the Estonian parliament's commission on defense, told Vzglyad that a 'Defense Schengen' agreement would merely be a technical issue, since the transit of soldiers and equipment across NATO countries' borders is not considered a violation of sovereignty, even if it does require political permission.

© REUTERS / Ints Kalnins
Baltics Tense Over Moscow's 'Muscle Flexing' Amid NATO Buildup on Russian Border
For his part, Yuri Melkonov, editor of the Riga-based military-historical magazine Baltfort, said that Latvian officials have already taken a number of measures to simplify the movement of NATO troops across the country. "Each year, international exercises are held on the Latvian training ground at Adazi, for which Estonian units pass freely across the border to participate in artillery and anti-tank exercises. Small Latvian units [also] regularly participate in exercises in Lithuania and Estonia."

At the same time, Melkonov suggested that many Latvians are much more concerned about the country's economic problems than the mythical threat from the east. These problems include the loss of Russian markets for Latvian fish and milk products, and issues related with the country's declining population. The country has also lost nearly 630,000 people, or over 23% of its population, since the collapse of the Soviet Union (and half of them since its entry into the EU).

Finally, Vladimir Komoedov, chairman of the Russian Duma's Committee on Defense, suggested that Baltic and Polish officials look like they have nothing better to do than to conjure up the Russian threat. "Russia doesn't need them. Why are they doing this? Let them move their pawns on maps and across their territory…Russia does not have any plans to attack anyone; it has its own issues to think about."

Pivot to the North: NATO Trying to Move Closer to Russia's Borders