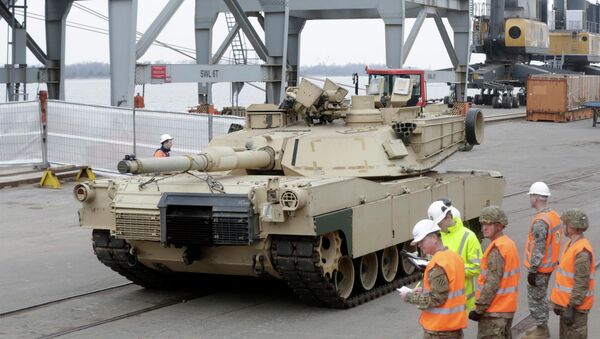 © REUTERS / Ints Kalnins
Subscribe
International
India
Africa
A team of NATO experts has arrived in Latvia ahead of the planned deployment of a Canadian-led battalion in this former Soviet republic. A similar 1000-strong NATO unit under German command will be stationed in Latvia’s neighboring republic of Lithuania.

The decision to deploy combat battalions in the Baltic countries and Poland is part of NATO’s current military buildup along the border with Russia.

Lithuania and Latvia are busily ramping up their armories trying to bring their defense outlays in line with NATO’s standard of 2 percent of the GDP.

During their recent summit in Warsaw, NATO leaders approved the deployment of four multinational battalions to the Baltic States and Poland.

Russia Invites NATO to ‘Play Open’ in Baltics, but Only on Quid-Pro-Quo Basis
The latest stage of such exercises, codenamed Saber Strike 2016, was held in June with tank drills in Latvia’s Adazi military base, located near the capital Riga.

Conducted annually since 2010, the Saber Strike exercise is a set of collaborative military training drills involving US and European forces that is held in multiple locations throughout Lithuania, Estonia, and Latvia.

On Friday Latvian, Estonian and Polish representatives headed to the Czech Republic to take part in NATO’s Ample Strike 2016 drills.

Slated to run until September 20, the exercises also involve military units from the US, Canada, Britain, France, Germany, Belgium, the Netherlands, the Czech Republic, Greece, Croatia, Slovenia, Hungary and Finland.

During a recent visit to Riga, US Vice President Joe Biden said that 170 military exercises and other joint events were scheduled for this year alone.

In August, Brigadier General Michael Gschossmann, commander of the ground-based component of the German Air Force,  said that the German and Dutch militaries were  working to create a joint air and missile defense task force – equipped with Patriot rockets – that will likely see future deployments in Poland or the Baltic states “to send a political signal” to Russia.

It was against the backdrop of this frenzied military activity that the Lithuanian and Latvian defense ministries  complained about the recent snap military drills in Russia which they described as a destabilizing factor and “a lack of transparency” on the part of Moscow.

But with all this NATO military buildup on its borders, Russia has every reason to create a credible deterrence against a possible aggression.