Towards an Alliance? Current State and Prospects of Russia-China Friendship

Russia and China are close political allies. Beijing is actively investing in the Russian economy. In future, the two countries may also form a military alliance, an article by Russian experts read.

© AFP 2019 / KIRILL KUDRYAVTSEV
Russia, China to See Multiple High-Level Meetings by End of 2016 - Russian Envoy
On September 2, the Eastern Economic Forum 2016 will kick off in Russia’s Vladivostok. The main topic on the agenda will be boosting economic cooperation between Russia and Asian countries.

The authors highlighted the main areas of cooperation between Moscow and Beijing and provided a prognosis.

China and Russia are major economic partners, including a number of infrastructure and investment projects. However, Russian and Western analysts have repeatedly claimed that economic cooperation between Moscow and Beijing is slowing down. 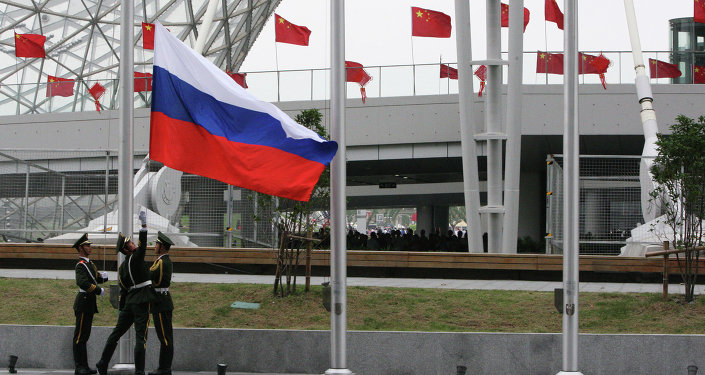 © Sputnik / Michael Klimentyev
New China-Russia Route Paves Way for Global Transit
The authors noted that the main problem in assessing the actual scope of this cooperation is the lack of reliable statistics. However, according to the article, economic cooperation between Russia and China is blooming.

Recently, Chinese economists assessed Chinese investments into the Russian economy at $32-33 billion, based on data about major Chinese projects in Russia.

"The sum says that China is already one of the biggest investors in Russia. […] In addition, China is Russia’s second-biggest trade partner, after the European Union, with a trade volume of $68 billion in 2015," Lenta.ru cited the article.

The crisis in Ukraine sparked debates on the possibility of a Russian-Chinese alliance.

However, both countries have repeatedly denied the idea of a formal political and military alliance due to obvious reasons, the article read. Such an alliance would justify the NATO expansion to the east as well as an increased US military presence in Asia.

"At the same time, a formal alliance would produce some benefits for both countries. First, it would provide security guarantees for Russia and China. Second, it would facilitate military and political coordination," the authors wrote.

Russia and China have long been engaged in intense military cooperation, including major joint drills since 2005. The Chinese military is also actively involved in Russian military contests, like the tank biathlon and Aviadarts.

Moreover, there has been an intense exchange of visits by the presidents and prime ministers of Russia and China. During his presidency, Russian leader Vladimir Putin has paid 11 official visits to China.

Moscow and Beijing also coordinate positions on a number of international issues, including Iran, Syria, US missile defense, and development of joint initiatives, including on global strategic stability and information security.

"The level of coordination and military cooperation between Moscow and Beijing is more than just a partnership. The economic part of the cooperation is not that developed as the military part but it’s also developing. As a result, cooperation between Russia and China already resembles an alliance," the article read.

The authors also noted that there are difficulties in Russian-Chinese ties, particularly in economic cooperation. For example, both the Russian and Chinese economies are dominated by bureaucratic state-owned corporations, slowing down many joint projects.

"Cooperation between Moscow and Beijing started in the mid-1990s and is now developing. The Ukrainian crisis and tensions in the South China Sea have slightly accelerated the cooperation. In the future, ties between Russia and China are likely to have clear strategic goals," the authors concluded.