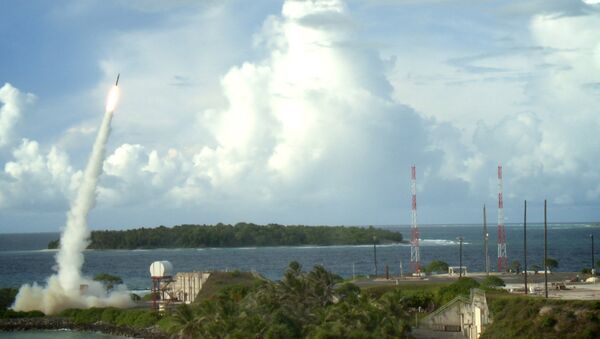 Amid massive protests, the South Korean Defense Ministry issued a statement pledging to minimize the damage from the US THAAD system on the Korean Peninsula. Russian military expert, Vladimir Yevseyev discussed with Sputnik the possible backlash from this deployment.

Over 900 South Koreans Shave Heads in Protest Over US THAAD System Deployment
The deployment of the US missile defense complex THAAD in South Korea was met with a wave of protests amongst the local residents. More than 900 residents of the North Gyeongsang province last week shaved their heads during a protest against the deployment.

The protesters believe that they have become hostages of the South Korean government and the United States, which, among other things, makes the country vulnerable to possible retaliation from Russia and China.

Russia has repeatedly stated that it is categorically against the deployment of THAAD in South Korea under the pretext of Pyongyang's nuclear threat.

The capabilities of detection of these complexes will make them able to observe ballistic and aerodynamic targets at a distance of up to 1.5 thousand kilometers. Hence, from South Korea it will be possible to look into the Russian territory and even into China’s territory.

In this situation, an appropriate response to Washington's actions could be the creation of a unified system of Russia and China, a sort of missile defense system, according to the military expert and Deputy Director of Institute of CIS countries, Vladimir Yevseyev.

The expert spoke to Sputnik in an interview saying that, “The US solves tactical problems, but very seriously loses strategically, as a consequence of the placement of US missile defense system in South Korea, the result would be the rapprochement between Moscow and Beijing, in particular, in the sphere of missile defense.”

N Korea Instructs Embassies to Use THAAD in South to Pit China Against US
The analyst spoke about the future of the military relations between Russia and China saying that it may be possible that the two countries form a joint center for missile attack warnings.

“As the next step it may be possible to conduct joint exercises in the Russian Ashuluk range. China, in turn, has combat lasers that are able to influence the objects in the near space. There was an incident when a Chinese laser made a Japanese satellite virtually unable to function. In Russia such lasers in combat methods have not been used yet,” Yevseyev said.

The analyst further explained that China is currently creating an analogue of the Aegis system, which is a marine version of the missile defense systems.

“Russia also has a missile defense system around Moscow, which has its own system, and it is not available in China so far. This system allows interception of destructive elements at altitudes of up to 60 kilometers. Thus, Russia and China have much to offer to each other.”

The first joint Russian-Chinese anti-missile drills using computer modeling was held in Moscow in the spring of this year.

The next step for Russia and China, according to Vladimir Yevseyev, can be real experience of intercepting ballistic targets at firing range in Ashuluk in the Astrakhan Region, if diplomacy and protests by the South Koreans are not able to stop the construction of the US missile defense system on the Korean Peninsula.