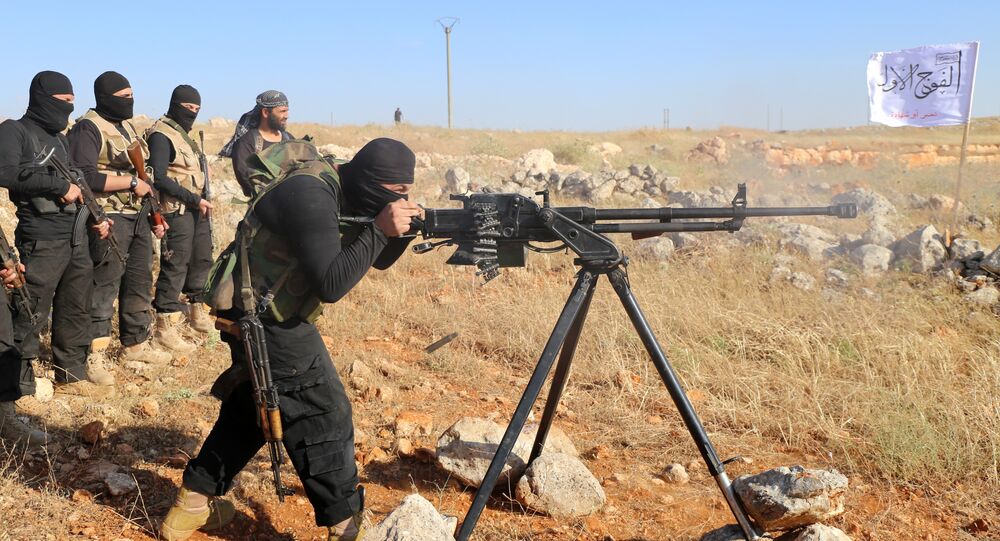 Eastern and Central European states have sold weapons worth $1.3 million to the Middle East, with some arms shipments ending in the hands of "Syrian mercenaries," including al-Nusra Front and Daesh, but these countries have refused to welcome refugees fleeing violence that they have helped to fuel, Deutsche Wirtschafts Nachrichten (DWN) asserted.

© AP Photo
US 'Definitely Involved' in Funneling $1.3 Bln in East European Arms to Mideast
According to a report unveiled last week, Bosnia and Herzegovina, Bulgaria, Croatia, the Czech Republic, Slovakia, Serbia and Romania sold weapons primarily to Saudi Arabia, but also to Jordan, the United Arab Emirates (UAE) and Turkey. Some of these armaments were then transferred to armed opposition and Islamist groups fighting in Syria and Yemen, two countries that have been ravaged by foreign-sponsored wars.

The research was conducted by the Balkan Investigative Reporting Network (BIRN) and the Organized Crime and Corruption Reporting Project (OCCRP). Their findings cover shipments made since 2012.

This business is so lucrative that Eastern and Central European states approved arms export licenses "despite ample evidence that weapons are being diverted to Syrian and other armed groups accused of widespread human rights abuses and atrocities," researchers observed.These licenses are supposed to guarantee where weapons end up and do not allow arms re-transfer to third parties. Yet this is exactly what has happened.

The arms shipments from Eastern and Central European countries to Syria rebels have only made matters worse in the country plagued by five and a half years of violence. They have "greatly contributed" to hundreds of thousands dying and millions fleeing to neighboring countries and Europe, DWN noted.

Moreover, the newspaper is convinced that the refugee crisis that European Union has struggled to resolve "could not have reached its current scale without" arms shipments from Bosnia and Herzegovina, Bulgaria, Croatia, the Czech Republic, Slovakia, Serbia and Romania.

Some of these countries, like Serbia, have firsthand experience of what the massive wave of refugees unseen since World War II has done to communities in the Balkans and Europe. Some of them, like the Czech Republic, Slovakia and Romania, have refused to resettle asylum seekers on their territory, at least in the amounts that will make a difference.

© Flickr / coolloud
Eastern Europe 'Flooding' Middle East Battlefields With Weapons
In 2014, Prague that sold weapons worth more than $300 million to buyers in the Middle East, promised to accept 1,100 refugees. A year later the Czech government declined to welcome additional 1,691 refugees under an EU-wide plan.In March, Czech Prime Minister Bohuslav Sobotka confirmed that the country will implement its part of the refugee deal inked by the EU and Turkey, but added that it will not take more migrants than it promised earlier.

For his part, Slovak Prime Minister Robert Fico described the EU's migrant policy as a "ritual suicide" in January 2016. In May, he said that the country refused to admit migrants because "Islam has no place in Slovakia."