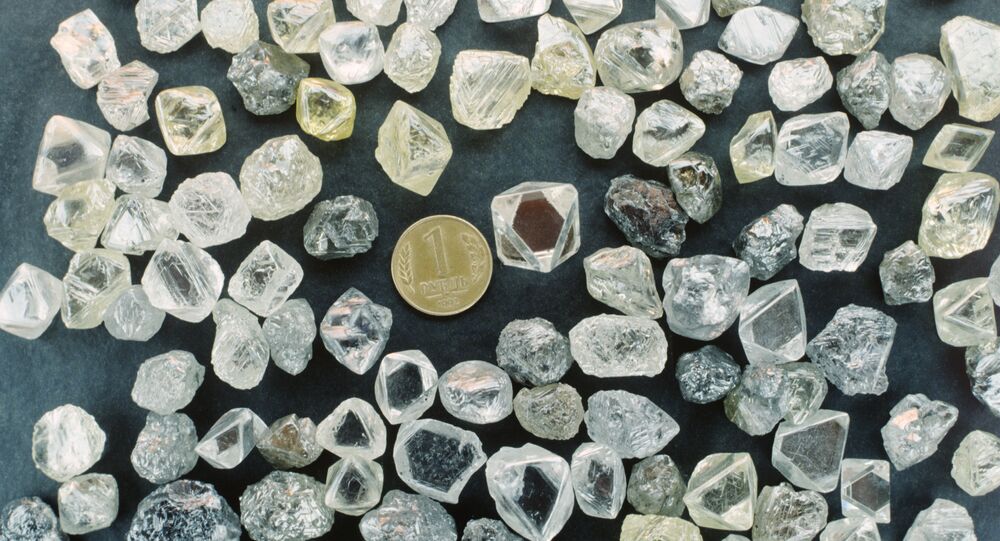 As clouds gather on the global market's horizon, investors are turning to gold and diamonds to weather the potential storm: bullion and gems are doing pretty well this year.

As the rough diamond market continues to recover after having stagnated in 2015, Russian diamond miner Alrosa Group has boasted stronger sales in the first quarter of 2016: the company's revenue soared by almost 37 percent, reaching $1.56 billion, while its profit more than doubled to $758.8 million.

"Revenue from diamond sales jumped 41 percent to $1.48 billion, with sales to Belgium, Alrosa's largest trading partner, soaring 43 percent to $774 million. Sales to India surged 58 percent and revenue from Israel and the United Arab Emirates both increased. The company accumulates sales from other revenue streams such as its gas and transport divisions," Rapaport News reported Tuesday.

© Sputnik / Aleksandr Utkin
Traders' New Best Friend: Diamond Futures Set to Sparkle on Moscow Exchange
Alrosa is one of the world's largest producers of rough diamonds in carat terms, accounting for about a third of global rough diamond production. Alrosa shares its top positions with the Anglo-American company De Beers, which many credit with having popularized the purchase of diamond engagement rings. Together the giants control about two-thirds of the market.

Remarkably, unlike the world's petroleum producers, which are currently engaged in a fierce competition, the two companies have co-existed peacefully for decades.

Furthermore, the Anglo-American cartel stepped in ready to cooperate with the Soviet government when the USSR entered the diamond market in the 1950s. To prevent market turbulence, De Beers struck a deal with the Soviet Union to purchase more than 90 percent of Russia's annual diamond output.

In response to China's slowdown and an ongoing recession in the West which resulted in gem prices slumping in 2015, Alrosa and De Beers simply choked off the supply "to bolster prices, leading to shortages of some stone types and helping to boost demand this year," Bloomberg narrates.

"While De Beers cut prices for gems this year before raising them for the first time in more than a year at its April auction, Alrosa has kept them stable in all its 2016 trading sessions," the media outlet explains, citing Alrosa's Chief Executive Officer Andrey Zharkov.

According to Zharkov, "price competition isn't the driver for this market."

© CC BY 2.0 / Bullion Vault / gold bar on coins
Gold Back in Fashion? Why Precious Metal Has Made an 'Amazing Comeback'
Apparently therefore, Alrosa has recently revised its output target for 2016: it was expected that the company will produce up to 39 million carats this year. However, now it sees its target at 37 million carats.

Simultaneously, the company is seeking to boost its sales in Southeast Asia.

As of yet, only five percent of Alrosa's sales are in China, but the company is planning to double the figure in the nearest future.

Moreover, according to Rambler News Service, Alrosa is considering the possibility of direct sales to its Southeast Asian customers bypassing the Antwerp Stock Exchange, where the company's diamonds are traded.

Svetlana Shelest of Rapaport Magazine has called attention to the fact that the mining company is also pushing ahead with its project to develop a rough and polished trading platform in Vladivostok, which it announced in 2015.

"Trading in Vladivostok will be organized and run by ALROSA itself — unlike trading at the Moscow Exchange — and primarily be aimed at developing an export-import exchange with the Asia-Pacific region, taking advantage of the mining company's stock and infrastructure and the free port privileges of Vladivostok," Shelest underscored.

© Photo : Rio Tinto
Extremely Rare Violet Diamond Worth Millions Discovered in Australia
Remarkably, Alrosa will also launch the trading of investment diamonds at the Moscow Exchange. In late April, Alrosa spokesman Aleksandr Tikhomirov told RBK that the company intends to offer futures contracts in near colorless or faint yellow diamonds. So far, the Moscow Exchange is likely to join famous diamond markets like the Israeli Diamond Exchange and the Antwerp Diamond Bourse.

What's more important, the Kremlin has approved the partial privatization of the diamond company. Moscow plans to sell 10.9 percent of the government's stake in Alrosa, aiming to make more than 60 billion rubles ($909 million) this year. The Russian government (43.9 percent), Russia's Republic of Sakha (25 percent) and ulus of Yakutia (8 percent) are the company's largest shareholders.

Following the announcement, Chinese investors have signaled their interest in the partial privatization of the company.

But that is not all: despite the Western sanctions policy championed by Washington and Brussels, American and British investors are considering buying Alrosa stakes as well, and with good reason. The company is demonstrating sustainable growth with its market capitalization having risen 41 percent to $8.8 billion this year.

Power Versus Integrity: Diamond Gets Crushed by Hydraulic Press