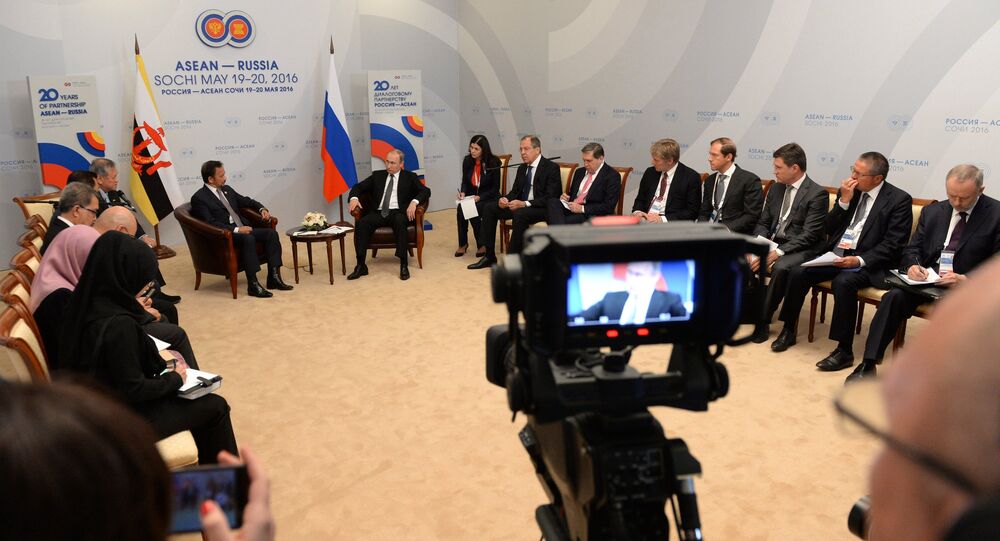 Russia is bolstering its ties with the countries of the Association of Southeast Asian Nations (ASEAN) bloc. What lies at the root of Moscow's recent charm offensive?

© Sputnik / Evgeny Biyatov
Putin: Russia Interested in Closer Business Cooperation With ASEAN
While the West continues its sanctions policy aimed against Russia, the Kremlin has turned to the East, seeking to establish close and mutually beneficial cooperation with the countries of the ASEAN bloc.

On May 19-20 the Russian city of Sochi hosted the Russia-ASEAN summit marking the 20th anniversary of partnership between Russia and the emerging economies of Southeast Asia which they formalized back in July 1996.

The summit brought together the leaders of Brunei-Darussalam, Cambodia, Indonesia, Laos, Malaysia, Myanmar, the Philippines, Singapore, Thailand and Vietnam.

© AFP 2020 / STR
De-Dollarization: Who Stands in the Way of Beijing's Own Crude Futures
While Russia's trade with the ASEAN countries remained low in 2015, the Russian leadership is determined to boost it in the coming years. In its turn Moscow can provide its rich hydrocarbon reserves and technologies to the emerging ASEAN economies.

In his interview with Sputnik ASEAN Secretary-General Le Luong Minh underscored that the ASEAN and the EAEU have great potential for cooperation as they share the same goals in the Eurasian region.

© Sputnik / Sergey Guneev
'Go East': Why EU Should Stop Building NATO Bases and Turn to Russia, China
And there is a good precedent for this: back in May, 2015 EAEU members struck a free trade zone deal with Vietnam; the deal is due to start operating at "full capacity" in June 2016. Furthermore, in late 2015 the EAEU kicked off negotiations on a similar agreement with Singapore.

Russian Chamber of Commerce and Industry President Sergey Katyrin believes that all ASEAN countries will soon ink the free trade zone agreement with the EAEU.

What lies at the root of the Kremlin's diplomatic charm offensive?

According to CBNTV, the trigger for Russia's more active efforts aimed at involving the Southeast Asian nations is the Trans-Pacific Partnership (TPP) project championed by the United States.

By strengthening collaboration with the ASEAN bloc, Russia aims to diminish the negative impact of the TPP on its economy.

However, much remains to be done, the media outlet notes: the ASEAN-Russian trade volume has decreased in the last five years in comparison with the previous 5-year period; the amount of Russia's direct investments in ASEAN economies has plummeted from $540 million in 2013 to $30 million in 2014. Today Russia's investment activity in the region leaves a lot to be desired, according to CBNTV.

In light of this, bolstering the Russo-ASEAN collaboration is the issue of an ultimate importance for the Kremlin, the media outlet stresses, drawing attention to the fact that China, Japan and South Korea have long ago concluded free trade zone agreements with ASEAN.

Still Moscow has a number of competitive advantages that makes it especially interesting to the Asian bloc: the biggest country on the continent and a leading member of the growing EAEU organization, Russia possesses both resources and unique technological expertise to facilitate the region's growth. Moreover, Moscow is not an economic "rival" but a partner to China, South Korea and Japan.

At the same time the Sino-Russian synergy is the key to the development of the pan-Eurasian New Silk Road project, kicked off by Beijing.

"The Commemorative Summit has affirmed that Russia is an important dialogue partner for ASEAN.  The Summit showed that there is a strong political commitment for us to broaden and deepen cooperation, and that is reflected in the Sochi Declaration and the new ASEAN-Russia Plan of Action."

'Anomaly, Affront, Obstacle': Why G7 Has Outlived Itself