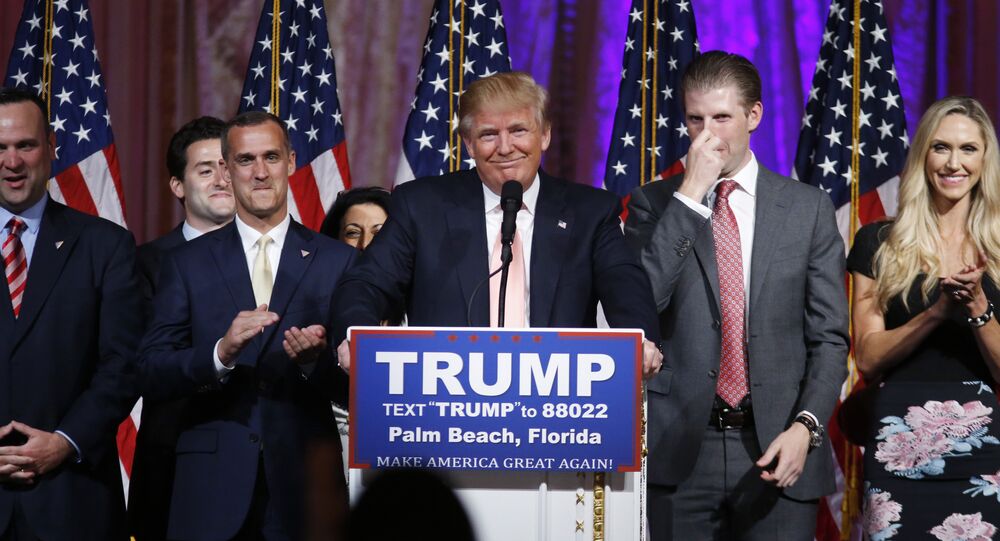 While GOP's Mitt Romney and William Kristol are at pains to recruit a third-party conservative candidate to defeat Donald Trump, Patrick J. Buchanan explains why the plot will result in the ultimate victory of Hillary Clinton.

US author, conservative commentator and syndicated columnist Patrick Buchanan believes that the latest GOP plan to "sink" Donald Trump in the 2016 presidential race is political suicide for the Republicans.

The initiative aimed at recruiting a "third-party conservative candidate" has been kicked off by Mitt Romney, the Republican Party's nominee for President of the United States in the 2012 election, and American neoconservative political analyst William Kristol.

"Several big-name Republican 'consultants' and 'strategists' are said to be on board. Understandably so, given the bucks involved. With the kind of cash that sloshes around in a presidential campaign, there should be no shortage of super PAC parasites at the enlistment office," Buchanan writes in his Op-Ed for the American Conservative.

© REUTERS / Jim Urquhart/File Photo
Diplomacy and The Art of the Deal: Trump, Kissinger to Talk Foreign Policy
The political commentator calls attention to the fact that what is still missing is "the kamikaze pilot who gets just enough fuel to make it out to the fleet."

Buchanan poses yet another question: Why doesn't Romney  want to take on the assignment himself?

"Yet, Romney is asking others to undertake a mission that will kill their careers and make them pariahs in their party, but will not do it himself," the commentator points out.

Citing Reince Priebus, an American attorney and the chairman of the Republican National Committee, Buchanan labels "the entry of a third-party conservative in the presidential race a 'suicide mission'."

"They can try to hijack another party and get on the ballot, but, look, it's a suicide mission for our country because what it means is that you're throwing down not just eight years of the White House but potentially 100 years on the Supreme Court and wrecking this country for many generations," Priebus said on "Fox News Sunday," as quoted by the Washington Post.

© REUTERS / David Becker/Nancy Wiechec
Poll: Trump Narrows Gap With Clinton Nationally in US Presidential Election
Furthermore, according to Buchanan, by doing this GOP would certainly be shooting itself in the foot.

"Such a candidate would siphon off votes that would otherwise go to Trump, bring down the ticket, and result in Hillary Clinton becoming the 45th president," he underscores.

"And that would mean Roe v. Wade would never be overturned, affirmative action would be forever, and the social revolution that declared same-sex marriage a constitutional right would roll on. A Clinton presidency would also mean Obamacare is forever," Buchanan adds.

Incredible as it may seem, the Romney-Kristol initiative would play directly into the hands of GOP's political opponents.

"By scheming to divide the Republican base, they are colluding to bring about the defeat of the Republican Party. And that means Bill and Hillary Clinton back in the White House," he stresses.

"What is still lacking in this campaign is clear denunciation of the very worst of Hillary Clinton's many negative traits: her eagerness to go to war. And it is not merely Hillary who needs to be defeated: it is the entire militaristic power structure she represents," renowned American political writer Diana Johnstone emphasized in her April article for CounterPunch.org.

Family Budget? Clinton to Entrust Husband With US Economy's Revitalization