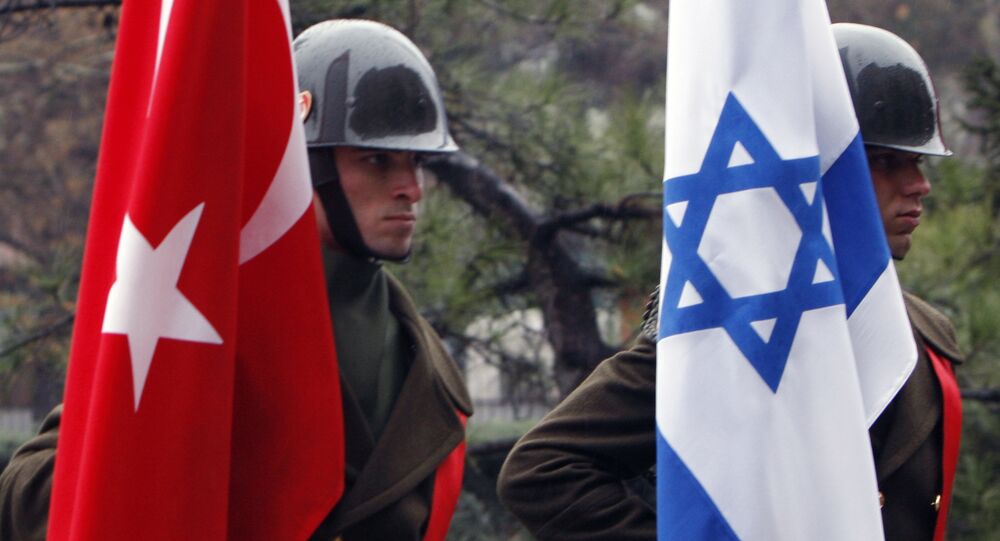 According to various reports it is possible that an agreement on normalization of relations between Turkey and Israel may soon be reached. In an exclusive interview Sputnik talked to a political commentator regarding this agreement and the future of the two country's relations.

There has been a long ongoing discussion about the possibility of establishing contact at the government level after a major fallout in 2010 when the flotilla ship Mavi Marmara was seized.

Political commentator for Shalom newspaper and Hurriyet Daily News Celine Nasi in an interview with Sputnik commented on the situation of Turkish-Israeli relations on the eve of a possible signing of the agreement.

© REUTERS / Tumay Berkin
Could Istanbul Terror Attack Actually Bring Turkey and Israel Together?
According to Nasi, despite the overall positive attitude of the parties, controversy over some important points, such as the lifting of blockade of the Gaza Strip, still remains.

“Turkey has strongly demonstrated that normalization of relations with Israel is only possible at the background of progress on the Palestinian issue. Despite the fact that the formation of relations between Turkey and Israel is based on economic and strategic interests of both the countries, the condition of lifting of the Gaza blockade, put forward by Turkey, continues to create some difficulties in the negotiation process.”

The analyst further said, “Meanwhile, Turkey still showed some flexibility on the issue of Israel's fulfillment of the three conditions set by Ankara after the incident with the Mavi Marmara ship. Firstly, the Turkish side insisted on the full lifting of blockade. Then we saw that this condition was replaced by the requirement to recognize certain benefits and privileges for Turkey on the issue of supply of goods to Gaza. After the operation in 2014, Israel provided a certain relief in terms of supplies of goods into Gaza and providing entry and exit of people.”

Despite the active steps which have been expressed in the meetings of Erdogan's government with representatives of the Israeli lobby in the United States and the leaders of the Jewish community, the anti-democratic actions of the Turkish authorities, violations of rights and freedoms, as well as the use of anti-Semitic rhetoric have been a matter of concern.

Speaking about these troubles the Jewish community has, Nasi said, “It would be ideal if Ankara in parallel with the establishment of relations with Tel Aviv, expressed a clear position on the issue of combating anti-Semitism. But the policy is based on its own rules. I think this process will take place with varying speed and intensity.”

The analyst further said, “Anti-Semitism requires considerable time and political will. At the moment, I do not see a situation in which case there would be a political will.

Meanwhile, it must be emphasized that the two sides for a long time tend to avoid the use of rhetoric that could harm the course of the negotiation process. You cannot even compare the level of anti-Semitism, which was observed in the last period with what is happening now. However, Turkey needs to take more concrete steps in this direction.”

Nasi said that anti-Semitism is a cultural, social problem, a problem of religious education and training, which is also fueled by political rhetoric. Furthermore, it takes a long time to overcome it. “I believe that if the relationship between the two countries is actively build, the degree of tension in the Jewish community living in Turkey, will gradually decline.”

Abbas: Muslim Countries Should Support Palestine in Conflict With Israel

Turkey Becomes ‘Magnet for Thousands of Religious Fanatics and Murderers’