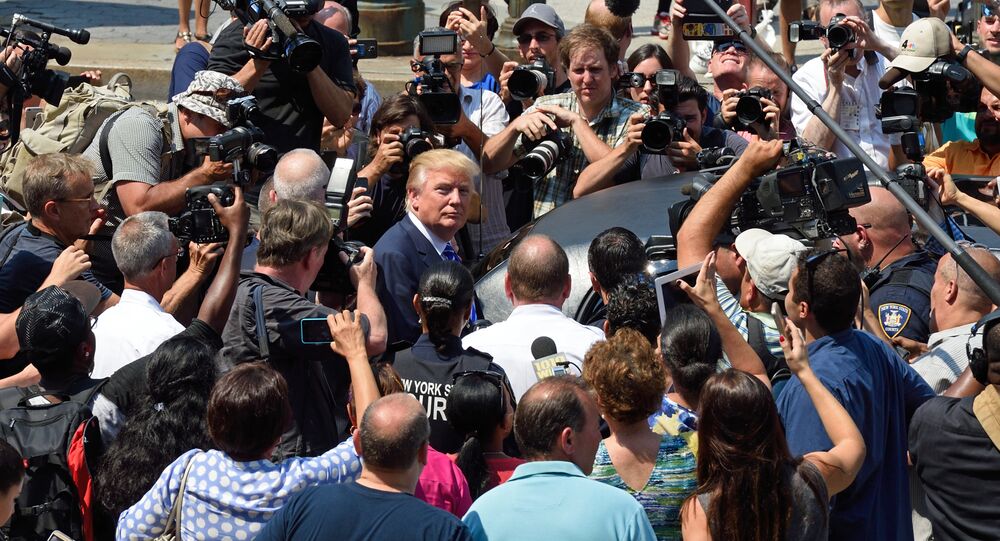 Why does the American establishment hate Donald Trump? The answer is that Trump turns the spotlight on the US corporatocracy's stripping the American middle-class of their good blue-collar jobs, social benefits and opportunities, Canadian academic John McMurtry believes.

There is something mysterious about the unanimous animosity towards presidential candidate Donald Trump, demonstrated by both GOP members and Democrats, Canadian author and Fellow of the Royal Society of Canada John McMurtry.

"A primal rage unites the political establishment across party lines, but they can't say why," McMurty notes in his article for CounterPunch.org, adding that still "Trump's underlying betrayal of the ruling game remains unspeakable on the stage."

What lies at the root of the American establishment's outrage?

© REUTERS / Jonathan Ernst
The Donald Haters: What is Truly Behind Neocons' Anti-Trump Hysteria?
"[Trump] is pervasively mocked, accused and slandered in non-stop public fireworks of ad hominem hits, but the counter-attacks never engage what Trump has set his sights on — the long stripping of America by corporate globalization selecting for the limitless enrichment of the very rich living off an ever-growing take from public coffers and the impoverishment of America's working people," the Canadian academic explains.

Trump is giving Washington's political elites and their corporate backers the shivers.

He says that he will cut the Pentagon's budget by half. He insists that Washington 'must be neutral, an honest broker' on the Israeli-Palestine conflict. He targets Big Pharma by planning to save up to $400 billion via government negotiation of prices. And he was open to nationalizing the Wall Street banks following Global Financial crisis of 2008.

What presidential candidate has ever dared to say that?

"Most of all, Trump rejects the whole misnamed 'free trade' global system because it has 'hollowed out the lives of American workers' with rights to corporations to move anywhere to get cheaper labor and import back into the US tariff-free," the Canadian author emphasizes.

© REUTERS / Rhona Wise
Structural Inefficiency: Trump Warns of ‘Very Massive Recession' Up Ahead
Furthermore, Trump has not joined the chorus of those who brand China and Russia as "existential" threat to the US security. Quite the contrary, he asks: "Wouldn't it be nice to get along with Russia and China for a change?"

The proposed policies threaten the ruling elite and its money interests, which depend on "the superpower public purse."

"The electoral dynamite of all the Americans who have lost all their good blue-collar jobs, social benefits and public infrastructures is recognized only in class condescension. But the facts cannot be denied of a corporate globalization effectively stripping the lower middle classes and the public realm itself with no-one in Washington establishment saying a word against the greatest transfer of wealth to the 1% in history," the Canadian academic underscores.

McMurtry's vision echoes the stance of CIA veteran Philip Giraldi, who wrote in his March article for The Unz Review:

"Now we all know that many of those, who are hating on Donald Trump, are doing so because he is threatening the cozy-crony-politico-predatory-capitalist system that has made so many of them fat and rich," the CIA veteran emphasized.

In his turn, Patrick J. Buchanan, the US conservative commentator, notes in his recent Op-Ed for The American Conservative that transnationalism and globalism are "moribund."

Buchanan calls attention to the fact that Trump has become a real game-changer.

"Whatever happens to Trump, the country has spoken," he stresses.

"And if the establishment refuses to heed its voice, and returns to the policies the people have repudiated, it should take heed of John F. Kennedy's warning: 'Those who make peaceful revolution impossible, make violent revolution inevitable'," Buchanan warns.

According to McMurtry, Trump is a "pure capitalist" and by no means a "working-class hero," but he is the only presidential candidate who turned the spotlight on the rotten system which is undermining the US economy and social stability.