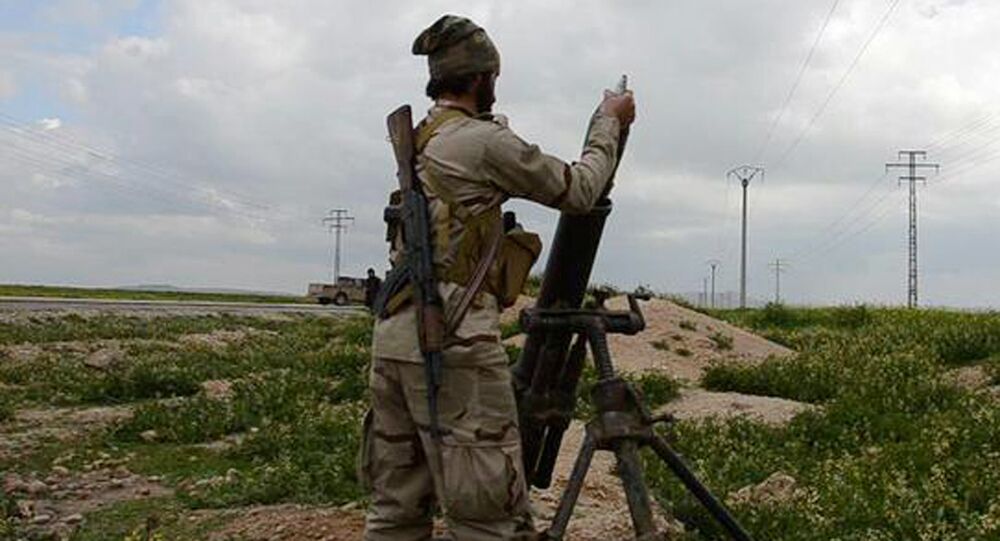 The more military aid Washington and its allies funnel into the hands of Islamists in Syria and Iraq, the more groups like Daesh and al-Qaeda will emerge, spreading their tentacles far beyond the Middle East, American author Daniel Lazare writes.

While Western media pundits are trying to pin the blame for the ongoing turmoil in Syria on Bashar al-Assad, they remain silent about the role Washington and NATO played in funneling military aid into the hands of Sunni extremists in the region, American author Daniel Lazare remarks in his article for Consortiumnews.com.

To illustrate his point, Lazare refers to the liberation of Palmyra by the Syrian Arab Army with the assistance of the Russian Aerospace Forces.

The American author writes that instead of praising Bashar al-Assad for Palmyra's recapture, some Western media sources pointed the finger of blame at the Syrian Arab Army for ceding the site back in May 2015 to Daesh.

© AFP 2021 / STRINGER
Why Western Media Try to Downplay the Importance of Palmyra's Liberation
"When the Islamic State [Daesh] captured the city in May, the militants faced little resistance from Syrian troops," The New York Times reports.

Lazare dismisses the narrative as inaccurate and points to the fact that in May 2015 the Syrian Arab Army had resisted Daesh's advance for seven or eight days and then carried out a counter offensive against Islamists in the city's outskirts.

But, according to the author, it's half the story.

"The real story began two months earlier when Syrian rebels launched a major offensive in Syria's northern Idlib province with heavy backing from Turkey and Saudi Arabia. Led by al-Nusra [Front], the local al-Qaeda affiliate, but with the full participation of US-backed rebel forces, the assault proved highly successful because of the large numbers of US-made optically guided TOW missiles supplied by the Saudis," Lazare narrates.

He explains that the missiles allowed the rebels to gain the upper hand over the Syrian Arab Army and to destroy dozens of the Syrian government's tanks and other military vehicles.

As a result, al-Nusra Front and its allies continued to advance towards the government army's stronghold in Latakia to the delight of Washington officials.

"The trend lines for Assad are bad and getting worse," senior United States official in Washington told The New York Times in late April 2015.

© AP Photo / Khalil Hamra
Strange Bedfellows in Syria: What Washington Prefers Not to Speak Of
It's hardly surprising that Syrian militants and their al-Nusra Front ally were gaining ground, given the fact that Washington and Saudi Arabia poured billions of dollars into the rebel forces, Lazare remarks.

The situation played directly into the hands of Daesh which then launched an all-out advance against Palmyra.

To add insult to injury, the Pentagon and its NATO allies suspended bombing the so-called Islamic State as it neared Palmyra. Washington's officials explained at the time that by attacking Daesh the US-led coalition would have saved Bashar al-Assad. And it was not in the White House's interest.

"The upshot was a clear message to ISIS [Daesh] to the effect that it had nothing to worry about from US jet bombers as long as it engaged Assad's troops in close combat. The US thus incentivized ISIS to press forward with the assault," Lazare writes.

© Sputnik / Dmitry Vinogradov
American Pilots 'Admire Their Russian Counterparts' for Defeating Daesh
"Although residents later wondered why the US had not bombed ISIS [Daesh] forces 'while they were traversing miles of open desert roads,' the answer, simply, is that Washington had other things on its mind," he notes, adding that Washington's primary goal was to oust Assad.

However, Washington's "fundamental ambivalence" toward Daesh and al-Qaeda has eventually resulted in the upsurge of violence in Europe, the US author stresses.

The US leadership and NATO member states use Syrian President Bashar al-Assad as a scapegoat to avoid taking responsibility for their own contribution to the emergence of the Islamic extremism in the region.

"But the more aid the US and its allies funnel into the hands of Sunni terrorists, the more groups like ISIS [Daesh] and al-Qaeda will grow and the farther their reach will extend. The upshot will be more bombings and shootings in Paris, Brussels, and who knows where else," Lazare warns.

Fake Tolerance and Terror: Europe's on Alert and the Clock Is Ticking