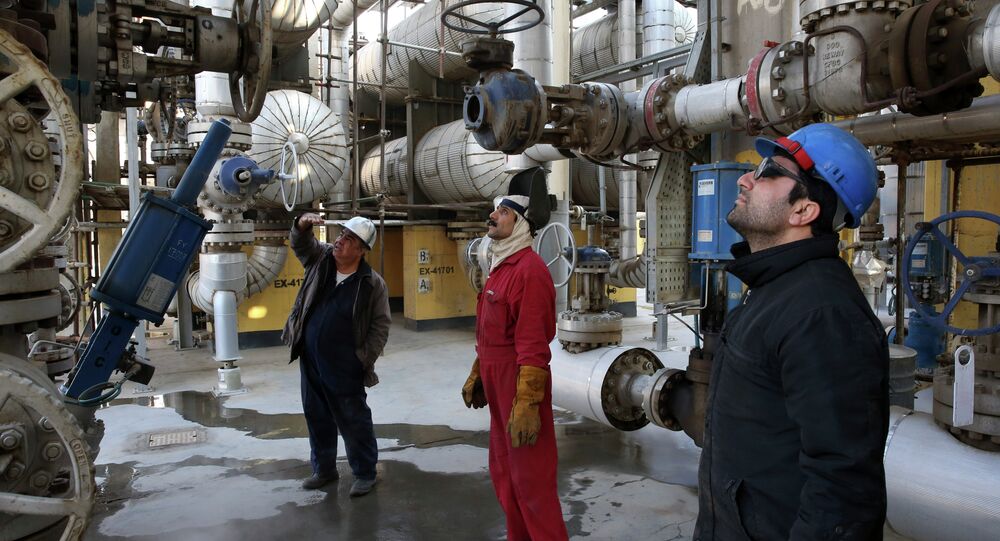 Oil Rivalry: How EU is Twisting Iran, Saudi Arabia Around Its Little Finger

The European Union is exploiting the Saudi-Iranian rivalry to its own advantage, political analyst Salman Rafi Sheikh notes, stressing that the supposedly 'historic' EU resolution which calls to impose arms embargo on Riyadh has added fuel to the fire.

The EU's February resolution calling for the imposing of arms embargo against Saudi Arabia has really nothing to do with the Yemeni humanitarian crisis, according to Salman Rafi Sheikh, research-analyst of International Relations and Pakistan's foreign and domestic affairs.

The resolution is a mere political provocation which aims to manipulate Riyadh into further business concessions, the expert believes, calling attention to the fact that Brussels has as yet failed to condemn Saudi Arabia's funding of Islamists in Syria and Iraq.

"While the language of the resolution and the 'concerns' voiced regarding Saudi Arabia's in-humanitarian policies in Yemen seem good, the fact of the matter is that neither the EU is really touched by the loss of life and property in Yemen nor does it feel compelled to extend relief to the 14.4 million people, who are reportedly reaching the point of starvation in Yemen, by merely imposing embargoes on Saudi Arabia," Sheikh suggests in his article for New Eastern Outlook.

© AP Photo / JOHN MOORE
Riyadh's Worst Nightmare: Is Saudi Arabia's Oil Business Going Bust?
The European Parliament resolution of February 25, 2016 on the humanitarian crisis in Yemen refers to "grave concerns" over the deterioration of the situation on the ground.

It "calls on the VP/HR to launch an initiative aimed at imposing an EU arms embargo against Saudi Arabia, given the serious allegations of breaches of international humanitarian law by Saudi Arabia in Yemen and the fact that the continued licensing of weapons sales to Saudi Arabia would therefore be in breach of Council Common Position 2008/944/CFSP of 8 December 2008."

Furthermore, the European Parliament "believes that Saudi Arabia and Iran are instrumental in resolving the crisis, and urges both sides to work pragmatically and in good faith to end the fighting in Yemen."

According to Sheikh, Brussels is deliberately fanning the flames of the Saudi-Iranian rivalry. The crux of the matter is that the two countries are Europe's longstanding oil providers.

© AFP 2021 / PATRICK HERTZOG
'We Feel Your Pain': Who Benefits From EU Sanctions Against Russia?
As sanctions on Iran are lifted, Tehran has rushed to regain its niche in the European market by cutting its crude price significantly. It goes without saying that by doing so Iran hurts Saudi Arabia's interests.

In their turn, European decision-makers are rubbing their hands and planning to benefit from the cheap Middle Eastern crude.

"Europe, as such, stands to benefit from the Iran-Saudi tussle to dominate the European market," the expert remarks.

"Although the 'anti-Saudi' resolution of EU parliament cannot be categorically explained as actual distance emerging between Saudi and Europe, it certainly reflects the European tactic to trick both countries into lowering down the oil prices to the minimum — a situation that directly adds to the Europe's fragile economic position, help it manage its industrial production costs and balance of payments," Sheikh underscores.

Meanwhile, the Middle Eastern rivalry over oil production may also influence Russia and OPEC's plans to freeze crude output. According to Reuters, the upcoming March 20 meeting between oil producers is hanging in the balance since Tehran is yet to say whether it will participate in the deal.

"Tehran has rejected freezing its output at January levels, put by OPEC secondary sources at 2.93 million barrels per day (bpd), and wants to return to much higher pre-sanctions production," the media outlet reported citing a source familiar with Iranian thinking.

Did the Saudis Just Win? 5 Signs That the Oil Crisis May Be Over

Saudi Arabia's Oil Freeze May Be More Political Than Business-Driven