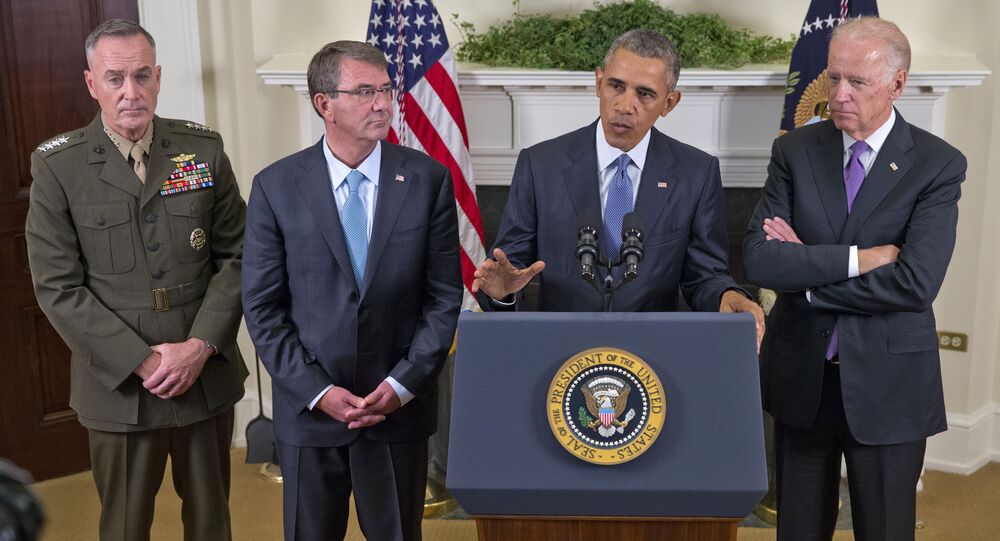 There is the possibility that American warhawks and their strange bedfellows – Saudi Arabian intelligence services – would throw a monkey wrench in Syria's ceasefire to upset the deal, Czech-based freelance journalist and analyst Martin Berger believes.

While the Syrian ceasefire agreement, brokered by Russia and the US, is regarded by many as light at the end of the tunnel, the Pentagon and CIA hawks do not seem enthusiastic about the ongoing peace effort at all.

They even went so far as to predict the failure of the ceasefire agreement before it has even come into force and call for "inflicting real pain on the Russians."

"Of course, one could only be amazed by such behavior from Washington's 'hawks' if one did not take into consideration the evidence exposing their direct involvement in the continuous aggravation of the situation in Syria, which makes them directly responsible for the deaths of thousands of civilians. Those actions would for sure present the perfect subject for a careful investigation of an international tribunal," Czech-based freelance journalist and analyst Martin Berger writes in his article for New Eastern Outlook.

© Sputnik / Dmitriy Vinogradov
Out to Win: Why Syria Ceasefire Deal is a Huge Victory for Russia
Citing Daveed Gartenstein-Ross and Nathaniel Barr of the Daily Beast, the journalist points out that the Central Intelligence Agency (CIA) is now involved in assisting the terrorist organizations which Washington has been allegedly fighting against for more than decade.

"The CIA's program, launched in 2013, initially was conceived as a way of strengthening moderate rebels fighting Bashar al-Assad's regime without significantly increasing the US footprint in the conflict," the journalists wrote in their January article.

But soon things got ugly on the ground. The CIA-backed groups sided with Islamists including the notorious al-Qaeda affiliate al-Nusra Front, claiming that it was a "marriage of necessity."

"At this point it is impossible to argue that US officials involved in the CIA's program cannot discern that Nusra and other extremists have benefited. And despite this, the CIA decided to drastically increase lethal support to vetted rebel factions following the Russian intervention into Syria in late September,"Gartenstein-Ross and Barr admitted.

© REUTERS / Abdelrahmin Ismail
Divide and Conquer: Does Kerry's 'Plan B' on Syria Originate From 2008 Secret US-Saudi Plan?
Furthermore, another investigation carried out by Mark Mazzetti and Matt Apuzzo for The New York Times described in detail how Washington was using Saudi money to provide jihadists in Syria with lethal weapons, Berger underscores.

However, he adds, this is just an episode in a long string of Saudi-American controversial covert operations in the Middle East, Central Asia and Africa.

In a recent interview with Sputnik, American author and historian F. William Engdahl said that an 'unholy alliance' between the CIA and Islamists was established in the early 1950s.

"In my most recent book, The Lost Hegemon: Whom the gods would destroy, I describe in great detail the perverse 'unholy alliance,' brokered by the CIA in the early 1950s to mate the Egyptian death cult known as the Muslim Brotherhood with the primitive Saudi Wahhabist branch of Islam. The consequence of that was Mujahedeen, the Chechen wars, Bosnia's Mujahedeen war against the Serbs, and now Al Qaeda-Al Nusra and Daesh," Engdahl told Sputnik.

© Sputnik / Valeriy Melnikov
Syria Ceasefire: Who is Interested in Upsetting the Deal?
Berger emphasizes that in light of this we may assume that US warhawks would try to dent any progress made in Syria, since they are not interested in any victory for Russia, be it diplomatic or military.

"It would be safe to assume that the CIA will be put in charge of the operation, funded with the money provided by Saudi Arabia, therefore we can await provocations and misleading articles about how it is Russia who is continuing with provocations, not these forces hidden in plain view," the Czech-based journalist stresses, adding that one should not be surprised that Washington has already come up with Plan B.

According to Berger the international community should prevent the failure of the ceasefire agreement by exposing these warhawks, namely the CIA, the Pentagon and the Saudi secret service.