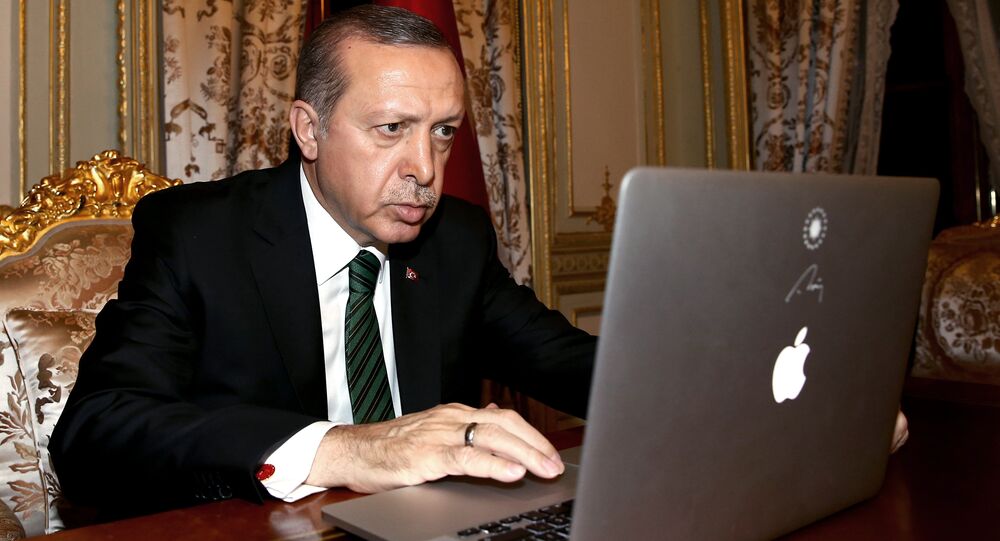 President Erdogan's politics of confrontation with the Kurds will only further complicate Ankara's relations with Russia and the US, and lead to an escalation of internal tensions, writes Deutsche Welle columnist Kersten Knipp. The Turkish president, he says, is painting himself into a corner, while continuing to project a false image of strength.

© AFP 2021 / DELIL SOULEIMAN
Crying Wolf: Ankara Adopting 'Terror' Methods in War Against Kurds
The international community, Knipp recalls, has responded with a sense of astonishment that the Turkish police managed, in a matter of mere hours, to identify the perpetrator of Thursday's deadly attack in Ankara – allegedly the Syrian Kurd Salih Necar. Meanwhile, the columnist suggests, "conclusive evidence of the young Syrian's responsibility" has not yet been provided.

Erdogan, Knipp notes, has spoken about 'information and documents', but has yet to present the evidence. "At the same time, the PYD denied any connection to the attack," which failed to make an impression on authorities, who "launched new deadly attacks on PYD areas around Aleppo."

Unfortunately, the journalist writes, "Turkey is waging a war not against Daesh (ISIL), and not so much against Syrian President Bashar Assad, as against the Syrian Kurds. The fact that they seek to build their own government in the immediate vicinity of Turkey is an abomination for Ankara."

Erdogan's decision to fight the Kurds "will not be without foreign and domestic political consequences. In foreign policy, it is likely to strain the relationship with both the US and Russia." Both countries cooperate with the YPG, the armed wing of the PYD. "For both, the YPG is a valuable partner in the fight against Daesh."

As a result, "How Turkey, in view of these two protective powers, will effectively be able to combat the YPG, remains a mystery to Turkish generals. If Turkey invades Syria or even sends its aircraft there, it will immediately find itself opposite the Russian military."

© AFP 2021 / BULENT KILIC
Turkey Continues Shelling of Northern Syria
Moreover, Knipp notes, domestically, Erdogan must deal with the fact that "the Kurds living in Turkey are closely monitoring how the president is treating their compatriots living on the other side of the border."

"Altogether, none of this is good for Turkey. Fewer tourists are coming into the country, the economy is faltering, inflation is on the rise. Add to this the Syrian refugees, whose acceptance is falling among the Turkish population, which in itself may [also] increase domestic pressures. But Erdogan is doing nothing in his foreign and domestic policy to lower them, and that could get him into trouble in the long term."

By acting as if he hasn't noticed the problems resulting from his policies, the columnist says, Erdogan, attempting to present an image of strength, has only demonstrated his political weakness. "For the strong man Erdogan wants to make himself out to be, he is looking very, very weak right now."

Ultimately, the columnist slyly suggests, Turkey needs a partner in foreign policy. Brussels, he says, might be such a partner to Ankara, because it desperately needs Turkey's help to solve the migrant crisis. "For Turkey and the EU, this could be an opportunity for enhanced cooperation," Knipp concludes.