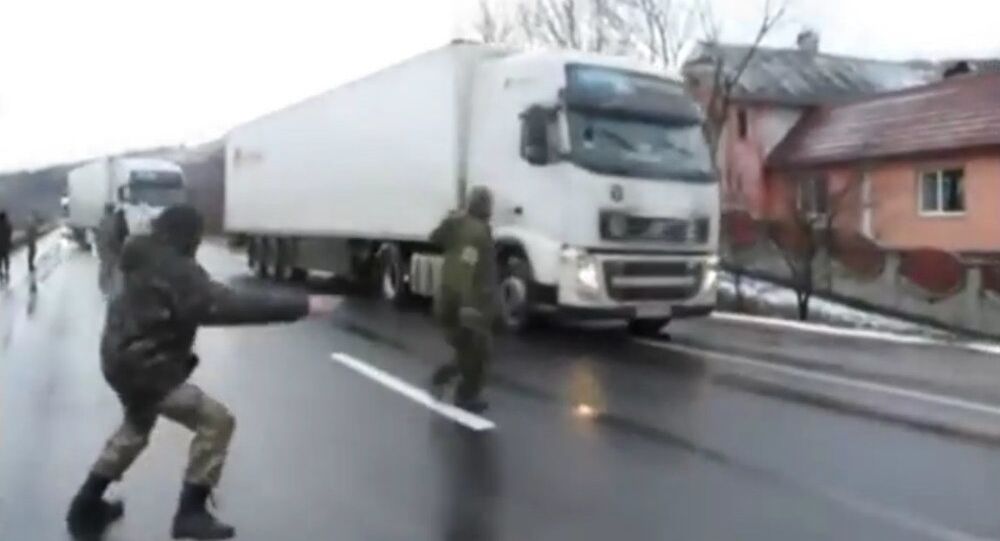 After the failure of the radical activist-inspired Crimean food and electricity blockades, and the non-starter of its proposed 'naval' component, Ukrainian nationalists have begun an attempt to block Russian transport trucks heading to Europe through Western Ukrainian territory.

Nationalist activists from the Western Ukrainian regions of Zakarpattia, Lviv and Volyn, as well as Rivne and Chernihiv in the north and southwest, have initiated a coordinated effort to block transport trucks with Russian registration numbers, and simply those carrying Russian-made goods, from crossing Ukraine's Western border into Europe.

The 'blockade' began Thursday near the village of Nyzhni Vorota, about 100 km northeast of Uzhhorod, Zakarpattia, where militant activists set up a checkpoint, preventing about 75 Russian trucks heading to Slovakia and Hungary via Kiev from going through.

"Ukrainian militants began a blockade against Russian trucks in Zakarpattia."​

On Friday, the initiative was joined by members of the Right Sector paramilitary group, who quickly dubbed the campaign the 'Bear Blockade.'

The campaign's organizers say that they will continue to block the passage of Russian trucks until Kiev officially recognizes Russia as an 'aggressor state' and bans transit on an official level.

​"From today, Russian trucks are being blocked in Volyn too."

Local law enforcement, meanwhile, is reported to be quietly 'monitoring' the situation, refusing to take action. Speaking to local media, Transcarpathian Region police press secretary Galina Sernivka denied that Russian-registered trucks are being stopped, and added that the campaign is taking place safely, and in compliance with the law.

Euromaidan Press "explains" the motivation for the blockade.​

© Photo : SE/ EAST NEWS
Poland, Russia Ready to Elaborate New Agreement on Freight
"It's noteworthy," independent Russian newspaper Svobodnaya Pressa writes, "that the nationalists unveiled their blockade on the day that Moscow and Kiev reached agreement on transit and exchanged temporary quotas." In January, countermeasures introduced by Moscow as part of a sanctions-countersanctions war with Kiev had prevented the transit of Ukrainian goods through Russia to Asia.

The Ukrainian activists' 'blockade' follows on the suspension of cargo transit between Russia and Poland. On February 1, Warsaw suspended the agreement, following a disagreement with Moscow on the number of licenses issued for bilateral cargo transport haulage. As a result, Russian trucks had begun using alternative routes, including through Ukrainian territory.

"Experts," the newspaper notes, "do not exclude the possibility that the Ukrainian nationalists are acting on the request of their 'Polish friends'. After all, the next round of negotiations between Moscow and Warsaw will be held on February 16, and the shutoff of virtually the entirety of freight traffic with continental Europe may very well be used as a bargaining chip."

Speaking to the paper, Semyon Uralov, chief editor of the Russian internet newspaper Odnako,  said that "the struggle against the Russian truckers is nothing more than an excuse to establish 'private' customs posts," in other words, a racket.

"We are dealing with the decomposition of Ukraine's statehood. The emergence of private customs offices is the first sign of this decomposition. It's worth remembering that the first such customs posts appeared in the Donbass [in Ukraine's civil war-torn southeast], where checkpoints controlled by various nationalist battalions were established to make money. Then the same thing began on the border with Crimea. All this was done under the guise of fighting a foreign enemy. But in actuality it is just a sign of the feudalistic fragmentation into which Ukraine is sinking."

© Sputnik / Sergey Pivovarov
Petty Move: Ukraine Trying to Block Russian Trade With Moldova
Kiev, Uralov suggested, may be unable to control the situation even if it wanted to. "I will remind you that authorities in Kiev had already attempted to clean out Right Sector in Zakarpattia last summer," (an event which resulted in a shootout between Right Sector militants and Ukrainian police). "The current situation is of the same order."

Ultimately, with Russian Deputy Transport Minister Nikolai Asaul saying of the Russian-Polish dispute that Russian trucks will be forced to charter ferries on the Baltic Sea to bypass Polish territory, Uralov suggested that Russia will also need to look for other ways to mitigate any effects of the makeshift Ukrainian 'blockade', including rail or container transport.

© Sputnik / Gennadiy Dianov
Just Try It: Crimean Blockade Organizer Vows 'Naval Blockade'
For his part, Sergei Khrapach, the chairman of the Russian Mezhregionavtotrans  trucking association, noted that in this case, Kiev is not responding to what is clearly unlawful activity. In this situation, he says, Russian authorities could use the legal instrument of 'retortion' to retaliate.

"Our government could send Ukrainian authorities a formal note of protest. If they do not react, as is almost certain, Russia will have the right to apply its own measures against Ukrainian carriers, which will encourage the start of a dialogue."

"Unfortunately," Khrapach noted, "Ukraine's leaders are prone to showing less and less common sense…Therefore, the situation is likely to develop along a negative scenario. In the end, consumers and producers are the ones who will pay for it all."