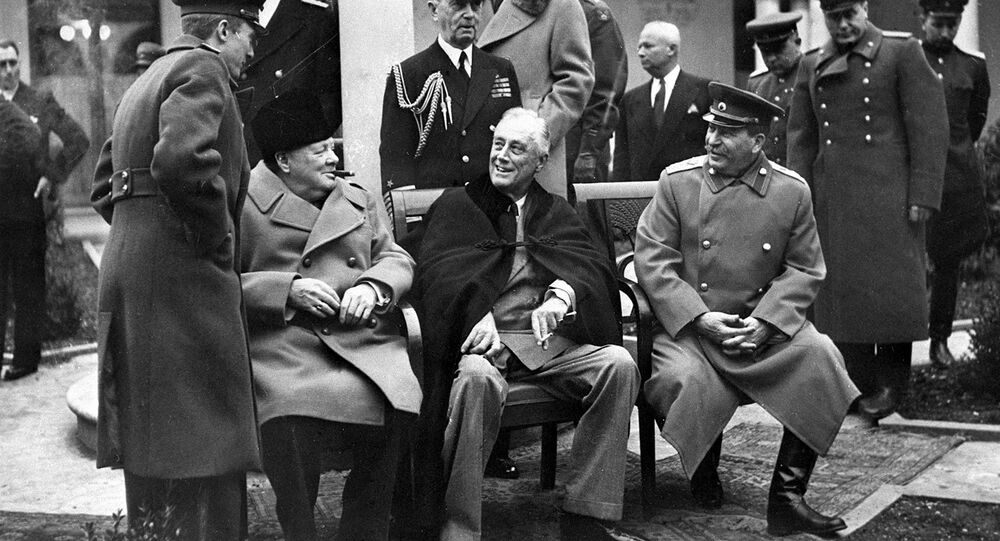 There’s Something About Stalin: Why West Still Reveres the Soviet Leader

There is no doubt that Joseph Stalin was a world class politician, Joseph Hancock, a member of the Party of Communists USA, noted in an exclusive interview with Sputnik; although the Soviet leader was presented as a "backward peasant" by the Western press, Stalin used this to his advantage, Hancock remarked.

On December 21, 1879 Joseph Dzhugashvili, the future Soviet leader Joseph Stalin, was born in the small town of Gori in the Tiflis Governorate (modern Georgia) of the Russian Empire.

Remarkably, Stalin, who had been at the helm of the USSR from the mid-1920s to 1953, still attracts a lot of interest from his supporters and antagonists not only in Russia but also in the West.

Why do Western people, particularly Americans, either criticize Stalin or pay their respect to the prominent Soviet politician?

There are many reasons why Joseph Stalin is the subject of heated debate among Americans.

"Firstly, Americans know that he is our 'Uncle Joe,' because of his friendship with President Roosevelt and their collaboration in defeating the Nazis in WWII. The interest exists because there is a mystique about Stalin. Americans are fascinated by it. Perhaps it is his name, translated to mean, 'the man of Steel.' A super hero. Mostly the interest in Stalin comes from the quote by former General and US President Eisenhower that 'the Soviets will be destroyed in six weeks.' Of course that did not happen," Joseph Hancock, a member of Politburo and Central Committee of the Party of Communists USA, elaborated.

© Sputnik / Shagin
Holodomor Hoax: The Anatomy of a Lie Invented by West's Propaganda Machine
However, due to the Cold War propaganda campaign and the rise of the Trotskyist movement Western media sources and US scholars even went so far as to compare Joseph Stalin to Adolf Hitler, the infamous Nazi leader, according to the American political activist.

"Then the question arises, 'if Stalin was such an evil man, why did all the workers and peasants fight under him to win WWII?" Joseph Hancock asked rhetorically.

"As for the 'great terror' or Yezhovshchina we understand that most of this occurred without Stalin's knowledge, and was carried out in the Moscow oblast by Nikita Khrushchev and those First Secretaries of the CPSU for their own personal reasons…  It is our understanding that Stalin and [Lavrentiy] Beria were responsible for bringing the 'great terror' to an end," the American political activist noted.

The "Yezhovshchina" (dubbed after Nikolay Yezhov, the NKVD chief) was the period of the "great terror" of 1937-38 in the Soviet Union. Yezhov organized a series of severe repressions against the Soviet people. In 1939 the infamous NKVD chief was executed for atrocities and anti-government conspiracy.

© AP Photo
The Munich Betrayal: How Western Powers 'Sold' Czechoslovakia to Hitler
According to Hancock, one the most the most controversial political decisions and maneuvers of Stalin's was the Molotov-Ribbentrop pact inked between the USSR and Nazi Germany on August 23, 1939. It should be noted that the Kremlin's decision to conclude such a deal with Germany was made after major European powers, most notably Britain and France, signed similar non-aggression agreements with Adolf Hitler.

"This agreement was not well understood by left wing people in the United States. They felt betrayed knowing that the agreement had been signed, but without that agreement, nothing would have been prepared when it came time for the USSR to fight against the fascist menace," he stressed.

"Signed before Soviet Union was attacked on June 22, 1941, this non-aggression agreement gave the USSR time to set up its defenses and to build necessary weaponry. One of the greatest inventions of the war was the T-34 tank. Tractor factories were turned into T-34 manufacturing assembly lines," Hancock explained.

Due to the Molotov-Ribbentrop Pact which postponed the German advance against the USSR, the designers of the famous Ilyushin Il-2 Sturmovik warplane got an opportunity to finalize their work and bring the aircraft into production. By the time of the German Blitzkrieg 249 Russian ground-attack aircraft had already been built. During the Second World War Soviet factories produced almost 42,330 of the Il-2 and the Il-10 military jets.

"Stalin took nothing for granted. He signed the non-aggression pact knowing full well that the Nazis would break it… This is what Stalin was best known for, but there were many other critical political decisions that he made under the most difficult of conditions," Hancock emphasized.

"There is no doubt that Stalin was a world class politician," the American political activist continued, "But like all communist leaders, he was never seen as such by the bourgeoisie that controlled the media. [Franklin D.] Roosevelt, [Harry S.] Truman, and [Winston] Churchill are seen as sophisticated, while Stalin is presented as a backward peasant. He used this to his advantage."

Russian historians admit that the Anglo-Saxon nobility had many times dealt a severe blow to Russia's geopolitical interests. Can we say that Joseph Stalin and his team had repeatedly outmaneuvered wily Western politicians?

"There is no doubt that Joseph Stalin outmaneuvered wily Western politicians, except in one instance," Hancock told Sputnik.

"In the United Nations, the Soviet delegation walked out of the UN Security Council which allowed the United States to bring in UN Security Forces into the Korean conflict [25 June 1950 — 27 July 1953]. Had the Soviets stayed and argued a little longer, they could have prevented the UN Peace Keeping Forces from entering the conflict, and the North Korean forces could have maintained their position in Korea," he narrated.

"As things turned out, the UN Peace Keeping forces and United States under the command of General Douglas MacArthur were able to push back the North Korean offensive to the 38th parallel where Korea remains divided to this day. Had the Soviets stayed at the UN Security Council, the situation would have turned out differently, possibly resulting in a united Communist Korea," Hancock stressed.

© East News / USA/Science Photo Library
Post WW2 World Order: US Planned to Wipe USSR Out by Massive Nuclear Strike
But what about Stalin's famous nuclear project? Did this initiative escalate further tensions in the post-WW2 world? Or had it preserved the balance of power in the world for decades?

"He [Joseph Stalin] knew that the US was developing nuclear weapons with the help of former Nazi scientists and that the US used them two times on Japan when it was completely unnecessary. Japan was already defeated and prepared to surrender to the Red Army and Navy. So Stalin knew that he had to have parity. The Soviets always sought parity for self-defense. They never had a first strike policy," he pointed out.

"As for increased tensions, the nuclear arms race actually reduced tensions in my opinion. As long as the USSR had parity with the USA, there would be no conflict," Hancock stressed.

According to the member of the American Communist party, once the USSR was destroyed the US gained complete hegemony over the entire world and now remains an unchallenged superpower. The national liberation movement promoted by Lenin and Stalin has been thwarted.

"I only hope that Mr. Putin has enough political conviction and gumption to take on the United States and save the world from WWIII!" Hancock remarked.

© Wikipedia
Who Controls the Past Controls the Future: Why Does West Hate Stalin?
"Western mainstream historians are still afraid of the return of communism and the USSR. They are still very much afraid of the return of Stalinism (read that Leninism) which is proletarian internationalism. They like things just fine the way that they are. They make millions of dollars writing what amounts to fantasies for television about the bad old Cold War," the American political activist told Sputnik.

"We don't bother to watch or read them anymore. We prefer to read the foreign press like RT that doesn't get so involved in anti-Sovietism (anti-Stalinism). Most Americans are amazingly ignorant about world affairs. Occasionally, an old timer will surface that remembers what it was really like during Stalin's time," Joseph Hancock underscored.

A lot of controversy still surrounds the Stalin era and "there are as many opinions as there are experts" as Franklin D. Roosevelt used to say.

"I am not impartial about discussions of Stalin," Joseph Hancock, a member of the Party of Communists USA, stressed in a conversation with Sputnik.