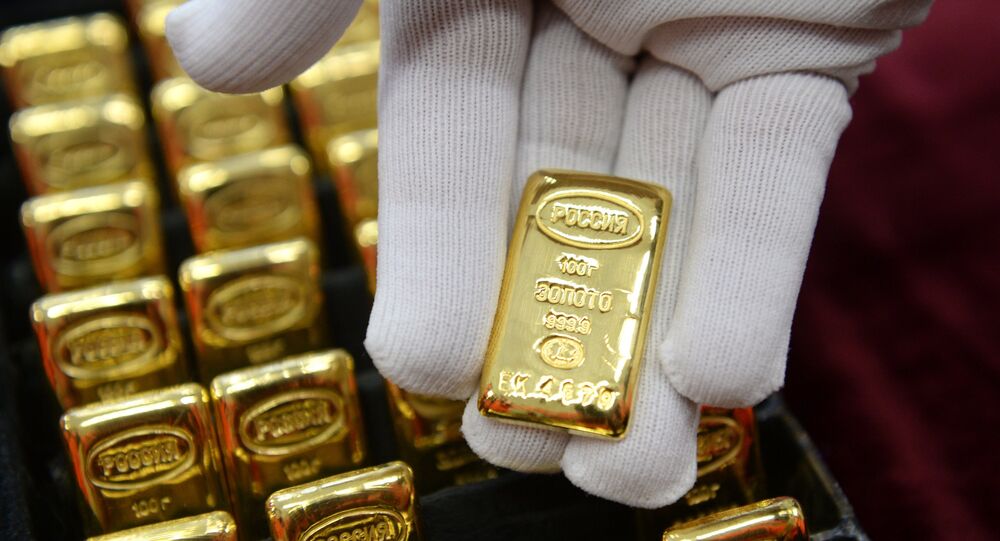 A gold-backed ruble and gold-backed yuan could start a 'snowball exit' from dollar F. William Engdahl notes, adding that it will diminish America's ability to use the reserve dollar role to finance Washington's perpetual overseas wars.

© CC BY 2.0 / Bullion Vault / gold bar on coins
Plunge in Prices Renders 50% World's Gold Output Unprofitable
The irony of the situation is that the central banks of China, Russia, Brazil and other countries "diametrically opposed" to US foreign policy course are forced to stockpile dollars in the form of "safe" US Treasury debt in order to protect their economies, American-German researcher, historian and strategic risk consultant F. William Engdahl stresses.

The truth of the matter is that the role of the US dollar as the world's major reserve currency is the countries' economic Achilles Heel, the strategic risk consultant elaborates.

At the same time, by buying US Treasury debt in dollars, they are de facto financing Washington's "endless" overseas military operations.

Fortunately, "[t]hat's quietly changing. In 2014 Russia and China signed two mammoth 30-year contracts for Russian gas to China. The contracts specified that the exchange would be done in Renminbi [yuan] and Russian rubles, not in dollars. That was the beginning of an accelerating process of de-dollarization that is underway today," Engdahl writes in his article for New Eastern Outlook.

© Sputnik / Alexei Druzhinin
Daesh on the Run: Putin's Decisiveness the Key to Russia's Success in Syria
The researcher points out that on November 27 Russia's Central Bank reported that it has included the Chinese Renminbi (yuan) into its official reserves for the first time.

Furthermore, in August 2015 Russian currency traders bought almost 18 billion yuan and only 3 billion US dollars. It is obvious that Russia is gradually increasing the use of the yuan in Russian financial markets, substituting it for the US dollar.

"But the actions of Russia and China to replace the dollar as mediating currency in their mutual trade, a trade whose volume has grown significantly since US and EU sanctions in March 2014, are not the end of it," the researcher remarks.

According to Engdahl, there are clear signs showing that gold "is about to make dramatic return to the world monetary stage."

And it's not all good news for Washington.

While it is believed that the US Federal Reserve holds about 8,133 tons of gold, the rumors circulated that things are not what they seem and "the gold chamber of Fort Knox" are nearly empty, Engdahl narrates.

Adding more fuel to the fire are doubts surrounding US' official gold statistics, a strange event occurred in 2012.

"In 2012 the German Government asked the Federal Reserve to return German central bank gold 'held in custody' for the Bundesbank by the Fed. Shocking the world, the US central bank refused to give Germany her gold back, using the flimsy excuse that the Federal Reserve 'could not differentiate German gold bars from US ones…' Perhaps we are to believe the auditors of US Federal Reserve gold were laid off in the US budget cuts?" the researcher asks.

Meanwhile, Moscow and Beijing are boosting their gold holdings steadily.

Engdahl emphasizes that from January 2013 Russia's official gold reserves increased by 129 percent to 1,352 tons as of September 30, 2015, adding that during "the dark Yeltsin years" of the 1990s Russia's golden vaults contain only 343 tons.

"Russia now holds as many ounces of gold as the gold exchange-traded funds (ETFs) do," he stresses.

According to the researcher, Russia and China are decisively paving the way for the world economy de-dollarization.

"A Russian-Chinese alternative to the dollar in the form of a gold-backed ruble and gold-backed Renminbi or yuan, could start a snowball exit from the US dollar, and with it, a severe decline in America's ability to use the reserve dollar role to finance her wars with other peoples' money," Engdahl concludes.