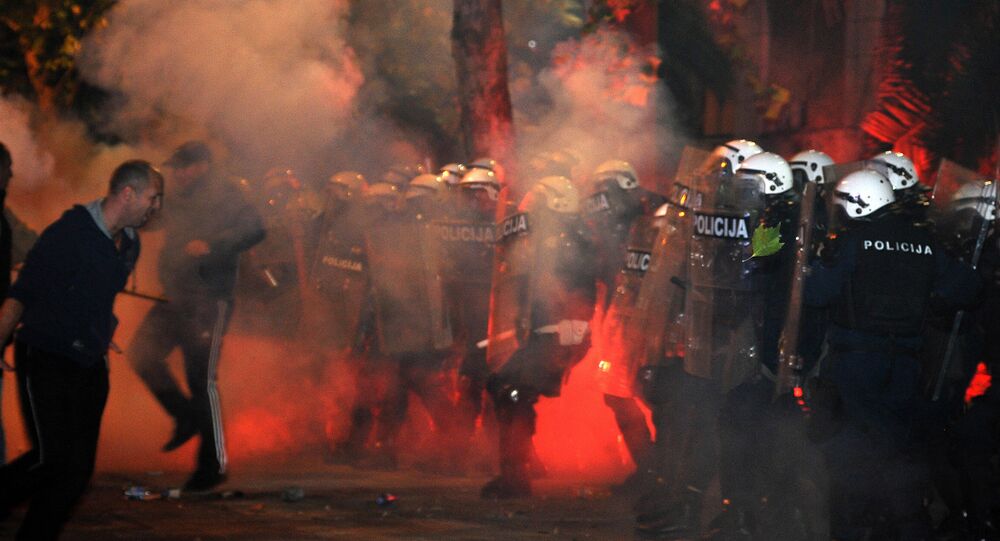 The Montenegrin government's apparent decision not to hold a referendum ahead of the country's bid to join the North Atlantic Alliance seems to demonstrate that, with society heavily divided on the issue, the country's leaders are simply afraid that an expression of popular will might upset their plans.

With an 'ideological war' being waged in the small Balkan nation of 620,000 over the last several months, city streets across the country have been turned into a battlefield between the government and pro-democracy, anti-NATO demonstrators. Now it looks as though the government of Prime Minister Milo Djukanovic will avoid risking a referendum on the issue.

​Ironically, the Montenegrin government's official Twitter account cited the prime minister as saying that Wednesday's decision was a "historic day…the most important after the 2006 referendum," (in which voters narrowly chose to secede from Montenegro's union with Serbia).

PM Đukanović: This is a historic day for #Montenegro. The most important after the 2006 referendum. pic.twitter.com/kT9bnUYxh7

In September, the US announced that it would be extending an invitation for Montenegro to join the bloc in December, prompting mass anti-government protests by tens of thousands of people demanding that their country stay out of the US-led military bloc.

With the government launching a well-funded PR campaign, using the motto "Partnership for a Secure Future," ordinary citizens countered with an improvised campaign in the streets and online to remind their fellow Montenegrins that 16 years ago, NATO had mercilessly bombed their country, which was then part of Yugoslavia, and that they could never feel at home in a defense organization which had attacked their country. Protesters also recalled NATO warplanes' gruesome practice of dropping over 15,000 tons of depleted uranium 'dirty bombs' on the country, which is said to have resulted in a surge in cancer rates.

In4s
Anti-NATO Poster countering the government's propaganda campaign: 'Partnership for an Uncertain Future - No to War, No to NATO'

#NATO used to bomb #Montenegro 16 years ago and now they accepted its membership in the #nato why now?? https://t.co/PhyedMRpYc

Speaking with Sputnik following the announcement from Brussels, Andrija Mandic, the leader of the conservative New Serbian Democracy Party and co-leader of the Democratic Front opposition coalition, emphasized that the Djukanovic government's move to join the alliance is not backed by popular will.

"It cannot be said that the official invitation by NATO is favorably accepted by the people of Montenegro," Mandic noted, "because judging by opinion polls, and just talking with the people, one finds that a majority is against membership in this alliance."

Noting that his party is against joining NATO because it would result in the alliance taking political control of the country, the politician noted that "as the opposition, we favor a referendum, but a just referendum so that the authorities don't falsify the results as they did with the previous elections."

© Sputnik /
NATO Way or the Highway
Ultimately, Mandic warned that "if the authorities try to bypass a referendum, the country will end up on the brink of a domestic conflict."

A spokesperson for Montenegro's Socialist People's Party (SPP), the country's second largest opposition party, echoed Mandic's sentiments, telling Sputnik that the project to join NATO is "obviously…a political project, and one which is not in the real interests of the people of Montenegro."

The SPP, in favor of entry into the European Union, is against NATO, convinced that in joining the military alliance, Montenegro stands to lose a great deal without getting anything in return.

The spokesperson emphasized that the SPP considers a referendum on accession absolutely essential. "The most important thing is that the decision on possible NATO membership must be brought before the citizens of Montenegro in a referendum. It is a very crucial issue, and ignoring the will of citizens could have grave consequences."

NATO's announcement, according to the spokesperson, was "the wrong decision," one which "will raise tensions in our country. Sending an invitation to Montenegro, a majority of whose citizens oppose membership in the North Atlantic Pact, is a direct aggression against the peace, stability and security of the citizens of our country."

Marko Milacic, the leader of the Movement for the Neutrality of Montenegro, told Sputnik that in inviting a country which does not have democratic elections and whose police beat up the opposition NATO has "shown its true face."

"NATO has shown that it is not concerned about the principles of democracy. This invitation by the alliance will only serve to once again destabilize Montenegro, exacerbating the contradictions in our society."

The incoming annexation (no referendum) of #Montenegro by #NATO could be the straw that breaks the camel. #StopNATO

The politically charged decision, undoubtedly influenced in no small measure by Moscow's historical friendship and strong economic and tourism ties with the Balkan country, has resulted in a flurry of commentary, many observers pointing to the shady, backdoor nature of the decision.

#Montenegro invited to join #Nato but without a peoples #referendum? #Democracy?https://t.co/FEAlvnEL3Q #Russia #Djukanovic

Speaking with Russia's Parliamentarskaya Gazeta, Viktor Kolobanovskii, the Director of the Balkan Center for International Cooperation, noted that opinion polling shows that up to two thirds of Montenegrins are against their country's entry into NATO, with 85% convinced that a referendum on the issue is necessary.

Petr Iskenderov, a senior analyst at the Institute of Slavic Studies under the Russian Academy of Sciences, believes that "it would have been difficult to choose a more inopportune moment" to attempt to "pull" Montenegro into NATO. Interviewed by Russia's RIA Novosti, the expert emphasized that "'pull' is the appropriate word here, because this decision, undertaken by the current ruling coalition, was not made on the basis of a referendum."

In the analyst's view, Podgorica has committed itself to a course which threatens to destabilize the country. Moreover, Iskenderov believes that it was Washington, not NATO's European members, which played the key role in forcing the decision.

"The Americans look on Montenegro as a potential outpost for their own military plans –this is an opportunity to hold the entirety of south-eastern Europe under control, and eventually, to create a US military base to add to the facilities already present in the region –from Italy, to Kosovo and Turkey," Iskenderov noted.

Reporting from Montenegro, Sputnik correspondent Vladimir Sudar emphasized that ultimately, "most people here do not want to slam the door on Russia, all the more so from someone wearing cowboy boots. Unfortunately, this is exactly what would happen in the event of the country's entry into an alliance…which exists only because Russia exists."

Commenting on NATO's decision for RIA Novosti, Aleksei Pushkov, the Head of the Russian Duma's Foreign Affairs Committee, emphasized that ongoing protests and the results of opinion polling have quite convincingly demonstrated that a referendum on NATO entry would fail to get the required majority.

"Speaking of an expression of the people's would not be appropriate here," the politician noted. "This is a matter of collusion between pro-American, pro-Western [elites] and elements of the elite of countries in Eastern Europe."

Pushkov lamented that in the midst of the threat of jihadist terror, which recently demonstrated its capabilities in the heart of Paris, "NATO is engaged not in the struggle with Daesh (ISIL), but with inviting Montenegro into the alliance, and strengthening its cooperation with Ukraine. In other words, it remains active first and foremost in the direction of Eastern Europe, keen on continuing its approach toward Russia's borders. Moscow, of course, cannot have a positive opinion of this kind of expansion, which will only have a negative impact on the situation in Europe as a whole."