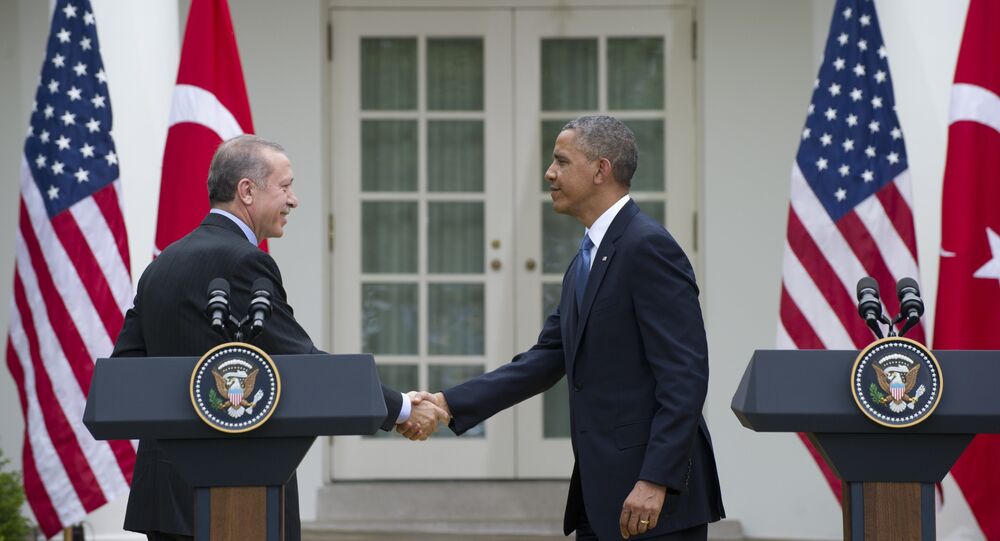 Turkey is a pawn in a NATO geostrategic game against Russia; Ankara has long been supporting ISIL on behalf of Washington, profiting from Syria's stolen oil, according to independent researcher and writer Timothy Alexander Guzman.

Independent researcher and writer Timothy Alexander Guzman underscores that Turkey's provocation against Russia "is not surprising at all," claiming that Washington's fingerprints are all over Ankara's recent provocation.

"Let's consider the facts. Syrian government forces along with Russia have turned the tide against ISIS [ISIL]. It is a known fact that the US, France, the UK, Turkey, Israel, Saudi Arabia and Qatar had been arming, funding, training or provided safe havens for ISIS at some point in time," Guzman writes in his article for alternative media site Silent Crow News.

© AFP 2020 / STR
Never Gonna Give Up? Saudi Arabia Says Military Option in Syria Still ‘Viable’
According to the writer it's the Turks who are controlling the situation on the ground under Washington's direction. Citing an unnamed Doha-based source, Guzman elaborates that there is a "triangle, with Turkey at the top and Saudi Arabia and Qatar at the bottom." Turkey is the main coordinator in this clandestine triple alliance.

Ankara insists that it shot down Russia's Su-24 bomber because it allegedly violated Turkish airspace.

"One important fact to consider is that Turkey had in place a 'buffer zone' five miles inside Syria since 2012," Guzman emphasizes.

The writer explains that Turkey unilaterally created the buffer zone after a Syrian defense missile shot down a Turkish fighter aircraft that intruded in the Syrian airspace in 2012. Turkey redrew its state border and is now claiming that the Su-24 had violated it.

However, Ankara has not been acting alone. The action was mostly likely preplanned by Turkish policymakers and coordinated with Washington, which seek to disrupt Russia's success in Syria, the writer believes.

"Turkey has supported ISIS [ISIL] on behalf of Washington's strategic goal to oust Assad and has been profiting from Syria's stolen oil. Turkey follows the dictates of Washington. Turkey shot down a Russian SU-24 to provoke Russia into a war with NATO who is under Washington's control. It is certain that Turkey got its green light from the Obama administration," Guzman underscores.

© AP Photo / Selcan Hacaoglu
Turkey's Grand Game: Three Reasons Behind Su-24 Downing
The writer reminds that it is not the first time the Turkish leadership has carried out an act of aggression. Back in 1915, the Ottoman Empire unleashed a horrific Armenian genocide that claimed the lives of about 1.5 million Armenians, as well as Assyrians and the Ottoman-Greeks. The Turkish government has also been involved in massacres of Kurdish nationals since the beginning of 20th century.

In 1974, Turkey invaded Cyprus in the wake of the Cypriot coup d'état and grabbed about 40 percent of the island's territory.

"What was the reason behind Turkey's invasion? To restore the constitution of the Republic of Cyprus that was dismantled by the coup plotters and for the protection of the Turkish-Cypriot minority on the island, which was less than 18% of the population," Guzman notes.

However, in reality the coup was only a pretext to justify Ankara's illicit invasion, he underscores.

It seems that Ankara wants to re-establish a mini-Ottoman Empire and it has no scruples about harboring ISIL's barbaric hordes while pursuing this goal.

In contrast to Russia, Ankara is clearly on the wrong side of history, Guzman stresses, adding that the Turkish government "should reconsider its foreign policy that could drag its nation into World War III orchestrated by Washington."