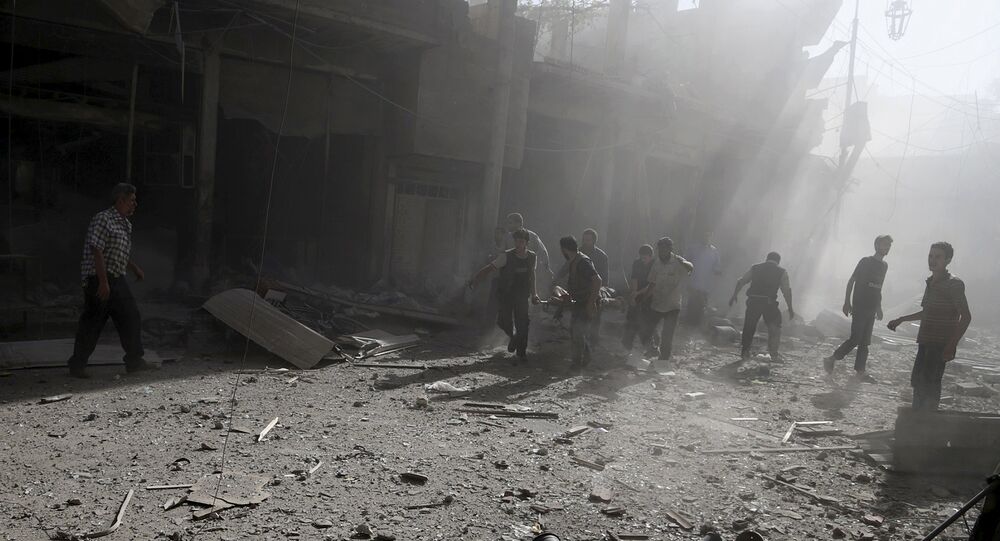 The Syrian civil war and the Ukrainian coup of 2014 are parts of one and the same "energy war" game started by the Western political and financial elite, US political analyst Phil Butler told Sputnik, adding that Georgia is the central piece in this game.

Both the Syrian civil war and the Ukrainian coup are actually two sides of the same coin — both are used by Western political and financial elites in their grand "energy war" game, political scientist and expert on Eastern Europe Phil Butler notes.

"This is absolutely the case, as we can clearly see. The same methodology is present not only in the Ukraine-EU-NATO intervention, and in the CIA-Ossetia-Georgia-NATO strategy, but in the current situation in Syria as well," Butler told Sputnik.

© Flickr / SaltGeorge
Western Banking Elite Stepping In to Seize Ukrainian National Wealth
Georgia is playing a crucial role in the game, the expert emphasized. Conflicts which erupted in the post-Soviet space in the recent years are deeply interrelated.

"It is no coincidence that Georgia's highly controversial ex-president is now in charge of Odessa. In the days and weeks to come we will see more clearly this new Cold War against Russia played out. Look for the "West" to attempt to reinstall Odessa's Governor, Georgian Mikheil Saakashvili in power in Tbilisi. Just this afternoon Sputnik reported the mayoral election documents being seized by police in Ukraine. There's more to come, I assure you," the political scientist underscored.

But what is the cornerstone of the new Cold War game? Is it all about natural gas routes?

"The so-called "New Cold War" is not completely about "gas", but it is about what natural resources can buy. Ukraine as a transit or supply route for Russian or any gas from the East, this does play a vital role. However important we make Ukraine or Syria though, it is Georgia that is the central piece in this "energy war" game," Butler pointed out.

© AP Photo / Alexander Kots
Evidence of Things Unseen: US-Led Coalition Has Something to Hide in Syria
"The equation is fairly simple actually. Russia and to a lesser extent Iran, have both been curtailed and held back for decades, via sanctions and other methodologies. They were held back by the so-called West. This is not rocket science. Now the key variables come totally into view thought. Discoveries only recently of the sixth largest natural gas field on Earth, in Georgia, tell us where all the conflict comes from. Russia, along with Iran, and especially with these new Georgia deposits found, control more than 50% of the remaining gas reserves on Earth. This says nothing about other resources. I think anybody with any common sense at all will follow these facts to the truth," the expert elaborated.

Meanwhile, some experts say the Russian military operation in Syria can be used by NATO war strategists to drive a wedge between Ankara and Moscow. And here it is seemingly "all about natural resources" again. On December 1, 2014 Russian President Putin announced the proposed Turkish Stream project — an alternative to the South Stream, which was earlier downplayed and undermined by both Washington and Brussels.

Is it possible that a potential political confrontation between Moscow and Ankara over Russia's Syrian airstrikes could ruin the Turkish Stream project?

"I think Russia's (Putin's) play in Syria is perfect by design. If Turkey does not fall in line with Russia and Iran, the so-called "South Stream" will pass that nation by. Look at it this way, Syria, Iraq, Iran, Russia and probably the entire Caucasus region… why does anybody need Turkey in that geo-strategy?" Butler noted with a touch of irony.

© Sputnik / Dmitriy Vinogradov
Syrian Saga: Russian Airstrikes 'Spread Panic Among Terrorists', Demonstrate Army's Capabilities
By now, both the Washington-instigated Ukrainian regime change and the Syrian turmoil have not borne the fruit Western politicians were expecting. Russia's economy is up and running, Moscow is establishing new alliances and deepening the existing ones, the country is gaining considerable prestige globally despite the anti-Russian propaganda campaign.

What other political or economic instruments could the Western elite use against Russia?

"Washington and London have very few options left, in my opinion," Butler underscored.

"I fail to include Frankfurt or Rome in this because both of those centers will fall in line with whoever they see as the winner in this energy war. Washington and her cohorts can continue to print bribe money to incite revolution. Or, the smart players underneath this game can come to terms with one undeniable fact. Russia sits on all the cards… When the world needs energy 50 years from now, guess where they will get it from? I'll give you a hint, it won't be from a fracked out oil well in Texas. It's time our nations began thinking about truly sustainable energy, and truly sustainable peace," the political scientist told Sputnik.

"But I am sure the dinosaurs in think tanks in the West will still puff their cigars, in their leather chairs, among all those law books, and push some more of the same buttons for a while. As for Mr. Putin, he and his advisers have so far done the best anybody could for their people," Phil Butler stressed.

No, Thanks! Iraq Rules Out Need for US Ground Operation