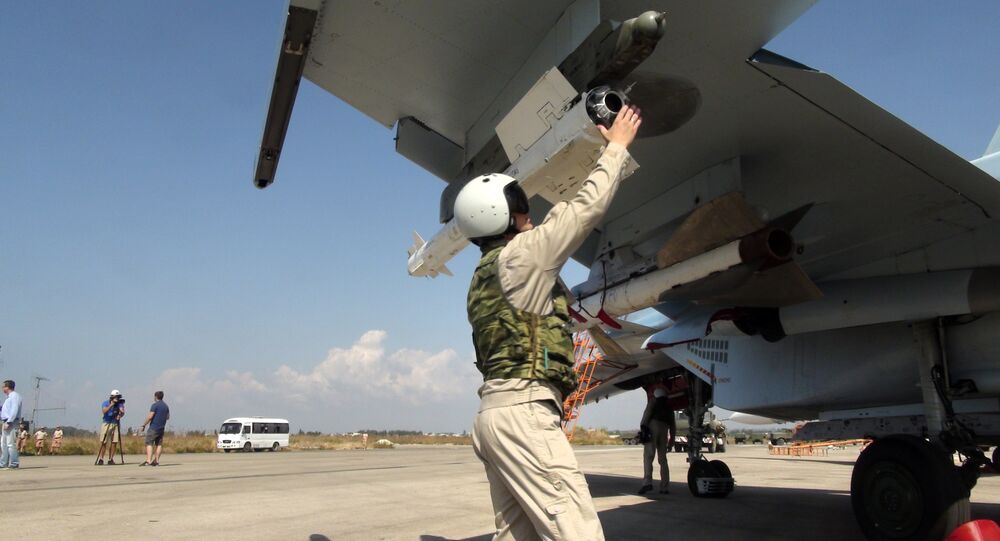 "The Russian intervention has exposed the fraud of the US' position in the Middle East and shown the world that Washington lies, that she supports the very terrorists who allegedly were behind the September 11, 2001 attacks in New York and at the Pentagon," Engdahl pointed out in his article for New Eastern Outlook.

According to the historian Russia is about to put an end to the US-led "new world order" proclaimed by triumphalist President George H.W. Bush on September 11, 1990.

"That new order, as is clear today, is one of war, killing, chaos, hate and vengeance, negativity everywhere in the world where there is positivity. It's very much the history of the forty so years since Bush was Director of the CIA, and put much of those developments into motion starting with the 1991 US invasion of Iraq [Operation Desert Storm]," Engdahl stressed.

The historian narrated that after the collapse of the Soviet Union the United States quickly adopted the winner-takes-all-approach in its foreign policy. It was clearly demonstrated by the so-called 'Wolfowitz Doctrine' — a new strategic post-Cold War policy of Washington.

"America's political and military mission in the post-Cold War era will be to insure that no rival superpower is allowed to emerge in Western Europe, Asia or the territory of the former Soviet Union," the doctrine stated.

© Sputnik / Aleksey Nikolskyi
A Leader of the Same Caliber as Putin Desperately Needed in US – US Analyst
"We will retain the preeminent responsibility for addressing selectively those wrongs which threaten not only our interests, but those of our allies," it read.

The Doctrine became an official policy under US president George W. Bush after September 11, 2001 tragedy.

Engdahl underscored that the policy justified "pre-emptive" US military strikes as well as US promotion of regime change in nations around the world unwilling to bow before Washington.

In light of this, Russia's decision to step in in Syria has dealt a severe blow to the famous 'Wolfowitz Doctrine' and shifted the global balance of power.

"The Russian military intervention into Syria, which began at the end of September, appears likely able to deal a devastating blow or defeat to the armies of ISIS [ISIL], al-Nusra/al-Qaeda in Iraq and Syria and other Islamic terror groups that have been euphemistically defined by Washington as 'moderate opposition' to Bashar al Assad. De Facto this intervention spells the end of the Wolfowitz Doctrine. Russia has called Washington's bluff in Syria with its military actions," the historian emphasized.

"Russia has accepted what I consider an awesome responsibility," Engdahl noted, asking: What will be Russia's next move?

© AP Photo / Hadi Al-Abdallah
US War in Syria, Iraq Part of Bigger Plan Aimed Against Iran and Beyond
After exposing Washington's dirty double game in the Middle East and smashing terrorists in Syria, Russia should go further, promoting independence from the Bretton-Woods' "dollar" order.

In order to accomplish such a task, Moscow should push ahead "the re-sovereignization of the Russian Central Bank as a state institution, so that the Russian State is able to issue sovereign money, without looking over its shoulder to what Wall Street and US hedge funds and their corrupt rating agencies think," the risk strategic consultant underscored.

Together with the Eurasian Economic Union partner countries, with the Shanghai Cooperation Organization partner countries, with the BRICS partners and the emerging group of nations in the Middle East, Russia is likely to not only deal a blow to US-bred terrorists in Syria, but also "to transform the foundations of world economic stability by understanding the true possibilities she has to end the tyranny of debt slavery by private Western banks and their central banks of the dollar system."

"It is an awesome responsibility Vladimir Putin and the Russian state accepted when they accepted President Assad's request to aid his war on terror," Engdahl highlighted.