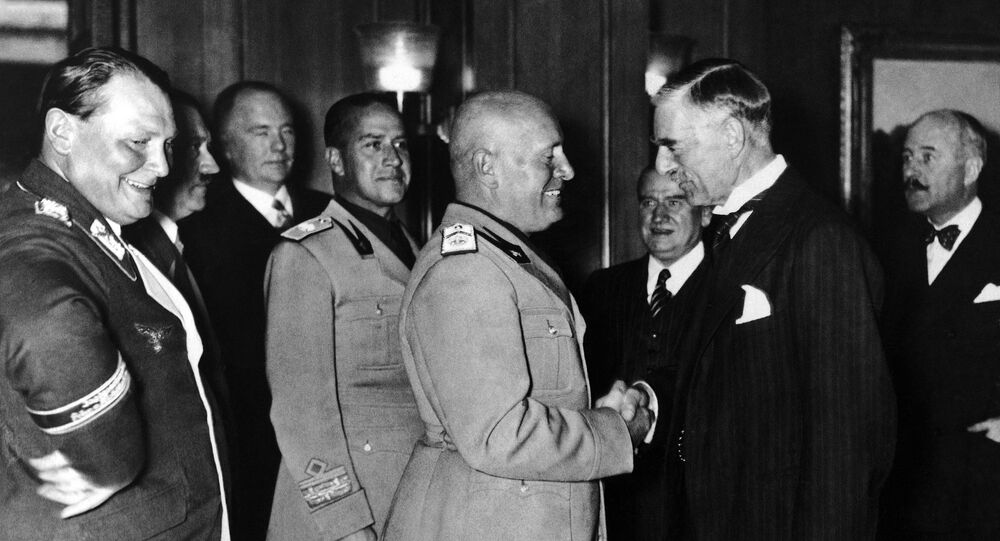 © AP Photo
The Munich Betrayal: How Western Powers 'Sold' Czechoslovakia to Hitler
The Munich Agreement inked in the early hours of September 30, 1938 by Britain, France, Italy and Nazi Germany (excluding the USSR and Czechoslovakia) opened the doors to Hitler's aggression and marked the actual beginning of the Second World War.

In accordance with the agreement, Nazi Germany was permitted to seize the so-called "Sudetenland" — northern and western parts of Czechoslovakia inhabited predominantly by German speakers.

Earlier, on May 19-20, German military forces started to concentrate on Czechoslovak borders, prompting a partial mobilization in the country. Hitler's intentions were crystal clear to European powers. However, they were unwilling to help the Czechoslovak government which faced Germany's blatant aggression.

The Munich Agreement Handed Over Czechoslovakia to Hitler

On July 20, French Foreign Minister Georges Bonnet informed the Czechoslovak minister Stefan Osusky that "France will not make war for the Sudeten affaire… The Czechoslovak government must understand that France as well as England will not go to war. It was important above all that matters should be clear" (Michael J. Carley "'Only the USSR has… Clean Hands': the Soviet Perspective on the Failure of Collective Security and the Collapse of Czechoslovakia, 1934-1938").

The Czechoslovak government was literally coerced into submission by Britain and France.

On September 15, British Prime Minister Neville Chamberlain met with Adolf Hitler in Berchtesgaden to negotiate the cession of Czechoslovakia's territories. Three days later, there was a meeting between Hitler and French Prime Minister Edouard Daladier regarding the same issue. Needless to say, no Czechoslovak representatives were invited to the negotiating table.

"The Munich Agreement actually did what the liars claim the Molotov-Ribbentrop Pact did but in reality did not do. The Munich Agreement handed over a country to Hitler. Moreover, the Allies did so without even asking the Czech government or President! Poland was complicit in this. [Warsaw] took the Teschen area, heavily industrial and with a minority Polish population. Winston Churchill compared Poland to a "jackal", snapping up some morsels while the "lions", the Great Powers, divided up the big prize. In 1939, when Hitler took the rest of Czechoslovakia, the Bank of England gave Hitler the Czech gold reserves!" US expert in Soviet history Professor Grover Carr Furr of Montclair State University told Sputnik.

© Wikipedia
Who Controls the Past Controls the Future: Why Does West Hate Stalin?
Czechoslovakia was really a "big prize" for Hitler: the country boasted a highly-developed military industry and had a 40 percent share in the world's arms market. Czechoslovakia's ten major military factories could produce each month 1,600 mounted machineguns, 3,000 light machineguns, 130,000 rifles, 7,000 grenade launchers, and hundreds of other weapons, including tanks and warplanes.

After grabbing the rest of Czechoslovakia, Hitler obtained its enormous military arsenal. So far, by allowing Hitler to annex Sudetenland and not raising a finger when the infamous Fuhrer occupied the whole territory of Czechoslovakia, Western powers provided the aggressor with the unique defense industrial base.

"So why? I think it is clear. The UK and France wanted to tell Hitler that he could move to the East and they would do nothing. Remember that when Poland was attacked, September 1, 1939, the British and French did nothing, despite their agreements to help Poland.  They did nothing until May 1940, when Hitler attacked them!" Furr underscored.

'Munich' Was an Attempt to Encourage Hitler to Attack the USSR

"Munich was definitely an attempt to encourage Hitler to attack the USSR. It cannot be interpreted any other way since, as you say, the USSR was excluded [from the Munich negotiations]. Certainly the British and French knew that the Soviets would understand it that way, and they didn't care. Probably the idea was that Germany, Poland, and Japan would all attack the USSR — that at least would have been the best result for the British and French governments," the professor highlighted.

© AP Photo
Untold Story of Molotov-Ribbentrop Pact: Why USSR Inked Non-Aggression Treaty With Hitler
Indeed, besides Nazi Germany, Japan and Poland also planned to expand their "Lebensraum" ("living space") at the expense of the USSR. Up till the beginning of 1939, Warsaw was considering joining Nazi Germany in a war against the USSR in order to seize more territory, Furr noted in his book " "Blood Lies: The Evidence that Every Accusation Against Joseph Stalin and the Soviet Union in Timothy Snyder's Bloodlands Is False," citing Nazi Foreign Minister Joachim von Ribbentrop, who reported in January 1939: "I then talked to M. Beck [Polish Foreign Minister Josef Beck] once more about the policy to be pursued by Poland and Germany towards the Soviet Union… M. Beck made no secret of the fact that Poland had aspirations directed toward the Soviet Ukraine and a connection with the Black Sea…"

On the other hand, after the occupation of Manchuria in 1931, Japan turned its interests toward the eastern territories of the USSR. In May-August 1939 Japan, the USSR and Communist Mongolia were involved in a direct military conflict at Khalkhin-Gol. The Japanese were defeated and temporarily gave up plans to attack the Soviets.

"The USSR was fighting a serious war with Japan at Khalkhin-Gol, in Mongolia. There is no question that the Japanese attack was intended to make the USSR fight "on two fronts" — IF it were successful. But it was not successful. Why not? Because the military conspirators in the Far Eastern Army had been removed and arrested, including Marshal [Vasily] Bliukher. If the conspirators had not been stopped they would have aided Japan, and the USSR would have had a two-front war. Remember that it was Siberian troops who, freed up by the peace with Japan, were rushed to the defense of Moscow, and then later to the defense of Stalingrad," the academic told Sputnik.

Britain was well informed of the militarist plans of Germany, Japan and Poland. Citing British archival documents, Canadian author and researcher Clement Leibovitz noted that British Prime Minister Neville Chamberlain regarded the Soviet Union as "a country which is likely to be the target of German aggression — possibly with Poland's help — and of a Japanese aggression" ("The Chamberlain-Hitler Deal," 1993).

The Munich Agreement a Product of Cynical Collaboration?

It is naïve to believe that the Munich Agreement was a product of an irresponsible "appeasement" of Nazi appetites by the British and French governments, Leibovitz noted, presenting evidence that could have rather been a product of cynical collaboration.

"I affirm that Chamberlain faced the option of either successfully preventing, and later resisting, Germany's policy of aggressive expansion, or allowing Germany to expand in Eastern Europe. Chamberlain was certain that Germany would end up declaring war against the Soviet Union. Motivated by anti-communism, he chose the second option though, and in doing so, he was gambling with Britain's security… Furthermore, it can be established that the deal was not a sudden policy but was the crowning of incessant efforts to encourage Japan and Germany 'to take their fill' of the Soviet Union," Leibovitz wrote in his book "The Chamberlain-Hitler Deal."

© East News / USA/Science Photo Library
Post WW2 World Order: US Planned to Wipe USSR Out by Massive Nuclear Strike
Remarkably, in his letter to King George VI written on September 13, 1938 Chamberlain remarked that "Herr Hitler has made up his mind to attack Czechoslovakia and then to proceed further East." Inexplicably, in the same very letter Chamberlain asserted to the king that "Germany and England… [are] the two pillars of European peace and buttresses against communism."

Furr pointed out that in his opinion, the Soviet Union and Joseph Stalin "were lucky that the British and French rejected "collective security"."

"Why? Because the British and French would probably have violated any such agreement. They probably would not have attacked Germany when Germany invaded Poland, even if they had agreed to do so. But why did they do so? And why did they not attack Germany when Germany attacked Poland? The only answer is: British and French governments wanted to continue to signal to Hitler: "Move East, and we won't harm you!" the professor stressed.

"Remember," Furr emphasized, "Britain and France were trying to send a force to fight the USSR on the side of Finland during the Russo-Finnish War of 1939-1940. They could not do so, but they had it all planned. So, while they were formally at war with Germany but not doing any fighting, Britain and France were sending aid, and planning to send forces, to fight on the side of Finland, an ally of Germany's against the Soviet Union, which was anti-German!"

"All in all, the USSR was the only country that acted not just honorably, but also intelligently, in World War II. The Soviet Union saved Europe from Nazism," Professor Furr concluded.