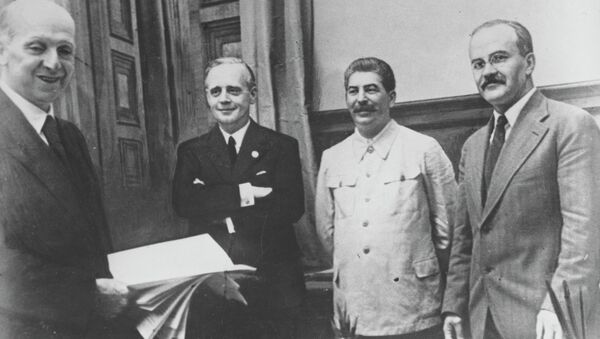 Ekaterina Blinova
All materialsWrite to the author
The Molotov-Ribbentrop pact, inked by the USSR and Nazi Germany on August 23, 1939, is now used by Western "experts" and mainstream media to accuse the Soviet Union of "colluding" with Hitler and "betraying" his would be French and British allies, but evidence suggests otherwise.

Putin: The Soviet Union Was Left All Alone Against Nazi Germany
On August 23, 1939 the USSR and Nazi Germany singed a Treaty of Non-aggression, also known as the Molotov-Ribbentrop Pact; the document still triggers fierce debate, prompting the West to accuse the USSR of "colluding" with Hitler on the eve of the Second World War.

Furthermore, since 2008 on this day European countries mark "European Day of Remembrance for Victims of Stalinism and Nazism."

"It's an annual event [August 23], anxiously awaited by western Russophobic propagandists, to remind us of the iniquitous Soviet role in starting World War II. Nowadays of course when the mainstream media say "Soviet," they want you to think about Russia and its president Vladimir Putin. Western "journalists" can't make up their minds about Putin: sometimes he's another Hitler, sometimes another Stalin," Professor Michael Jabara Carley of the University of Montreal emphasizes in an article for Strategic Culture Foundation.

Curiously enough, Western "experts" and mass media remain silent about the fact that most major European powers had signed similar treaties with Adolf Hitler earlier than the Soviet Union did.

The Grand Alliance that Never Was

For instance, Poland, the avowed "victim" of the Soviet-Germany non-aggression pact, had inked a non-aggression treaty with Nazi Germany on January 26, 1934.

"During the 1930s Poland played a spoiler's role. It was a far-right quasi-dictatorship, anti-Semitic and sympathetic to fascism. In 1934, as the USSR raised the alarm about Hitler, Poland signed a non-aggression pact in Berlin. Who stabbed who in the back?" Carley asked rhetorically.

While pointing the finger at the USSR for moving into territories of "Poland" (when no state of Poland existed any longer after German invasion of September 1, 1939) some Western historians are again demonstrating a peculiar form of amnesia, apparently forgetting that these very territories — Western Ukraine and Western Belarus — were annexed by Poland during the Polish-Soviet War (1919 — 1921). The war was unilaterally unleashed by Warsaw against the USSR, torn and devastated by the civil war.

In general, the USSR returned its own territories — with the exception of the small piece of Bukovina — that were grabbed by other European players during the chaos of the Revolution of 1917 and the Civil War of the 1920s, Russian historian, politician and diplomat Nataliya Narotchnitskaya noted in her book "Za Chto i S Kem My Voyevali" ("Who We Were Fighting and What For").

"Until 1939, Poland did all it could to sabotage Soviet efforts to build an anti-Nazi alliance, based on the World War I anti-German coalition of France, Britain, Italy, and in 1917 the United States… In 1934-1935, when the USSR sought a mutual assistance pact with France, Poland attempted to obstruct it," Carley emphasized. 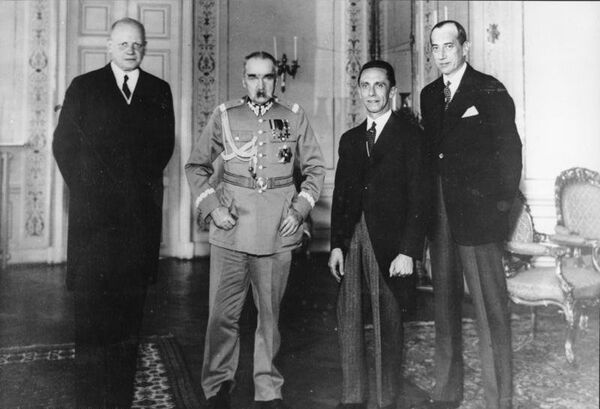 But what about Britain and France? Surprisingly, in the 1930s neither London nor Paris hastened to join the USSR's anti-German coalition. Carley pointed to the fact that it was Maksim Litvinov, the Soviet Commissar for Foreign Affairs, backed by the Soviet leader Joseph Stalin, "who first conceived of the 'Grand Alliance' against Hitler." However, "Litvinov's coalition became the Grand Alliance that Never Was."

British Fascism: Why British Nobility Hailed Adolf Hitler and Nazi Germany
Historians agree that European conservative elites viewed Adolf Hitler a less "evil" than Soviet Russia. Moreover, according to American economist Guido Giacomo Preparata, for the British and American establishment Nazism was seen as a driving force that could dismantle the USSR, thus far finishing what was started by World War I — complete dissolution of the former Russian Empire.

"To Churchill, [Stanley ]Baldwin [the UK's prime minister] would thus sum it up in July 1936: 'If there is any fighting in Europe to be done, I should like to see the Bolshies [Bolsheviks] and the Nazis doing it'," Preparata wrote in his book "Conjuring Hitler: How Britain and America Made the Third Reich."

Meanwhile European and American elites were not only unwilling to establish any alliances with the Soviet Union, but also poured money into Nazi Germany's economy, facilitating the rise of the Nazi war machine.

The Munich Betrayal of 1938

The final accord of this game was the Munich Agreement signed by the major powers of Europe (Britain, Germany, France, Italy) excluding the Soviet Union and Czechoslovakia, on September 30, 1938, that permitted Nazi Germany to annex northern and western border regions of Czechoslovakia.

Embarrassingly, British archival documents released in 2013 exposed that the UK not only betrayed Czechoslovakia by allowing Hitler to invade it, but also voluntarily handed over nearly $9 million worth of gold that belonged to Czechoslovakia to Nazi Germany.  The Czechoslovak golden bullions were immediately sent to Hitler in March 1939, when he seized Prague.

The Munich Betrayal of September 29-30, 1938 is the actual date of the beginning of the Second World War, Director of the Center for Russian Studies at the Moscow University for Humanities and the Institute of System Strategic Analysis, historian and publicist Andrei Fursov underscores, citing Churchill's letter to Major Ewal von Kleist, a member of the German resistance group and emissary of the German General Staff, just before Hitler's seizure of Czechoslovakia:

"I am sure that the crossing of the Czechoslovak frontier by German armies or aircraft will bring about a renewal of world war… Such a war once started, would be fought out like the last [WWI] to the bitter end, and one must consider not what might happen in the first few months, but where we should all be at the end of the third or fourth year."

And that is not all. Incredible as it may seem, the British government actually prevented a plot aimed against Adolf Hitler in 1938. A group of German high-ranking military officials planned to arrest Hitler at the moment Nazi Fuhrer ordered the attack on Czechoslovakia. Inexplicably, the British political establishment not only refused to help the resistance but ruined its plans.

In his essay "Finest Hour Regime Change, 1938: Did Chamberlain 'Miss the Bus'?" British author Michael McMenamin narrated: "there is no historical doubt that the German resistance repeatedly warned the British of Hitler's intention to invade Czechoslovakia in September 1938… In response, however, the Chamberlain government took every diplomatic step it could… to undermine Hitler's opposition."

Whatever Chamberlain's motivation was, instead of beating the drums over Hitler's aggression in Europe, on September 28, 1938 he "proposed [Fuhrer] a five-power conference between Britain, Germany, Czechoslovakia, France and Italy, where, Chamberlain assured Hitler, Germany could 'get all essentials without war and without delay'," McMenamin wrote citing official documents, and added that Chamberlain also turned a blind eye to the fact that Germany excluded Czechoslovakia from the conference. 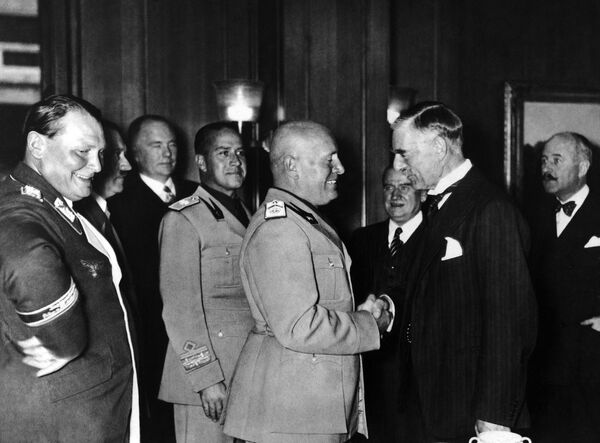 After the four powers agreed to accept German occupation of Czechoslovakia's Sudetenland before any plebiscite and coerced the Czechs to go along, Chamberlain and Hitler inked the British-German Non-aggression Agreement, the author underscored.

Interestingly enough, Professor Carley narrated that during the Czechoslovak crisis Poland (the would-be "victim" of the Molotov-Ribbentrop Pact) demanded that if "Hitler was to get the Sudeten territories, Poland should have the Teschen district [in Czechoslovakia]. In other words, if Hitler gets his booty, we Poles want ours."

So, who colluded with whom? Who were the betrayers?

Why Is West Demonizing Molotov-Ribbentrop Pact?

Post WW2 World Order: US Planned to Wipe USSR Out by Massive Nuclear Strike
According to Andrei Fursov, in Munich the four powers created a "proto-NATO bloc" that was actually aimed against the USSR. Czechoslovakia's industrial complex was meant to facilitate the growth of the German military might and ensure its ability to launch a big war against "Bolshies" in the East, in order to extend the German Lebensraum. And European elites were interested in this war, expected to exhaust both Germany and Russia.

In light of this, the only move to undermine this plan and postpone its realization was to conclude a similar non-aggression pact between the USSR and Germany. Furthermore, the delay helped the Soviet Union to accumulate its resources in the face of an inevitable invasion from the West. 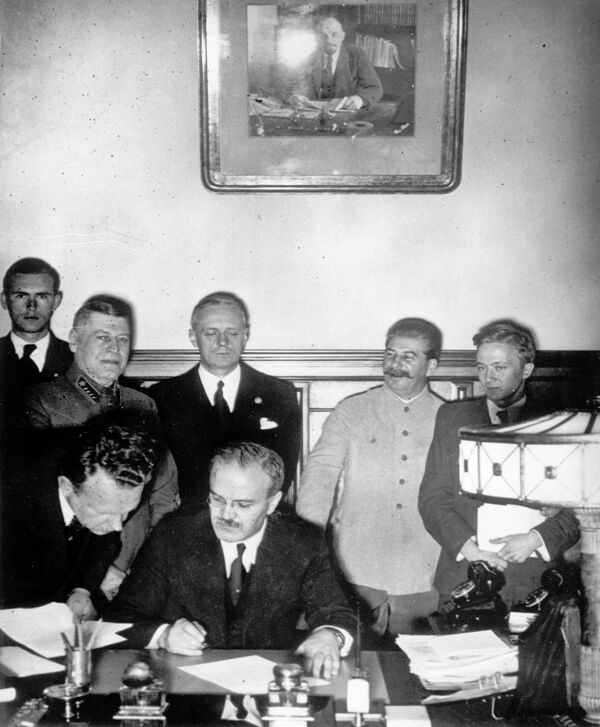 Michael Jabara Carley cited Winston Churchill, then First Lord of the Admiralty, who said on October 1, 1939, in an interview to the British national broadcaster that Soviet action "was clearly necessary for the safety of Russia against the Nazi menace."

Why then is the West making every effort to demonize the Soviet-German Non-aggression Treaty, the Molotov-Ribbentrop Pact? Professor Carley noted that it is a vain attempt to white-wash Europe's grave mistakes of the 1930s, namely the incapability (or unwillingness?) to halt the rise of Nazi Germany and to establish an anti-Hitler alliance in the early 1930s.

"These days western governments and their 'inspired' journalists, if one can call them journalists, don't worry about 'tendentious' argument when it comes to blackening the Russian Federation. It's anything goes. Should we let them equate the roles of the USSR and Nazi Germany for starting World War II? Certainly not. It was Hitler who intended war, and the French and British, especially the British, who repeatedly played into his hands, rejecting Soviet proposals for collective security and pressuring France to do the same," Professor Carley stressed.