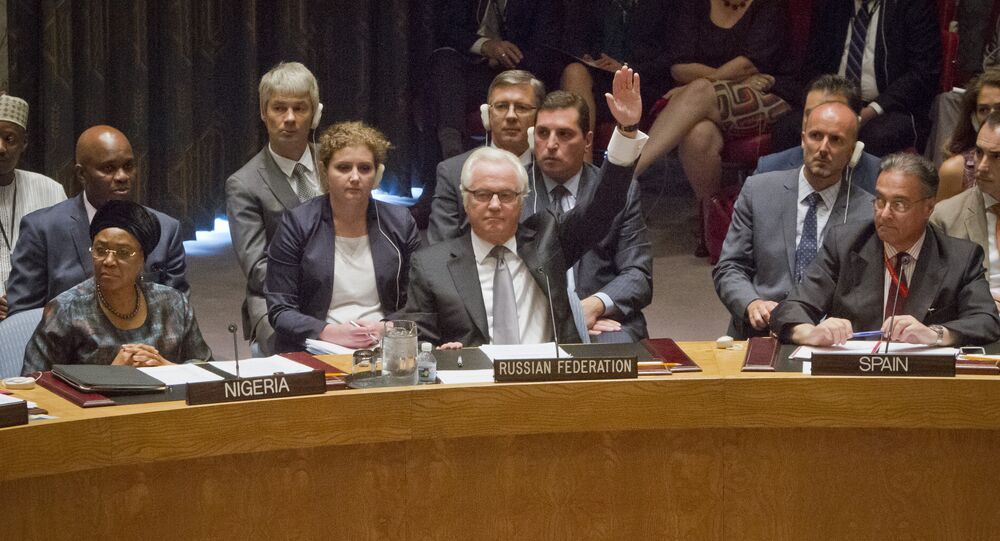 Washington's infuriated neocons are up in arms about Russia's veto power in the UN Security Council, US author Stephen Lendman notes, adding that without Russia the international organization would simply parrot decisions made in Washington.

© REUTERS / Marko Djurica
Europe's Blind Support for US' Foreign Policy Pushing EU Into Abyss
Washington absurdly claims that Russian vetoes are jeopardizing the UN Security Council's legitimacy, turning a blind eye to the fact that the US itself used its veto power dozens of times, US author and syndicated columnist Stephen Lendman emphasizes, nailing US policy makers for their utter hypocrisy and double-standard approach.

Indeed, Russia's veto power in the UN Security Council "challenges [Washington's] hegemonic agenda, blocking efforts to authorize war on Syria among other important actions," Lendman pointed out in his article for Global Research.

"US UN envoy Samantha Power is one of numerous neocons infesting the Obama administration, an advocate of endless wars dressed up as humanitarian intervention. She criticized Russian vetoes, saying they force America to "forum-shop" to further its agenda. 'If a particular body reveals itself to be dysfunctional, then people are going to go elsewhere,' she claimed," the US author noted.

In accordance with the UN Charter provisions, five countries, namely the US, Britain, China, France and the USSR (now the Russian Federation), were granted special status in the UN. Being the UN Security Council permanent members they obtained the power to veto the council's measures.

Interestingly enough, while the Russian Federation has used its veto power only 13 times, Washington has used its veto in the Security Council 79 times, according to UN records. And that is not all. America's longstanding allies, Britain and France, have used their right to veto the Security Council's measures, 29 and 16 times respectively, sometimes playing directly into hands of the US.

"Ahead of the UN's 70th anniversary next month, US-installed Ukrainian fascists want Moscow stripped of its right to dissent during this month's General Assembly session. It'll take more than a GA vote to alter the UN Charter. It requires a two-thirds majority of member states — including all P5 countries with veto power. It's unlikely any will choose to limit their own authority," Lendman elaborated.

The American columnist added that US administrations under either Republicans or Democrats are "the greatest threat to world peace."