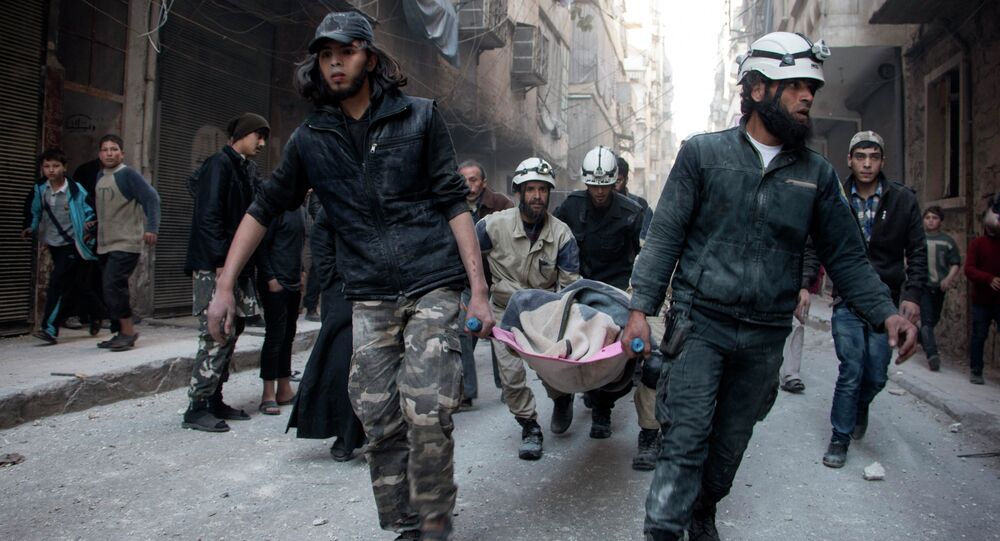 One of the largest humanitarian organizations operating in war-torn Syria - the White Helmets - has been accused of being an anti-government propaganda arm that encourages direct foreign intervention.

In an article for the 21st Century Wire news service, investigative journalist and peace activist Vanesse Beeley says that the White Helmets use search and rescue activities as a cover-up to demonize Syrian President Assad and help terrorists.

The official website of the White Helmets says that its volunteers have already saved more than 20,000 people on all sides of the conflict, adding that the organization is following the principles of humanity, solidarity and impartiality outlined by the International Civil Defense Organization.

However, according to Beeley, the White Helmets and other NGO’s such as the Syrian Observatory for Human Rights, are used to justify the West’s policy of arming and supporting the insurgency in Syria.

Vanesse Beeley spoke to Sputnik tracing back to the roots of the White Helmets, “If you look at their creation in 2013, they were set up with funding from the UK, USA and Syrian Opposition Party. We immediately have the suspicion that there will be an element of impartiality within the organization.”

According to Rick Sterling’s article on the ‘Highly Effective Manipulators, he also elaborated that the “White Helmets is the newly created name for ‘Syrian Civil Defense.’

Despite the name, Syria Civil Defense was not created by Syrians nor does it serve Syria. Civilians from rebel controlled territory were paid to go to Turkey to receive some training in rescue operations. The program was managed by James Le Mesurier, a former British soldier and private contractor whose company is based in Dubai,” Global Research reported.

© REUTERS / Alaa Al-Faqir
Syrian Army Kills 50 Al-Nusra Front Terrorists, Mostly Foreign Mercenaries
The claims regarding the number of people trained by the White Helmets and the number of people rescued are quite different. “The numbers are probably highly exaggerated especially since rebel-controlled territories have few civilians. A doctor who recently served in a rebel-controlled area of Aleppo described it as a ghost town.”

The White Helmets work mainly with the rebel group Jabat al Nusra (al-Qaeda in Syria). There are videos of the recent supposed chlorine gas attack which starts with the White Helmet logo and ends with the logo of Nusra. In reality, White Helmets is a small rescue team for Nusra/al-Qaeda, Beeley said.

During her interview with Sputnik she gave further examples of the leaked videos that show that White Helmets do more than just rescue people.

“If we at least start making people question this propaganda and if we make people appreciate that it is a very one sided story that is being portrayed to them, then we are breaking some strangle holds of these narratives,” Beeley told Sputnik.