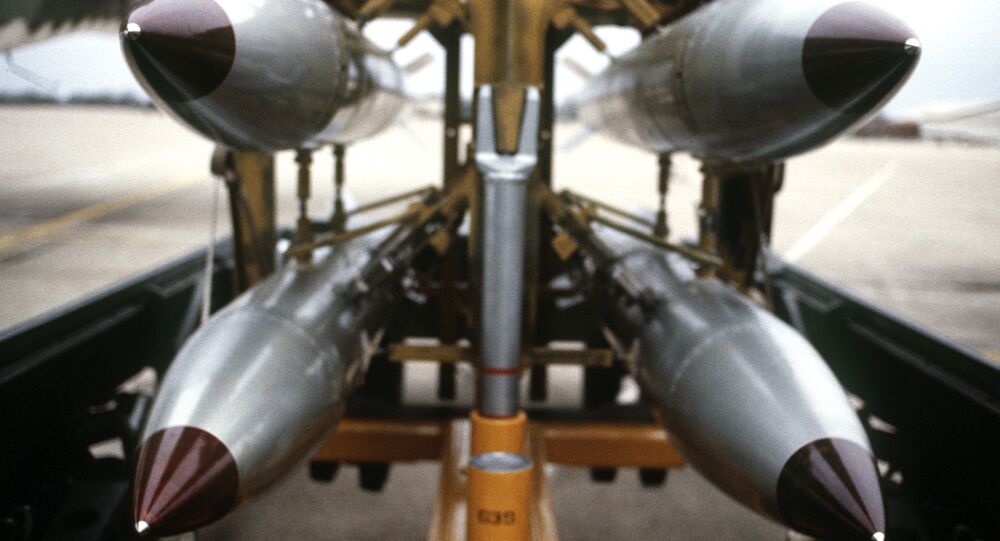 US neocons are deliberately aggravating tensions with nuclear-armed Russia and thoughtlessly pushing the world to the brink of an all-out nuclear war, US veteran foreign policy consultant Dr. William R. Polk warns.

Washington is moving back toward a Cold War-style confrontation with Moscow over Ukraine, apparently forgetting that Russia still possesses a nuclear arsenal as large and as deployable as the US', US veteran foreign policy consultant, author and professor William R. Polk stresses.

"Decisions on nuclear weapons are and will remain the most important part of our quest for world security since even small mistakes or wrong actions would probably be catastrophic. We now seem to be moving closer to the danger point of provoking their use," Professor Polk wrote in his article for Consortiumnews.com.

© Sputnik
Soviet Nuclear Test of 1949 Dealt Heavy Blow to Pentagon's War Plans
According to the US veteran foreign policy consultant who served in the State Department's Policy Planning Council during the Cuban Missile Crisis of 1962, a 13-day standoff between the United States and the Soviet Union, when the future of the world was hanging in the balance, became a terrible ordeal for both the United States and the Soviet Union.

"I do remember, however, a terrible episode – fortunately lasting only a few minutes – at which I thought to myself, 'let's just get it over with.' When later I met with my Soviet counterparts, I got the impression, although they denied it, that my feelings were not unique," he narrated.

© Flickr / The Official CTBTO Photostream
US Media Fears Ukrainian Crisis May Lead to Nuclear War
To complicate matters further, technical mistakes are also possible, Polk noted, referring to the fact a nuclear bomb was actually dropped on America ("by a US Air Force bomber flying where it should not have been while carrying a weapon it should not have been carrying"). Fortunately, due to the fact that the firing mechanism was faulty the bomb did not explode.

"For years, as former Secretary of Defense Robert McNamara observed, we have had at least 500 missiles armed with nuclear weapons on 'hair trigger' alert in Europe. If you multiply the number of missiles by the number of months, the scattering of sites over a large area and continuous changes of personnel, it is obvious that even the best designed systems of command and control are always fragile," the professor elaborated.

However, it seems that Washington neocons do not realize the danger posed by nuclear weaponry and a possible nuclear standoff in the world.

"We are moving back toward a confrontation with Russia over Ukraine. And, while Russia is not so formidable as it appeared a generation ago, it still has a nuclear arsenal as large and as deployable as ours. Led by us, NATO is moving into areas of great sensitivity," the professor warned, adding that it is time to take the situation at its face value.